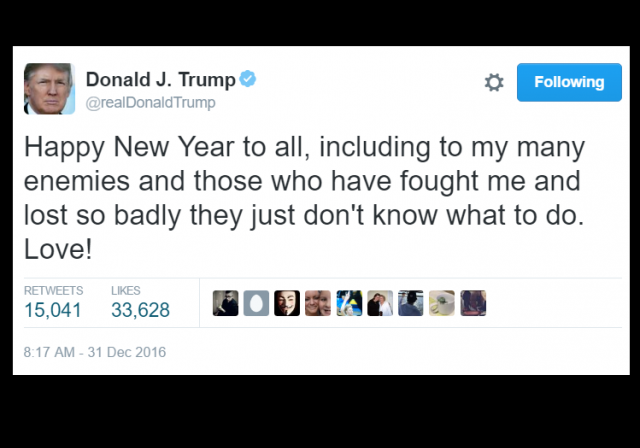 Not sure if this is The Donald’s last tweet of the year, but this tweet is a classic at so many levels.

Reminds me of what now is one of my favorite video clips:

I love John Milius and his Conan screenplay but the original quote was adapted from the Harold Lamb’s biography “Genghis Kahn: The Emperor of All Men.”

‘One day in the pavilion at Karakorum he [Genghis Kahn] asked an officer of the Mongol guard what, in all the world, could bring the greatest happiness.

“The open steppe, a clear day, and a swift horse under you,” responded the officer after a little thought, “and a falcon on your wrist to start up hares.”

“Nay,” responded the Kahn, “to crush your enemies, to see them fall at your feet — to take their horses and goods and hear the lamentation of their women. That is best.”‘

Makes you wonder where John Milius came up with the name of the character Subotai?

Heh! And at least I’m not dreading January 20th…like I have the last 8 years.

Man, how I wish Johnny Carson was alive. Donald Trump would surely give him plenty of material. Alas, it’s not to be. However, here’s a vid of him and Ronald Reagan from 1975.
https://www.youtube.com/watch?v=hDwCTKXCFW4&list=PLCBEE115DD85084D5&index=3