Yes, but Terry Branstad has a 30 year friendship with Chinese President Xi Jinping.

President-elect Donald Trump has chosen Iowa Governor Terry Branstad as Ambassador to China, who has a strong relationship with Chinese President Xi Jinping. Ian Millhiser at Think Progress took a shot at the decision because, you know, no matter what Trump does the liberals will hate it.

Millhiser responded to Trump’s pick by saying that the governor from a “landlocked state full of white people” does not know enough about China. Let’s tell him a bit about Iowa and China’s relationship! 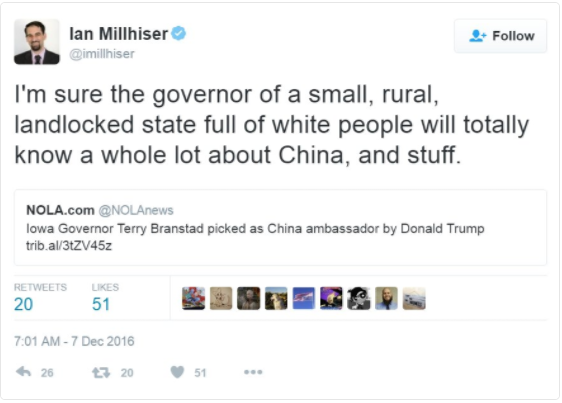 Maybe Millhiser should research before he says anything because not only will Branstad’s friendship with Xi come in handy, but so will the economic ties between China and Iowa. Yes, the country and state:

China is Iowa’s second-largest export market, behind Canada. Figures from the U.S.-China Business Council show Iowa exported $2.3 billion in goods and $273 million in services to China in 2015. Crop production accounted for some $1.4 billion of the exports. Agricultural machinery, chemicals and other products were also sold.

Not only that, but let’s look at other ambassadors. Max Baucus currently serves as ambassador to China under President Barack Obama. Guess his home state! MONTANA. Jon Huntsman was born in California, but grew up in…UTAH! Joseph Prueher and Jim Sasser served as ambassadors to China. Both are from Tennessee.

Unlike Millhiser, the Chinese welcomed the news:

“First of all, I would like to say that Mr. Branstad is an old friend of the Chinese people and we welcome him to play a greater role in promoting Sino-U. S. relations,” spokesman Lu Kang told a regular news conference.

“The U.S. ambassador to China is an important bridge between the U.S. government and the Chinese government. No matter who is in this position, we are willing to work with him to push forward the sound, steady and steady development of Sino-U. S. relations.”

This could help relations since Trump rattled China a bit when he spoke with Taiwan President Tsai Ing-wen last Friday. His transition team called it a courtesy call, but the Chinese lodged a protest with Washington:

“It must be pointed out that there is only one China in the world,” the Chinese foreign ministry said in a statement on Saturday, adding that it had lodged “solemn representations with the US”.

The call forced the White House to tell China that America still abides by its “one China” policy.

Xi struck up a friendship with Branstad on a visit in 1985 on an agriculture trip, which has lasted over 30 years. Xi returned in 2012, right before he became president of China, and Branstad hosted a dinner for his old friend. Branstad has also “visited China four times in the past seven years.”

Branstad became a regular figure in Iowa for Trump during the campaign with his son Eric serving “as state director for Trump’s campaign.” In early November, Trump told Branstad that he “would be our prime candidate to take care of China” at a rally in Sioux City.

What an idiot. And what a blatant bigot. Tell me again, Mr Millhiser, how you don’t despise “fly-over country”. And explain to me, please, how someone whose background consists entirely of living in Hawaii, Indonesia, New York, Boston, and Chicago could possibly represent America.

Why do I care about the opinions or critiques of any democrat on this issue?

In the past 8 years China has caused our stock market to tumble hard at least once, they have harassed our military vessels, and have done a land grab out in the ocean to further muscle other countries out.

We did it their way for too long, now let’s fill these ambassador seats for reasons other than political favors for large donors from the campaign trail. I’m sure what’s her face from the Kennedy family will find some way to fill her empty days.

As an Iowa native and current resident, I find Mr. Millheiser’s comment a perfect example of why the Democrats were thoroughly beaten all over the map.
I live in Dubuque County, a strong blue-collar, union-friendly area of the state, where the presidential votes in 2016 went to a Republican for the first time since 1956, 4 years before I was born.

That is a perfect display of the tone-deaf members of the coastal elite.

Don’t let the door hit you in the ass on your way out.

Judge people by the color of their skin, not the content of their character, right?

Class diversity is one step forward, two steps back.

This just keeps getting better. Knock over the ant farm, and watch the lil’ devils scurry about.

The call forced the White House to tell China that America still abides by its “one China” policy.

Sure. The Obama White House. The one which is on its way to the ash heap of history. Forty-four days and counting …

My idea of diversity is having 7 different restaurants to choose from. Chinese will always be a good option. However they could tone down the Sechwan spices and their behavior toward Taiwan.

“Maybe Millhiser should research before he says anything”

Ssssh. This blind smug ignorance is why they lost the election. Please don’t help them.

And last I checked, ThinkProgress was mostly white people too.

Ah irony. We are going to need more words for it. The Freemen have 52 for “sand” 😉

A landlocked mind populated by a single color idea seems to be more of a problem.

For the life of me, I can’t understand why Democrats got wiped out in the Midwest this year. /sarc

More seriously, as both a Trump-skeptical Republican and the son of a Nebraska farmer, I welcome this pick. The Midwest and Plains have a lot at stake with Sino-American trade relations because we export so many ag products to them. Trade missions to Asia are in the news all the time here, and plenty of people have been worried about a trade war. So, no, we’re not all clueless hayseeds, and I think Branstad will do a nice job.

I hunt on a couple farmers properties, they’re sharper than any TP (initials are pretty accurate for that site) could ever hope to be.

Ironic that it was this landlocked state of white people who made it possible for our first black president to accelerate his momentum in 2008.

We’re witnessing fascinating sociological and psychological phenomena, in the form of Leftists’ infantile histrionics in the aftermath of Trump’s election, as well as their continued infantile and smug belligerence and bromides against rural Americans in “flyover country,” which behavior not only smacks of rank bigotry, but, also, insecurity.

It is becoming increasingly clear that Leftists lack the introspection and the humility to really own up to their failures in the last election, choosing instead to double down on their idiotic and intellectually stunted elitist antics.

It might be fun to form up a sweep line on the eastern border of California and push the libs into the ocean.

Well, Iowa is landlocked and is 91.3% white, but I totally disagree with what this moron implies by it.

Wasn’t there someone who came from an exclusive land-locked town/county which had a white percentage of 92%, well, well above that of Ohio, and who wanted to be president, not simply a mere ambassador?

Once again. She is most emphatically NOT a New Yorker. She simply owns a house here and uses it as a legal address. She’s never actually lived in New York.

Research before speaking? You assume too much – liberals don’t care about facts or logic. Feelings and emotions are all that matter.

So my first question was Who is Ian Millhiser and why does his opinion on this issue worth more than a fart in the wind?

ThinkProgress. Uh-huh. Wake me up when somebody important who knows what they’re talking about and isn’t just echoing the DNC faxes says something.

“President-elect Donald Trump has chosen Iowa Governor Terry Branstad as Ambassador to China, who has a strong relationship with Chinese President Xi Jinping.”

How about: President-elect Donald Trump has chosen Iowa Governor Terry Branstad, who has a strong relationship with Chinese President Xi Jinping, as Ambassador to China.

I point this out because this is the second error of this type made by this author in as many articles.

It is a style choice rather than an error, since it leads to no confusion. There aren’t enough choices as to whom the pronoun ‘who’ refers to – either Trump himself, which wouldn’t make much sense, or to Branstad.

Some nits aren’t pick-worthy, and Chastain is a fine writer.

The Mississippi River forms the eastern border of the ‘landlocked’ State of Iowa. All that corn and ethanol shipped via barge to destinations both national and international just doesn’t account for much where Millhiser comes from.