From The Technion, in Haifa, Israel. 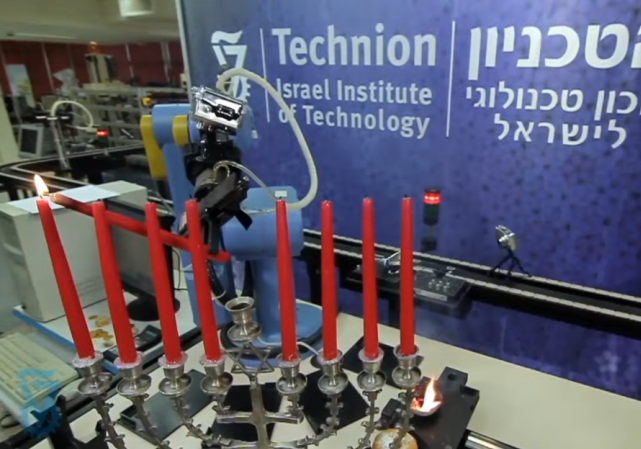 In the second century BCE, the Holy Land was ruled by the Seleucids (Syrian-Greeks), who tried to force the people of Israel to accept Greek culture and beliefs instead of mitzvah observance and belief in G‑d. Against all odds, a small band of faithful Jews, led by Judah the Maccabee, defeated one of the mightiest armies on earth, drove the Greeks from the land, reclaimed the Holy Temple in Jerusalem and rededicated it to the service of G‑d.

When they sought to light the Temple’s Menorah (the seven-branched candelabrum), they found only a single cruse of olive oil that had escaped contamination by the Greeks. Miraculously, they lit the menorah and the one-day supply of oil lasted for eight days, until new oil could be prepared under conditions of ritual purity.

To commemorate and publicize these miracles, the sages instituted the festival of Chanukah.

On Hanukkah eve this year, the UN with Obama’s connivance and consent just declared Jewish control of the area of the Second Temple to be an illegal occupation.

The Technion – Israel Institute of Technology, in Haifa, Israel, often is referred to as Israel’s MIT. Several years ago, some students at Technion created a video of “Rube Goldberg” style Hanukkah candle lighting. The video now has over 500,000 views on YouTube, and probably millions more on Facebook and elsewhere:

Technion students Eyal Cohen and Tomer Wassermann from the Mechanical Engineering faculty and Matan Orian and Dvir Dukhan of Industrial Engineering and Management take on the challenge to build a Rube Goldberg machine that lights the Chanukah menorah. Hanukkah is the holiday of miracles and here is another one.

WATCH BEHIND THE SCENES (the making of the film):
http://www.youtube.com/watch?v=ua8Fs9…

Eyal Cohen and Matan Orian are winners of the annual Technion Dr. Bob’s TechnoBrain competition, supported by Dr. Robert Shillman in memory of Technion student Neev-Ya Durban. The film was made in the Computer Integrated Manufacturing and Robotics Laboratory in the William Davidson Faculty of Industrial Engineering and Management

Follow this link to learn more about Technion: http://pard.technion.ac.il/

This year, the Technion released an edited video cutting the lighting time down to under a minute, for those of you who are too impatient to wait to see the result:

Nice! One question: what’s the donut for?

In Israel, doughnuts are traditional on Chanukah (and nowadays for about two months leading up to Chanukah 🙂 ).

Rube Goldberg devices are always fun to watch. Here’s a great one, set to music: