The 1980s are calling, they want Nate Silver’s Nuclear Holocaust Map back

The 1980s are calling, they want Nate Silver’s Nuclear Holocaust Map back 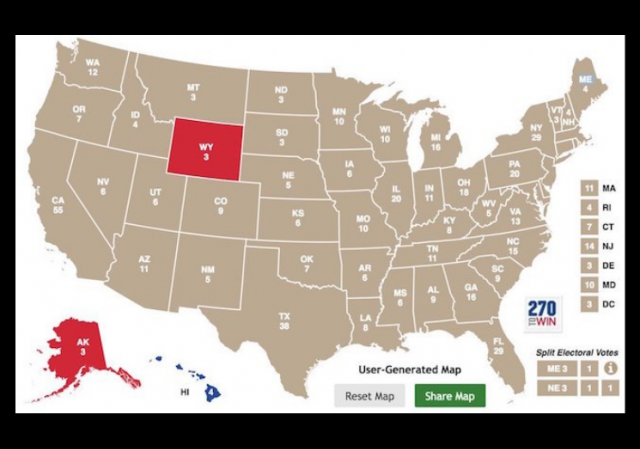 I heard Rush talking about this the other day.

Trump allegedly is the End of the World, because of this tweet and his phone-in with Mika Brzezinski (which Mark covered, ‘Let It Be an Arms Race: We Will Outlast, Outmatch them All’):

Nate Silver wanted to figure out the state in which you are least likely to die. 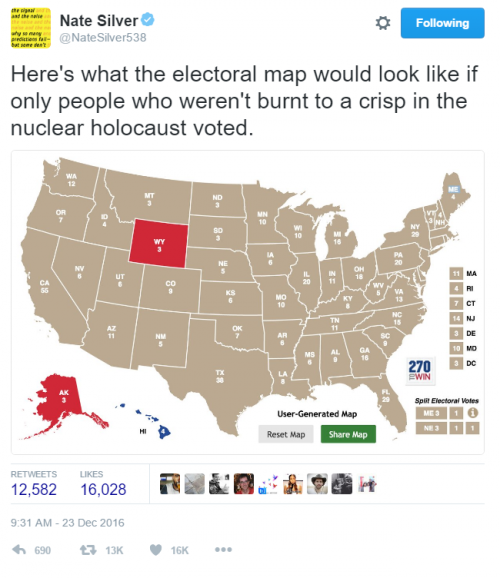 Rush explained that Trump’s tweet was a response to Putin talking about streghthening Russia’s nuclear arsenal, and this was Trump calling is bluff. The reaction was the same type of freak out Reagan experienced when he challenged the Soviets. Being tough was not the risk, not being tough was the risk.

I am watching the history of the eighties begin to repeat itself.  For those of you that were not old enough in the eighties when Reagan was president, or for those of you not yet born, do not doubt me.  What is happening here as the result of one Trump comment on the nuclear arms race involving Putin and Sean Spicer, it is identical, the left is, to the way they were panicked and afraid and just basically unhinged back in the 1980s.

In the 1980s, the threat, according to the left, was Reagan.  Reagan was a dunce, an idiot, a cowboy, and he cracked jokes about bombing the Soviet Union, and he hated communism and he thought that it ought to be done away with. And so the learned people in our country and in the U.K. and what then became the European Union, all believed that the savior, the salvation, the lone hope to avoid a nuclear holocaust was whoever was running the Soviet Union….

You ought to see Nate Silver, the FiveThirtyEight, the pollster guru.  He’s got a chart of the only people that would survive a nuclear blast.  It was one red state. (laughing)  I mean, this is hysteria.  Oops.  It’s impossible have everything within arm’s reach here.  Okay.  Headline: “Nate Silver’s Post-‘Nuclear Holocaust’ Electoral Map Goes Viral.”…

By the way, folks, let me make an observation to you.  Has the media once, have they once been concerned about a nuclear arms race with Iran?  They’ve not, have they?  I mean, the president of the United States has actually negotiated a deal that permits the state sponsor of terrorism, largest state sponsor of terrorism acknowledged by everybody in the world, Iran, to ramp up and get nuclear weapons.

Is the media, is the Democrat Party, anybody worried about that nuclear arms?  No way, because Obama’s involved and we don’t dare criticize Obama because Obama’s smarter than all the rest of us.  What Trump is doing is shutting down the expansion of nuclear weapons that Putin is engaging in because of Obama!  Obama has unilaterally chosen to disarm or reduce our nuclear arsenal without getting appropriate concessions from Putin or anybody else while ramping up the Iranian nuclear program.

I’ll explain this to you, but the upshot of this is that Putin has blinked in response to what Trump said about, “Let’s have an arms race” because Putin knows they lost the last one.  They can’t keep up with us.

Rush followed up with Putin’s capitulation:

Having been forced to move from my home state due in very large part to Jimmy Carter’s economic and energy policies, I followed Reagan’s first term run (1979) closely, my first entree into politics of any depth. I was 24 years old. Anyway, I remember well how the primary Democrat line against him was that he was a cowboy who’d get us all killed, that he shouldn’t be allowed anywhere near the nuclear codes. Same as with Goldwater. Same as with Bush I (if only as an extension of Reagan). Same with Bush II, held out as a literal Texas cowboy who’d get us all fried. Same as with Trump, (or Cruz, or Walker, or any other Republican anywhere close to being a legitimate candidate for the GOP nominatiuon).

Wrong on Nixon. He was dangerous on everything. Why, he even agreed with McCarthy that there were communists embedded in government!

Right on Nixon. He was not primarily attacked as a dangerous nuclear cowboy. You’re right, of course, that GOP or conservative candidates are attacked on everything, but each usually had a main line of bullshit attack.

Nixon had some flaws, but he did have the courage to put B-52’s over North Vietnam and bomb the crap out of them. All the other crap I can forgive. He ended Johnson’s war.

I was at a Christmas party last night and one of the libs was worrying about a “nuclear Armageddon”. I commented that nuclear weapons were just big bombs and he fell into the trap. He said, but…but…the radiation poisons the city for decades to come! I had him at that point. “Have you ever seen the comparison between Hiroshima and Detroit? I asked. It shows Hiroshima as a thriving city fifty years after it was bombed, and Detroit in ruins fifty years after the Democrats took over. I was proud of myself LOL!

Yes, a nuclear blast is pretty much just a bunch of angry air, squished into a shock wave (which is why it’s so angry). Fortunately the inverse square law is our friend, and we don’t have to go all the way to Wyoming to take advantage of that.

By far the dumbest comment I’ve read in a while.
Do a little research and find out why the soil in Nagasaki and Hiroshima don’t have high levels of radiation.

If we have another nuclear build-up then maybe NASA will be allowed to develop nuclear space power also this time. It’s been a long, painful wait.

I can envision Obama signing up to be a Community Organizer for a gang in Chicago, after he leaves office. His first, self-appointed, task: Reduce gang violence. I can imagine how that would go: “Hey, everybody, we’re losing too many of our members in street-fights. I have an idea to end the cycle of violence. Let’s just give up our weapons, and lay them on the ground, the next time we encounter our rival gang. Surely that will make us less intimidating to them, so they won’t want to attack us. Then, we can all go out together for an espresso and some arugula.”

Missileers at F.E. Warren AFB in Wyoming control 150 Minuteman III nuclear missiles. Without a doubt, Russia has many of their missiles pointed at our silos. I don’t know where this asshat came up with his map, but Wyoming would have nukes land within its borders if fecal matter hit the rotating metallic blades.