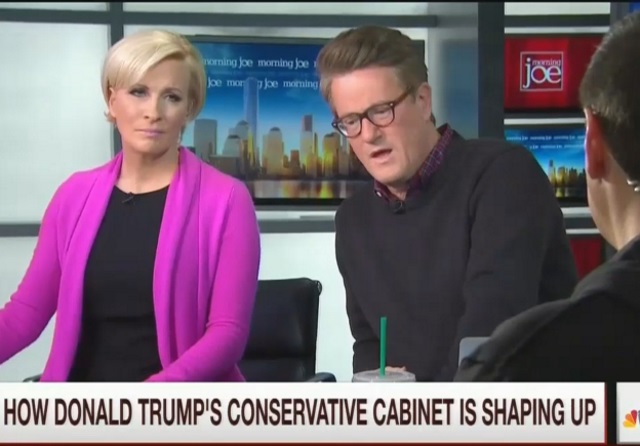 Donald Trump’s nominations have turned out to be a pleasant surprise for some of his biggest conservative critics. That was Joe Scarborough’s take on today’s Morning Joe. From James Mattis at Defense, to John Kelly at DHS, and now to EPA foe Scott Pruitt . . . at EPA, the President-elect has proposed people with strong records and in a number of cases, strong conservative philosophies.

So much so that Scarborough remarked: “How fascinating that the Never Trumpers and the Wall Street Journal editorial page and the Bill Kristols, and all the people who were rightly the most skeptical of Donald Trump during the primary, have to sit back going, wow, I would not have gotten this with Jeb or Marco.”

From the Department of GMTA: my Quick Hit of this morning [composed last night] reads: “James Mattis as Secretary of Defense, and now border-security hawk John Kelly as head of DHS and Scott Pruitt for EPA? I’m guessing that many conservatives who had serious qualms about Trump are feeling a lot better tonight.”

MARK HALPERIN: Who is going to drive policy in this administration in education and EPA and Attorney General and DHS? He’s nominated very sharply ideological activists who Ted Cruz I don’t necessarily think would have had the follow-through to nominate.

JOE SCARBOROUGH: And Elise, I remember before you were talking, right before the election, you were saying, gee, look at this. Newt Gingrich, Mike Huckabee, Rudy Giuliani. This is scaring me. I think that’s what most people — and maybe some people that ran golf courses were the people that we were joking about would be head of agencies. He’s not gone that direction. You’re not seeing Newt Gingrich. You’re not seeing Rudy Giuliani.

JOE: Ben Carson. But again, like we said, in Ben Carson’s defense, even he says he’s not qualified to do it. So the expectations —

JORDAN: Which is exactly why you appoint someone!

JOE: Exactly. I have a story I’ll tell off-camera about telling somebody I wasn’t ready for something [and they said], well that tells me that you are ready for it. But anyway, but again. How fascinating that the Never Trumpers and the Wall Street Journal editorial page and the Bill Kristols, and all the people that were rightly the most skeptical of Donald Trump during the primary, have to sit back going, wow, I would not have gotten this with Jeb or Marco.

I was just thinking it myself when Insaw the Pruitt announcement.

I literally thought – except for possibly Cruz – not Little Marco, Low Energy Jeb, none of these guys would have picked as strong an EPA head.

I am loving Trump’s picks. The humiliation of meeting with Gore before announcing Pruitt. Perfect.

I still haven’t figured out the Ivanka “climate change czarina” rumors angle but other wise – perfect.

Perhaps she’ll be the “climate change czarina” and go around the country fast-tracking approvals for new nuclear power plants.

He’s kicking ass and hasn’t even taken office. The professional politicians should be careful about getting caught on the tracks.

About the Flyns’s…..Mnuchin, dem………Mattis…..needing a waiver……Kelly…unknown positions at this time.
And then there is the Wrestling gal. One of the largest donors to the trumpac.
Meeting with DeCaprio to talk green jobs?
Going after the unionist, ala Obama attacking Joe the plumber.

Color me waiting to see what he DOES.

Going after the unionist?

Like checking about “union” time and pay tied to performance?

Like not allowing them to “appeal” under any circumstances their firing?

For almost the entire Republican primary, the alternative to Trump wasn’t Rubio or Bush, it was Cruz.

tyates, apologies: I hit the thumbs-down button but meant to hit ‘reply!’ It’s funny how the whole primary drama quickly starts to feel like ancient history, though it’s good to remember.

Thanks, for a second I thought I had offended someone on the Internet!

Every day Trump doesn’t screw up, he proves NeverTrumpers wrong, just like every day Trump isn’t a racist or starts WWIII based on a tweet, he proves liberals wrong. Nobody is going to have a Road to Damascus conversion based on his few weeks as President-Elect so far, but the first hundred days should be educational, and we’ll all have a pretty good idea what to expect from his this time next year. Maybe the better debate is on just how low the bar has been set for him at this point.

Also last I remember, Joe was telling Republicans they should have nominated Jon Huntsman in 2012, so if he’s climbed on board the Trump train now, my guess is he’s looking for an interview.

You beat me to it, but yeah… nevertrumpers certainly did not want Jeb Bush or Marco Rubio, so the whole point here is mistaken.

Not sure if the assumption is that Cruz supporters became never-Trumpers, but honestly, that doesn’t feel like truth. The NT always felt like establishment types to me, not conservatives. I’m sure there were some, but what actual conservative would sideline themselves when the outcome might be a Clinton presidency?

If the house catches on fire, does a conservative, realizing that he or she can’t save everyone in the house, simply saw “screw it” and let it burn? No, they do their best to save as many as possible from the fire, because that’s the bedrock meaning of conservatism. Does anyone want to argue that having Trump president rather than Clinton was a net loss to conservatism? That being the case, and I know this is a hard thing, sitting out the election amounted to an act of defiance, rather than a principled conservative stand. Conservatism doesn’t count it as a win if you lose something that was good (for example, SCOTUS integrity). Accepting (for sure) short term losses in the hope of (possible) long term gains is wishcasting. Doing it to punish your family rivals by inflicting them with a victory by the enemy isn’t principled.

The whole problem is that everyone has their own definition of what a ‘Never Trumper’ is, and no matter how one defines them, it’s wrong to assume they think and act in lockstep. Too broad a bush, similar to how Baby Boomers and Millenials are regarded, where it is also untrue they proceed in lockstep.

too broad a BRUSH. Thx, Sigmund.

Cruz lost to Trump. Couldn’t come close to the nomination and would have lost to Hillary. Trump worked harder than any Republican candidate in my lifetime.

Do you think he worked smarter?

Confounding his critics and confusing the enemy.

PS – you wouldn’t have got this with Cruz because he couldn’t defeat Clinton. Only Trump lacked the baggage that enabled him to get dems in PA, MI, etc and do the end around he did.

How safe, easy – and cowardly – it is to make claims that cannot be checked.

Easily proven, Henry. You and your colleagues are the baggage that keeps conservatives like Cruz from getting elected. The unwillingness on your part to settle for 80%, to compromise, to make a deal and come back later for the rest destroys your best candidates. Decades of election history proves me right.

More crystal ball doesn’t support former crystal ball. You haven’t a clue what Cruz may have done, nor do I. Nobody does.

We can measure your accuracy by pointing out I was a Scott WAlker supporter, but if that doesn’t match your errant presumptions, by all means, change it to whomever you wish.

Go for it, Henry. As brave and smart as you are you should be able to pick a winner next time.

You are a wonderful salesman for the failed GOPe. Oh, wait. That was last week. Now you’re a salesman for Trump and against the dreaded GOPe. As I said, you repeatedly reveal yourself as a plitical coward, and not a very bright one at that.

Henry,
I tremble in fear at your manly assault on my character.
Oh, wait – that was LMAO, not trembling.
Never mind.

“More crystal ball doesn’t support former crystal ball. You haven’t a clue what Cruz may have done, nor do I. Nobody does.”

True, no one can be absolutely certain. The thought, however, is valid given recent history. It’s a judgement.

Do not doubt what Ted Cruz or us Tea Partiers could have accomplished or what we will continue to hammer on. While Trump wasn’t my first choice in the primaries, he was the only choice in November. I’ll be cheering him along and hoping for the best.

We line up pretty closely. I am watching with interest. My cynical side says Trump will “mature in office” (sell us out) but my optimism says he will do some good things.

Add Pudzer to the list. A traditional repub might have picked Walker and gotten solid results – but I think this one is excellent to talk a sitting CEO into taking this role. This guy cares about the country not his career. I like that he took high profile positions as a public company CEO consistently and fearlessly. He is another nail in the coffin of Obamacare. He hates it and will make sure it’s repealed.

As far as will Trump follow through – I don’t think people of this caliber will fall in line to be sold out. Pruitt, Pudzer – they will not shrink from the fight.

will Trump disappoint or make a decision I disagree with? – and where I’m right, of course 🙂 – Yes, surely he will.

But you can’t look at these picks and not think these are awesome picks. And there is no reason to doubt they will do anything but a great job right now just because he’s not “your candidate”

I voted for him to do these sorts of things – and he’s doing it – appointing those who are loyal and great for the role.

He gets the benefit of any doubt when his actions are good – and appointments are action. Meetings and speculation are not.

Rubio wouldn’t have had the nerve and Jeb! is no conservative.

One of my hopes is that Trump is putting together a team that could revitalize inner cities and making our cities the envy of the world. Carson in HUD and Devos in education. Great schools and good housing could do it.

Nothing against Trump on this, but if Jesus was president, two terms wouldn’t be enough to fix what 50 years of Democrat rule has done to American cities.

Henry, the best we can hope for with the inner cities is that they are shown how much better life is when you work for goods and services rather then accepting the government hand out. Once they get on that track to learning the worth of things maybe, just maybe, they’ll get out of self destruction and start caring about their communities. Working with the police like the guardian angels and dropping the snitches get stitches bs. Hopefully Dr Carson can get the Democratic plantation owners of Chicago, Detroit, etc to stop social engineering and focus on vocational and trade schools, keep the next generation from accumulating crippling college debt and out of the dead end jobs of fast food.

That should be the next I have a dream speech.

He will fail – as would anyone – as long as Democrats are automatically elected to mayorships and city councils.