Joe also ridicules Olbermann for recording podcasts ‘in his bathroom’ 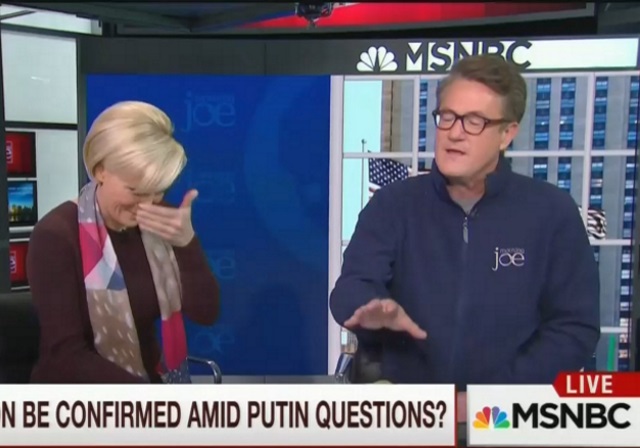 Some feuds die hard. Joe Scarborough and Keith Olbermann have one going back to at least 2008, with another flare-up in 2012. Scarborough’s got the bigger mic now, and he wielded it on today’s Morning Joe to mercilessly mock Olbermann as someone suffering from delusions of Nazi tomatoes that talk to him.

The context was Mika Brzezinski role-playing Rex Tillerson being questioned during his Senate confirmation hearing. Joe played the committee chairman, but couldn’t help himself from launching into an Olby impression, with his trademark “Sirrr!”, then riffing “you do know that he calls tomatoes, that he thinks are staring ominously at him, Nazis? You know he does that? . . . Because they keep talking to him in German. The tomatoes in his kitchen. It really disturbs him.”

Scarborough also ridiculed Olbermann for recording his podcasts “from his bathroom.”

JOE SCARBOROUGH: Who are you?

JOE: You’re Rex. Are you concerned, Rex—by the way, Rex, I like what you’ve done with your hair since you’ve left Exxon. It’s grown out. You look younger, more vivacious.

MIKA: Question. Stick to the question.

JOE: So the question is, sir, [begins Olbermann impression], sirrr! The question is, [in Olbermann voice] is that tomato across the hall from you a Nazi? I’m sorry. I got too much into his mode. Sir. You do know that he calls tomatoes, that he thinks are staring ominously at him, Nazis? You know he does that?

JOE: Olbermann. He looks at a tomato in his kitchen and goes: you’re staring at me ominously. He is a Nazi! All right. So anyway, Rex, back to you —

JOE: It’s Keith Olbermann. He thinks tomatoes [inaudible] because they keep talking to him in German. The tomatoes in his kitchen. It really disturbs him. But anyway [uncontrolled giggles] —

JOE: Rex, are you concerned Rex — I mean, he does those podcasts from his bathroom.

JOE: How was that role-playing?

WILLIE: It was fun!

JOE: So let’s do that next block. I am going to be Keith Olbermann and you be the Nazi tomato that’s talking to me.

JOE: How does he get the lights in his bathroom?