Scarborough says Bolton at State Department would be “absolute disaster” 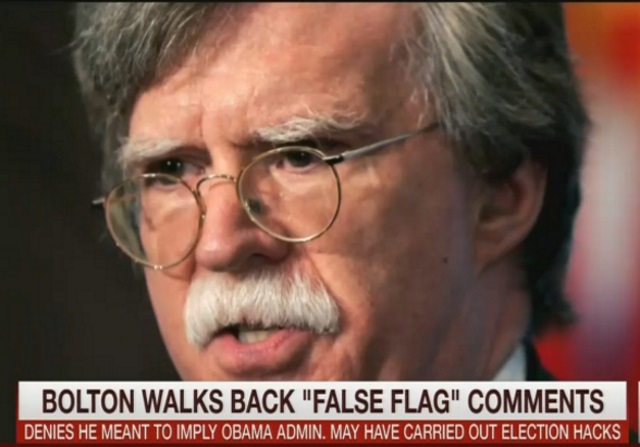 Scarborough blamed “neo-cons” for boosting Bolton, singling out Sheldon Adelson. Said Scarborough: “he needs to tell Sheldon Adelson, sorry, I love you buddy, and I’ll play blackjack out at your casino, but I can’t let you destroy US foreign policy because you like this guy.”

Scarborough’s beef with Bolton focused on his hawkish approach to foreign policy, noting that he was one of the few in the foreign-policy community still saying that the invasion of Iraq was a good idea. Scarborough suggested that Bolton’s stance would put him at odds with Trump, who made his opposition to the Iraq war a key element of his campaign.

Scarborough and company also sharply criticized Bolton for having recently suggested that the hacking into the election might have been a “false flag” operation. Asked whether he was suggesting that a US agency might have been involved, Bolton said “we just don’t know.” Bolton later said it was a misrepresentation of his position to say that he was accusing the Obama administration of involvement in the hacking.

MIKA BRZEZINSKI: By who?

WILLIE GEIST: Well let’s hope. We’ve all said that Donald Trump is the last guy in the room, right? He trusts himself above all. Let’s hope he trusts himself not to put this guy in. I invite our viewers to go back and read John Bolton’s comments, recent comments about the Iraq war and see they think he might do with Iran or another country like that. He believes despite everything we know about Iraq, that it was still a good idea to go in, that the world was better because Saddam Hussein is not in it, and that’s enough for him.

JOE: [imitating Trump] I was against the Iraq war. So if he puts one of his most important selections, a guy who still thinks — one of the few people that still thinks invading Iraq and losing thousands and thousands of lives and trillions and trillions of dollars, he still thinks that’s a good idea? When he had eviscerated Jeb Bush for hesitating on this during the campaign? The all Donald Trump’s doing is playing right into his critics’ hands. I think he needs to tell Sheldon Adelson, sorry, listen, I love you buddy, and I’ll play blackjack out at your casino, but I can’t let you destroy US foreign policy because you like this guy.

As always, you can tell who the socialists and progressives fear by who they attack the harshest…I’d rather have a hawk that wants what’s best for the country then another fop for globalists like Obama picks.

If you aren’t taking Flak then you aren’t over the target!
George Patton

Bolton is an excellent pick to tag-team the Globalists at the State Department who (like Scarborough) believe they know more about everything than anyone else in the world. To fix the State Department they will have to take everything back down to the frame and sand out all the corrosive rust of arrogance. And, there will be plenty of dents that will have to be beat out with a hammer!

Patton was a tanker. The quote you attribute to him must have come from a bomber pilot.

Certainly Trump is being pressured by Emmanuel Goldstein to do all of this bad stuff.

That cursed Goldstein, no wonder we all hate him so much.

Is it time for our Two Minutes of Hate again? [checks watch]

The all Donald Trump’s doing is playing right into his critics’ hands.

Somebody is definitely worrying too much.

Scarborough being against nearly anything is a positive in my view. Bolton is a great choice, he, unlike Scarborough had all of his manhood intact.

“Neo-Cons”? “Sheldon Adelson”? Scarborough finally reveals the truth – he is a flaming anti-Semite.

Bolton is a strong pick. Associating him with the RINO establishment is silly. His support for the Iraqi invasion was principled then, and unlike most people in political life, he didn’t reinvent himself when his opinion became unpopular. Bolton was well to the right of his president, and a complete anomaly amongst the State liberals.

It’s like none of these people have heard of “Good Cop, Bad Cop.”

I normally respect Joe Scarborough, but I disagree with him. John Bolton should have been Secretary of State, not just the deputy. If he’s a “neocon,” then maybe we needed to have more of them instead of fewer (and if he was wrong on Iraq, so were most of the politicians at that time). We need strength in the world, even if we aren’t loved. I hope that Tillerson works out, but that totally blindsided everyone.