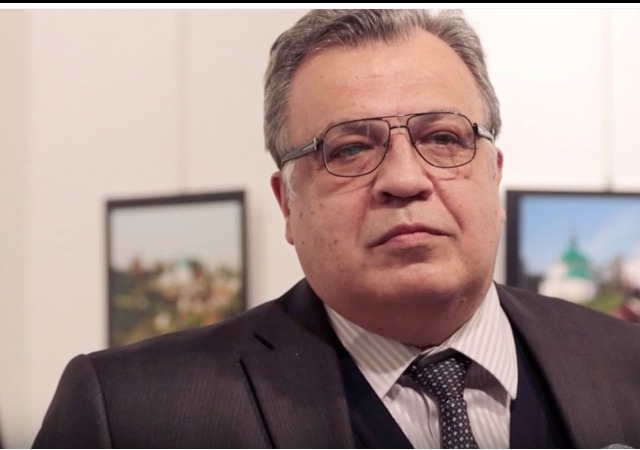 Turkish special forces police officer Meviut Mert Alintas, 22, assassinated the Russian ambassador to Turkey on Monday during the opening of a gallery in Ankara. He shouted things about Aleppo, Syria, before cops took him down. Motives immediately swirled around, but I remained interested in who Russia and Turkey blamed. Once again, the officials did not disappoint.

See, this is why it’s hard not to go all Alex Jones on Russia and Turkey because you know the officials would do anything to achieve their objective. Turkish President Recep Tayyip Erdogan desperately wants America to extradite cleric Fethullah Gulen so it did not surprise me when Turkish authorities linked the gunman to the cleric, who resides in Pennsylvania. It also did not surprise me that a Kremlin official close to President Vladimir Putin claimed NATO organized the assassination as a way to provoke Moscow.

Erdogan has blamed Gulen for anything that goes wrong in Turkey, including the so-called coup attempt this past July. One Turkish security official told Reuters that authorities found “very strong signs” that Alintas followed Gulen’s teachings and have begun to investigate links to a network of Gulen’s followers that Turkey calls “Gulenist Terrorist Organization” or “FETO.” Reuters reported:

The government says Gulen, who has lived in self-imposed exile in the U.S. state of Pennsylvania since 1999, created a “parallel network” in the police, military, judiciary and civil service aimed at overthrowing the state. Gulen denies this.

“The people he lived with before school were detained over FETO. It was determined that the people with whom he graduated from school were from a FETO team,” the senior security official said of the attacker.

“Information was obtained to the effect that people who helped him get into school were from FETO. There are very strong signs that the person who carried out this attack was from FETO. The investigation is currently focused totally on this.”

This official also noted that Alintas took a vacation between July 15-17, which is when the attempted coup happened. Reuters believes the government could “argue the timing of his holiday demonstrated foreknowledge of the July 15 coup.”

Of course Gulen has laughed off these allegations and condemned the assassination.

Authorities have arrested six people over the assassination, including Alintas’s relatives and his roommate. No one has released information on the arrests.

So while Turkey once again blames Gulen, Russia blames NATO. One could always describe the relationship between nato and Russia as tense, but it has skyrocketed since Russia invaded Ukraine in 2014. NATO has become one of Russia’s favorite boogeymen and an easy scapegoat. Senior Kremlin official Frantz Klintsevich claimed:

It can be ISIS, or the Kurdish army which tries to hurt Erdogan.

‘But may be – and it is highly likely – that representatives of foreign NATO secret services are behind it.

‘What has happened is a true provocation, a challenge.

‘It is a challenge for Russia.’

From Benghazi to Aleppo to Kiev… to Berlin and Paris, everyone blames America.

What do we lose by sending Gulen to Turkey or Russia? I really haven’t read much about him.

“See, this is why it’s hard not to go all Alex Jones on Russia and Turkey because you know the officials would do anything to achieve their objective.”
————–

I looked up “Alex Jones” on Wikipedia and a slew of names came up, none of them particularly prominent to my mind.

Would someone be so kind as to elaborate upon the author’s reference?

“Who will guard the guards themselves?”