Number of jihadists returning to Europe continues to grow. 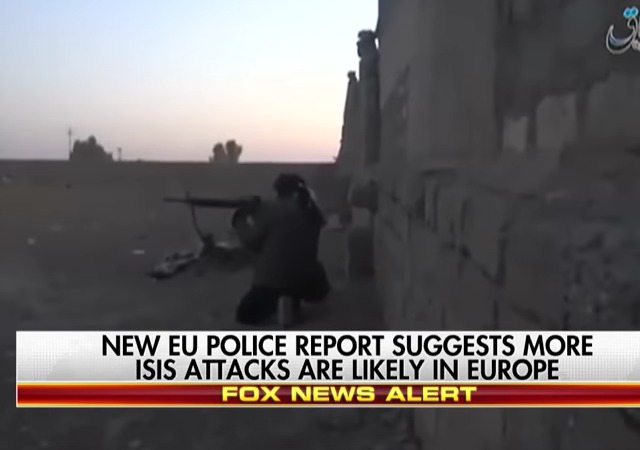 EU counter-terrorism coordinator Gilles de Kerchove will tell the EU interior ministers on Friday that experts have found 1,750 ISIS jihadists have come back to Europe to perform terrorist attacks:

Up to 35 percent have returned – some with ‘specific missions’ – and 50 percent remain in the battle theatre, which amounted to between 2,000 and 2,500 Europeans.

Belgium has already begun to worry about the amount of jihadists that return to Europe due to coalition forces driving “ISIS from territory in the terror-group’s self-declared caliphate across Syria and Iraq.” The Daily Mail continued:

The report said there were two types of ‘foreign terrorist fighters’ returning.

‘Those in the majority that will drift back, and those who will be sent back on specific missions, which are of most concern,’ the report warned.

It said even some European women and children born or raised in the so-called caliphate declared by ISIS in Iraq and Syria could pose a security threat as they may have been radicalised.
Without giving figures, it said some returnees have been convicted and serving prison sentences, while others are being monitored and some are free in their communities.

‘There is also a significant foreign terrorist fighter contingent with Daesh in Libya which might attempt to use their nationality or family connections to return to Europe,’ the report said.

The news comes just as Belgium authorities “detained eight people on Tuesday suspected of recruiting jihadists to fight in Syria and raising funds for the Islamic State group.” The officers raided nine homes, but did not find weapons or explosives.

Belgium has “the highest per capita number of fighters who have joined jihad in Syria and Iraq, a figure estimated at 465” among EU nations.

Just last week the EU warned of ISIS attackers shifting their “focus to softer, more-random European targets in an effort to intimidate the public, instead of aiming at the police or military.” The same report added that the number of jihadists slipping into EU nations will continue to rise.

The experts believe the jihadists will continue to use the same methods of attacks with “guns, bombs, knives and vehicles,” but stated that they could expand into using car bombs. The threats also contain people “from both networked groups and lone-wolf attackers,” but also ones that took awhile to plan and “those that appear spontaneous.”

Jihadists, the report said, frequently aren’t necessarily highly religious or strict in their practice of Islam. Instead, they are often people with a criminal past who feel discriminated or humiliated, and might have mental-health issues.

Islamic State militants have placed France “high on the target list,” the report said, noting not only the November 2015 Paris attacks but also lone-wolf attacks this year. The report said there were a wide range of possible reasons that France has been targeted, including its role as a symbol of Western nations, the economic isolation of Muslims in the country and its involvement with Muslim countries such as Algeria, Syria, Lebanon and Iraq.

The report also said Islamic State blames France for its historical role in the end of the Ottoman Empire.

“IS has an obsession with history and honor, and blames France in particular for the break-up of the Ottoman Empire and the abolition of the Caliphate following the First World War,” the report said.

At some point these guys are going to mass in Mexico and come across the border. They will hit some small town in California or Texas and kill everyone. And, let’s see if the DHS can respond before they go back across the border like Pancho Villa.

You might find the history of the Texas Rangers interesting.

If you look at the situations in Sweden, Belgium, France, and Germany where the locals just can’t seem to come to terms that some humans are just not like them. They are called devout muslims. They believe in different things, the most vicious is their superiority, and to think that you can give them a crash course in how to behave in the West is naive. I believe what is going to happen is that there will be a wave of a brutal slaughter of innocent people and then there will be an uprising like we haven’t seen in decades. ALL of the muslims, good and bad, will be rounded up and deported. There will be no trust of any muslim after that and can anyone blame them for that attitude? The things that the Europeans have endured from this group are unbelievable and worse is yet to come.

Once they find out that we have Naval Officers that have had training in sensitivity toward gays, lesbians and transexuals, they will run in fear and beg for peace. They will throw down their arms and hide their women and children.

Fortunately we will have Lt. Commanders, that can help them set up safe places.

Mad Dog will take care of that crap very soon. Heck the Air Force might even have to do a morning run. Just kidding, don’t want to hurt recruiting.

If you own stock in Europe … sell.

Or you can wait and hope that the Moderate Muslims we keep hearing about will suddenly manage to assert control over these animals, and …