Michael Turner calls Trump a “hater” and refused to sell gas to supporters. 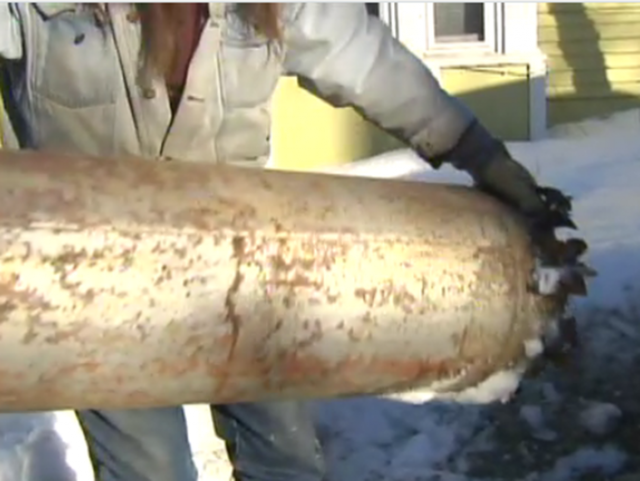 The most valuable lesson to be had in 2016 may be that tying your firm’s products to politics is a bad business model.

The latest person to learn this lesson is a Maine propane distributor who recently refused to sell gas to Trump voters.

If you call Turner LP Gas in Skowhegan, you get a message from owner Michael Turner: “If you voted for Donald Trump for president, I will no longer be delivering your gas,” it says. “Please find someone else.”

Reached on Friday night, Turner said he recorded the message on Election Day. After media learned of it earlier that day, he said he had 50 voicemails. Most of them were from angry Trump supporters, but he said one of four were supportive.

He said Trump is “despicable” and said, “I think he’s the Antichrist,” though the Skowhegan native and veteran said his family likely all voted for the president-elect because of his stances on gun rights and abortion.

To say there was blow-back would be an understatement. The phone has been ringing off the hook, and not in the good, free-market-success way, either!

Perhaps that is why Turner is re-evaluating his business model? He indicates that he is about to retire, and that he would never deny anyone freezing much-needed fuel.

He says he’s helping the last of his customers find a new propane dealer. And until they do, he’ll keep them warm.

Considering that he referred to Donald Trump as despicable and the Anti-Christ, I might suggest Turner spend some time reflecting on his use of the term “hater”.

As Hillary Clinton is discovering, a dramatic display of hubris is usually followed by a visit from Nemesis. Because Turner decided to exercise his First Amendment right to express himself, other Americans exercised their right to indulge in some due diligence.

The result? It has been determined that Turner is not licensed to sell propane gas.

Turner is not licensed to sell gas. According to the Maine Fuel Board, Turner’s propane license expired in 2012. Turner had two licenses, one for delivery and the other for dispensing, which expired in 2012 and 2014, respectively. The board became aware of the issue after the news of Turner’s message was reported by the Portland Press Herald late last week.

According to records with the Maine Fuel Board, Turner was first licensed to sell propane in 1998. Doug Dunbar, a spokesperson for the Department of Professional and Financial Regulation, said the department is aware that Turner’s license expired. It is illegal to operate without a license. He said anyone can renew a license at any time, and someone operating without a license could face disciplinary action from the department or fines from the state attorney general’s office. As part of the renewal process, an inspection of the location would be conducted to make sure it meets code requirements.

We wish Turner a Merry Christmas and a happy retirement. He should really consider a stint as MSNBC for his next career. It appears there is no permit needed to opine…yet.

karma is a bitch

What if I were homosexual, and looking for a wedding cake?

You probably ought to look for a cake somewhere other than at a propane store.

You know EXACTLY what I’m talkin’ about.

There are several Christian businesses that are now out of business for taking a stand for their beliefs.

The Christian businesses were punished by the Government for their refusal to bake a wedding cake because of their religious beliefs. Mr. Walker, may be punished for not having a license, but not for his beliefs.

Of course Clinger, refusing to serve somebody because of “race, color, religion, sex, or national origin” is against the 1964 Civil rights law. Refusing to serve them because they are an idiot, does not count. Maybe you can petition Congress to make discrimination against you illegal.

You know, if you don’t like the 1st A. you could do the honest thing and petition to get it repealed, rather than hiding behind court decisions based on specious reasoning ~

“Refusing to serve them because they are an idiot, does not count.”

“…a dramatic display of hubris is usually followed by a visit from Nemesis.”

Is this anything like a bakery refusing to sell a wedding cake to a gay couple?

It seems the liberal code of ethics is rather nuanced.

Seems “Anchovy” is supporting the opposing view. If I’m wrong, I apologize.

It is not nuanced at all retardman. the 1964 Civil rights law outlawed discrimination based on race, color, religion, sex, or national origin.

So why is a same-sex wedding (an event, not a person) protected?

It is better to be thought a fool than to open one’s mouth and remove all doubt.

Thank you for your personal testimony.

And thank you for so quickly providing an excellent example illustrating the wisdom of that maxim.

There is a difference between refusing to bake a wedding-cake for a gay couple, and refusing to sell propane gas to Trump supporters. The first has implications for the bakers’ religious beliefs; the second is just political. That is, any person or business should be free to REFUSE to engage in activities that require them to, in effect, promote or support things that are contrary to their conscience. Baking a wedding-cake for a gay couple would force a Christian business to create a cake with a MESSAGE that is against their beliefs; selling propane gas to those whose politics differ from yours does not.

A wedding-cake has an implicit message inherent in it regarding marriage — it is a message of support and blessing for the intended reunion. That is different from, say, a plain old cake, or a pie, or such things. If the gay couple requested just a plain cake from a Christian baker, there should be no conflict of conscience involved, for either party, just as in the case of selling propane to someone on the other side of the political fence. Now, if the propane-buyer insisted on the propane-seller painting something like, “Trump Rocks!”, on their propane-tank, that would be more comparable to the gay wedding-cake situation.

I find it fascinating how so much effort is being made to show how refusing to sell a wedding cake to a homosexual couple is a gross violation of someone’s rights and that the baker has no right themselves to voice their beliefs (despite freedom of religion being a protected right), but that refusing to sell propane gas to those who voted Trump is a perfectly acceptable way of expressing someone else’s views and opinions (while being a bigot or jerk is not expressly a protected right).
>
Both concepts are rooted in hate or intolerance. Both expressions of one’s views should be protected by the first amendment. To claim that my desire to be a homosexual or support homosexxualaity is a protected right but my desire to vote for Trump or whatever is not is nothing more and an exercise in splitting hairs in an effort to push my agenda while denying you yours. If one is right, then both are; if one is wrong, then both are. If you want to defend one while damning the other, then take your pretzel logic to a university where this twisted logic and ethics will make sense to those who are oh so superior to us mere mortals (sarcasm).

Regulatory agencies could have a hay-day with this village idiot due to possibly putting people in harm’s way ie: customers/homeowners, employees, and fellow motorists. Class-action his a$$ the way Alinsky would.

If I didn’t have better things to do, I would legally hound this sumb*tch to the doorsteps of Hell for fun 😉

I believe Propane is a public utility and it might be a crime to withhold it for any reason other than none payment!