“I told Vladimir Putin to cut it out” 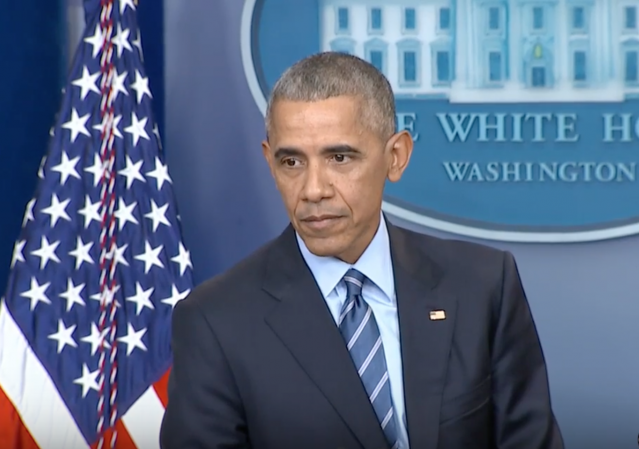 Friday, President Obama stood behind the podium for his last scheduled press conference of 2016.

Obama discussed Trump, Russia, and media treatment of Hillary in the most recent election.

Be deliberate! Says the man who refuses to call “terrorism” terrorism…

.@BarackObama: What I’ve advised to @realDonaldTrump is that on foreign policy you want to make sure you’re doing it in a deliberate way. pic.twitter.com/Cng73waNtJ

He’s not wrong, but why, I wonder, are we a nation so divided?

#Obama: Our vulnerability to Russia/other foreign power is directly related to how divided, partisan, dysfunctional our political process is pic.twitter.com/vHlO8tAYcW

Who are these people and what’s wrong with them? I’ve never met a Putin-loving Republican in all my political work.

.@BarackObama: Over a third of GOP voters approve of Putin… the former head of the KGB… Ronald Reagan would roll over in his grave. pic.twitter.com/9eEwSBnJB9

Was this before or after he counted to 3?

President Obama: I told Vladimir Putin to "cut it out" on hacking https://t.co/f1mnFZcDzX pic.twitter.com/4bIr8TCUZB

Because it’s Christmas, I’m going to give him the benefit of the doubt that when he described Russia as “smaller” he wasn’t actually talking about comparative size:

Obama: Russia is a "smaller and "weaker" country. "Their economy doesn't produce anything that anybody wants to buy" https://t.co/rGuadW0PGL

If by not being treated fairly he means “was given a pass for criminal activity and strong-arming a party primary,” then ok. This would be an interesting discussion if it weren’t coming from the man who told Republicans to get to the back of the bus.

“Is the thing to say on this bright, Hawaiian Christmas Day”

Obama leaves his final press conference of 2016 before heading to Hawaii for vacation: "Mele Kalikimaka" ???? https://t.co/HIBhYfo45G

“When you told Putin to ‘cut it out’, how long did it take for him to stop laughing?”

And fumigate on the way out.

Ralph Peters was so right: https://www.youtube.com/watch?v=mfzSlldIUHQ.

May I never have to hear another word from that pie hole.

I didn’t think it was possible, but Obama became a smaller man in office.

As to why that might be, perhaps Karl Rove hit on something when he observed:
“In his first 100 days, Mr. Obama has put the fate of his presidency in the hands of House Speaker Nancy Pelosi and Senate Majority Leader Harry Reid. He may come to regret that decision.”

One wonders, despite Obama’s bravado, whether this might not be so.

True to a good degree. But he also put his fate of his presidency in the hands of Valerie Jarrett.

He looks shrunken and bitter.

Mooch has the same attitude, as if they deserve homage of some sort, instead of being pelted with road apples.

May he live long enough to see full repeal and repudiation of everything he’s done.

And expose the complete fraud that he is.

Show me the evidence.

Just STFU and go away, Zero. You are a petty, narcissistic, small-minded lout. You’ve ensured your place in American History as the worst president ever, and for that Jimmy Carter owes you a boatload of gratitude ~

So this is what he meant by being ‘more flexible’ with Russia on that open mike comment. He managed to get his head stuck right up inside his…

@BarackObama: Over a third of GOP voters approve of Putin… the former head of the KGB… Ronald Reagan would roll over in his grave. pic.twitter.com/9eEwSBnJB9

Actually Ronald Reagan rolled over in his grave when he found out you were elected dork. He knew you were a conniving, slimy, morally bankrupt SOB. And he said those were you better points.
Hurry up January 20th.

How many democrats approve of Soros, a former Nazi?

Didn’t mean to down rate you, was trying to hit reply. I would love to see the actual question in context of that approve of Putin bit. And also wonder how many would willingly just say that to a pollster to yank his chain. I know I might think about it.

No problem rdm, can’t say I worry about likes or dislikes anyway.
Any responses to what I write tells me the same thing.

“That oughta do it. Thanks very much, Ray.”

I hope he doesn’t pull out all the stops and put #BadPutin on Vlad.

Disenfranchised insiders have exposed the ugly underbelly of the DNC.

The slide down has started:

Barry and his lackeys set race relations and affirmative action back at least 50 years. It will take that long for our allies to again trust us. Don’t go away mad, just go away!

Obama: Russia is a “smaller and “weaker” country. “Their economy doesn’t produce anything that anybody wants to buy”
* Sounds just like Washington DC

Obama: I don’t think Hillary Clinton “was treated fairly during the election”
* Putan replied: Yes, she should have been shot for treason.

Obama’s been compared to Carter, but as a Heritage writer said a couple of years ago that’s an insult to Carter. Carter was much more pro-Democracy and hated dealing with anti-communist dictators, but finally started to see it as a necessary evil.

By the end of Carter’s Presidency he was finally beginning to see Russia for what it was and was at the point where he told them point blank if they got any closer to our resources in Gulf, they were risking war. To make that clear he sent more troops and set up what would later become CENTCOM, the force that protects US assets and allies in the mideast (Saudi Arabia, Kuwait, Oman, Qatar, UAE, etc).

OTOH Obama, unlike Carter, has learned nothing and forgotten nothing. He’s the kid who gets sand kicked in his face and then doesn’t send away for the Charles Atlas training course, but just goes back to the beach the next day for more sand.

“I told Vladimir Putin to cut it out”

Since he was wearing a French maid’s costume, had been making his jock boyfriends from Tehran to Moscow sammiches whenever and as soon as they demanded, and had fresh rugburns on his knees from the last time they drove him around the living room, somehow I am convinced this “cut it out” went over about as well as the last “cut it out” in this prison bitch relationship Obama has crafted with the world’s dictators.