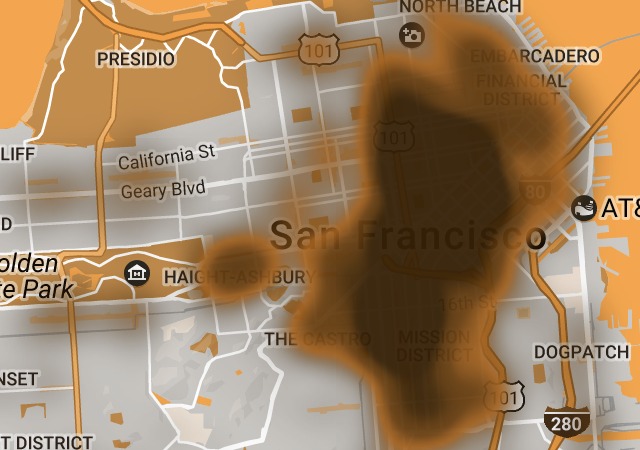 I love San Francisco, but now I’m glad I haven’t visited it in years. Turns out someone had to develop an online map to help people avoid human feces on the street. How disgusting:

After 20 years of envelope-pushing changes to grow government and ease law enforcement, the once-shining City by the Bay has turned into a place where:

On the hazardous waste side, the city is reporting an increase of syringes and feces sightings at 41 and 39 percent, respectively, over 2015 levels​. That’s just an average. The hardest-hit area reported a 77 percent rise in discarded syringes and a 140 percent rise in feces. The city spends about $2 million a year on urine and feces cleanup.

Just another liberal center of excellence.

now that sounds like something that ole nanc and her daughter(?)can work with

Sounds like they need a pooper scooper law…for humans.

The CHICKENS have come home to ROOST! or shit, as the case may be.

Couldn’t have happened to a more deserving group of leftists.

The city refuses to issue permits build multi unit housing, so the poor/low income/homeless have no place to live (and housing prices for everybody else are sky high).

Of course people are going to shit on the streets, if they don’t have places to live to shit in.

People that can’t afford to live in San Francisco should haul their butts to Fresno. Lots of cheap rent there. Why do people think they have a right to live in places they can’t afford? I would love to live in Paris… heck, even Carmel would be nice…but I can’t afford it!

When I was flying as an airline pilot years ago, San Francisco was my favorite city of all US and foreign cities. I took my children there about 20 years ago to show them my gem of a city only to find that all of my favorite places were filled with sleeping homeless bums that had urinated and defecated everywhere. The smell at the once pleasant little parks was nauseating. Panhandlers were everywhere and made walking a defensive battle. If this is the result of liberal doctrines, sanctuary cities, then we can only imagine what our nation would look like under years of their control. I used to walk for miles and never see the same thing twice. Now everything is the same and it is a sewer.

It appears leaving one’s heart in San Francisco is no longer sufficient.

S.F. being what it is today, I am quite surprised that the entire map isn’t colored brown all the time.

And yet, liberals never, ever learn from their failed policies. Einstein’s definition of insanity was right.

I confidently expect to see outbreaks of cholera and typhoid. Mind you I don’t really care any more than I would for any other foreign, third world country. But I do expect it. It is the result of what they demand, so let them have it good and hard.

Both Paris & Beverly Hills are full of dog poop too. But what San Francisco has, or at least had last time I was there several years ago, was fat naked street protestors. A map to avoid those would have been helpful.