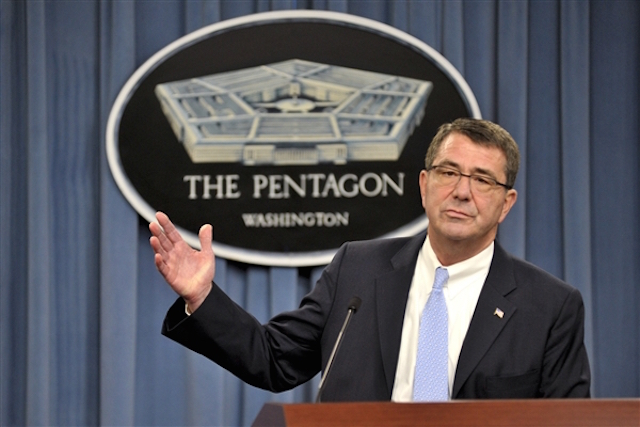 The Washington Post has revealed that the Pentagon hid $125 billion in wasteful spending because officials feared Congress would use the evidence “to slash the defense budget.”

The study started with good intentions. Deputy Defense Secretary Robert O. Work wanted the Defense Business Board to operate the study in order to become “more efficient and reinvest any savings in combat power.” But Work immediately changed his mind when the board presented its findings.

The report, issued in January 2015, identified “a clear path” for the Defense Department to save $125 billion over five years. The plan would not have required layoffs of civil servants or reductions in military personnel. Instead, it would have streamlined the bureaucracy through attrition and early retirements, curtailed high-priced contractors and made better use of information technology.

The study was produced last year by the Defense Business Board, a federal advisory panel of corporate executives, and consultants from McKinsey and Company. Based on reams of personnel and cost data, their report revealed for the first time that the Pentagon was spending almost a quarter of its $580 billion budget on overhead and core business operations such as accounting, human resources, logistics and property management.

The Pentagon paid 1,014,000 contractors, civilians, and uniformed personnel for desk jobs at the Pentagon to support only 1.3 million troops on active duty, which is “the fewest since 1940.”

The Defense Business Board wanted to help the Pentagon save $125 billion to help troops and weapons, especially “to rebuild the nation’s aging nuclear arsenal, or the operating expenses for 50 Army brigades.”

Despite the good that could come out of the study, those in charge buried it:

But some Pentagon leaders said they fretted that by spotlighting so much waste, the study would undermine their repeated public assertions that years of budget austerity had left the armed forces starved of funds. Instead of providing more money, they said, they worried Congress and the White House might decide to cut deeper.

So the plan was killed. The Pentagon imposed secrecy restrictions on the data making up the study, which ensured no one could replicate the findings. A 77-page summary report that had been made public was removed from a Pentagon website.

“They’re all complaining that they don’t have any money. We proposed a way to save a ton of money,” said Robert “Bobby” L. Stein, a private-equity investor from Jacksonville, Fla., who served as chairman of the Defense Business Board.

Stein, a campaign bundler for President Obama, said the study’s data were “indisputable” and that it was “a travesty” for the Pentagon to suppress the results.

But the study does not surprise me at all. I reported in August that the Pentagon had not audited $6.5 trillion it spent on wars and equipment due to horrible bookkeeping practices. The Defense Finance and Accounting Service “did not document or support why the Defense Departmental Reporting system-Budgetary (DDRS-B), a budgetary reporting system, removed at least 16,513 of 1.3 million records during third quarter FY 2015.”

The same people who spent the money would be yelling that it should have gone to the poor if anyone on the right did such a thing.

Ike warned us. The Defense Industry feels like they deserve Corporate Welfare.

“The poor” increasingly being the former middle class.

It threatened the careers of bureaucrats and the kickbacks they give to their buddies in favored industries, of course they had to hide it! Like Pablo Panadero already said, drain the swamp. These bureaucrats protecting their careers/fiefdoms is really at the heart of why our government wastes so much money. Correct that and a lot of our budget woes would start to really improve!

There should be term limits for government employees.

Too many solid gold weapon systems and not enough actual deliveries.
We need planes and tanks, not cost overruns and promises.

Trump’s shot across the bow at Boeing is an opening gambit in this area.

We had a Carter in the pentagon! Need I say more?

Inattentive supervision leads to cozy relationships and unusual costs. It is a perennial problem. That’s why we need oversight.

Those who are constitutionally charged with the ‘power of the purse’, Congress, has failed to establish the fiscal rigor to monitor, on an ongoing basis, waste. The more complex the system, is there any more complex than the Pentagon, the greater the need for rigorous and self correcting fiscal systems. Hopefully the new admin will be successful in fighting fiscal waste. I’m not holding my breath, as the cancer of waste is stage four.

In other news, Monster.com and Linked in are chalked full of newly updated resumes with tons of federal government experience.

Oh, it would be so nice to say “the days of the loose purse strings are over,” but I’m afraid they’re just beginning. Trump’s got a lot of cleanup to do. Best of luck to him.

In the private sector such a cover-up would likely be considered fraud and would lead to the arrest and criminal prosecution of the offenders.

Government ‘waste’ money doesn’t just blow into a ditch somewhere, gone forever, and that is why government waste is a problem wherever there is government for as long as there has been government. We need someone willing and able to follow the trail of ‘wasted’ money to see where most of it is actually going and start dishing out indictments. It would not surprise me that half or more is simply stolen.

I.e., that the term ‘government waste’ is a euphemism used to imply the money’s gone, don’t bother looking for it, precisely what thieves would hope for.

It was all on that malignant clown’s watch.