Pearl Harbor Attack: “A Date Which Will Live in Infamy”

Pearl Harbor Attack: “A Date Which Will Live in Infamy”

The attack propelled American into WWII. 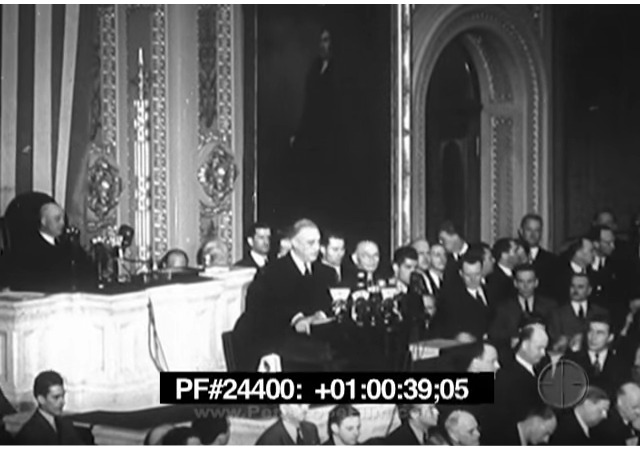 “Yesterday, December 7, 1941 — a date which will live in infamy — the United States of America was suddenly and deliberately attacked by naval and air forces of the Empire of Japan.”

The speech became known as the “Day of Infamy” speech, but Roosevelt’s show that he almost did not use infamy. Instead, he originally wrote world history, but scratched it out and replaced it with infamy.

The true story of the "Day of Infamy" speech–20th century's greatest speech https://t.co/WHgNwHlAua via @FDRLibrary pic.twitter.com/dpgBKxOomK

It also turns out that officials wanted him to deliver a longer speech:

Paul Sparrow, director of the FDR Library, said: “Some of his advisors, the Secretary of State, Secretary of War, wanted him to deliver a much longer speech.”

The State Department drafted a 17-page speech rehashing the history of U.S.-Japanese relations, but Roosevelt set it aside and went with his gut.

“He knew that the American public wanted to hear that we had been wronged and that we will find a way to victory,” Sparrow said.

“No matter how long it may take us to overcome this premeditated invasion, the American people in their righteous might will win through to absolute victory.”

“If you think about that word choice change . . . it’s not just a rhetorical flourish,” White House speechwriter Sarada Peri told The Washington Post’s Lillian Cunningham in her Presidential podcast. “It actually, it gives greater meaning. He is making a judgment call about what this moment is. It is an act that is treacherous and requires some kind of response, and it’s part of what speech writing is about, which is clarifying to the point of finding the right word.”

His personal secretary Grace Tully described the moment in her memoir:

I sat down without a word; it was no time for words other than those to become part of the war effort.

Once more he inhaled deeply, then he began in the same calm tone in which he dictated his mail. Only his diction was a little different as he spoke each word incisively and slowly, carefully specifying each punctuation mark and paragraph . ..

The entire message ran under 500 words, a coldblooded indictment of Japanese treachery and aggression, delivered to me without hesitation, interruption or second thoughts.

Congress voted for war only an hour after FDR delivered his speech.

And now our veterans are told to suck it up. By a nancy boy who would shriek and hide under his bed if someone pointed a finger at him and went ‘bang’.

Yeah, but it still should have been “that” will live in infamy.

If you listen close enough, you can hear the Left cheering for Imperial Japan.

These days, what passes for a declaration of war reads like a software EULA. I guess they just didn’t know how to fight, back then.

It took longer for Buraq Hussein Obama to decide on the Afghan Surge than it took FDR and the United States to claw its way back out of the mud at Pearl Harbor, December 7, 1941, fight the Battle of the Coral Sea to a draw in May, 1942, defeat the Japanese Fleet at Midway, early June, 1942, and invade the island of Guadalcanal, August 5, 1942.
Of course this was shortly after the time when “Iron men went top sea in wooden ships” America is so much more refined today.
Pass the K-Y Jelly.

I joined the USN based on its amazing performance in WW2. I remember watching the movie “In Harm’s Way” and saying to myself, “I want to be part of that.”

I made a point to become a Pacific Fleet Sailor and I love Pearl Harbor. I often went to Ford Island and would stand on the shore looking at the Arizona Memorial. I was always moved by that sight.

Having said that, I am so glad that I did my 25 years and got out when I did. I wouldn’t be able to take the social experiment that my Navy has become.

To my mind, the only mission of the Navy should be to put hot lead on hostile targets. All that other crap is BS.