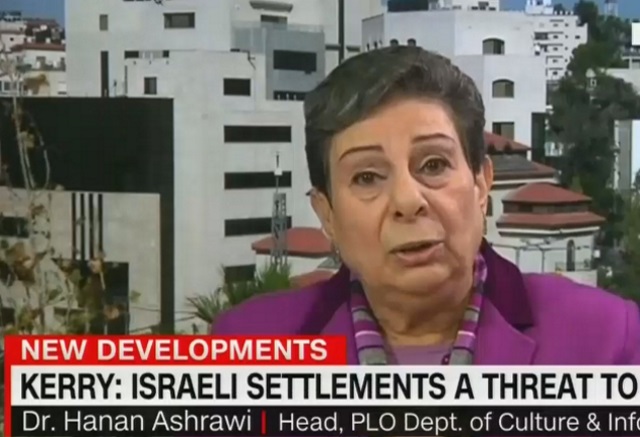 Hanan Ashwari has for decades been the most recognizable face of the Palestinian government in the American media. As was clear this morning, she is also the face of Palestinian rejectionism of the very basis of the existence of the State of Israel.

Ashwari appeared on CNN after David Keyes, Netanyahu’s spokesman, said that the real barrier to peace is Palestinian rejection of Israel as a Jewish state. Ashwari expressed that rejection in clear terms: “we cannot a accept religion for any state.” Emphasizing her point, she twice mockingly described Israel as wanting Palestinians “to become Zionists suddenly.”

Note: Ashwari tries to distract by claiming the Palestinians reject a religion for any state, be it Jewish, Muslim or Christian. But the Palestinians of course deal without qualms with many explicitly Muslim states, such as Saudi Arabia, and with Christian ones such as the UK, where the head of state, the Queen, is also the head of the Church of England.

POPPY HARLOW: David Keyes from the Israeli government, spokesperson for Benjamin Netanyahu, just came on the program earlier and spoke with Don [Lemon] about — about where we go, frankly from here, really pointing his finger at you and the Palestinians. I want your reaction to this. Listen.

DAVID KEYES: Every time they were offered, they said no. And the reason is simple, because the conflict is not about the creation of a Palestinian state, it’s about the existence of a Jewish state. And I can quote Palestinian ministers saying precisely that, as well, and I can, you know, tick down the list from Nabil Schaath who said we will never accept two states for two peoples, to President Abbas who said we will never accept a Jewish state, to Farouk Kaddoumi, to Abbas Zaki, to, on and on down the list.

HARLOW: Your response to that. What is the Palestinian commitment to a two-state solution at this point in time?

HANAN ASHWARI: I think instead of dealing with circumlocution and attempts at deception let’s look at the facts. We have recognized the State of Israel in 1993 —

ASHWARI: We’ve already answered that. Now, that’s a new precondition. Before the condition was that the Palestinians have to recognize Israel and have to recognize Israel’s right to exist and so on. Now when they destroy the peace process and all the talks they introduce another precondition. Is that we have all to become Zionists suddenly and we have to accept the idea of the Jewish state when we are desperately struggling to have, as I said the other day, an inclusive, democratic, tolerant Palestinian state.

We cannot accept a religion for any state. We cannot talk about Jewish states or Islamic states or Christian states. Otherwise, you will end up having to deal with the Islamic state. We personally believe that there is no license to discriminate against any group, any ethnicity, any religion or to give them any additional value because of their ethnicity and religion. So if you want equality, and if you want a state to be an equal among other states, then you recognize the democratic state, and that should be enough. We recognize —

“We personally believe that there is no license to discriminate against any group, any ethnicity, any religion or to give them any additional value because of their ethnicity and religion.”

So then why do the settlements need to leave? Can’t we all live together?

This is just the coordinated re-writing of history initiated by the Obamic UN resolution.

Israel was always intended to be a Jewish state. From its inception.

John Kerry: “If the choice is one state, Israel can either be Jewish or democratic. It cannot be both.”

Hanan Ashwari: “We cannot accept a religion for any state. We cannot talk about Jewish states or Islamic states or Christian states.”

…Nope! Not one iota of coordination…not…one…iota.

The Palestinians also embrace Hamas, which was founded for the purpose of imposing a Muslim state and also for murdering every living Jew.

She doesn’t get to decide what Israel is.

And neither does Obama and Kerry.

Everybody is a comedian now that have seen how well Obama’s comedy has been reviewed by the msm. Culture?

Wow! They must have pulled Hanan Ashwari out of a bottle of formaldahyde.

Recall that twenty or more years ago she was the Go-To person the TV news would trot out whenever we were due for some pro-Pali propaganda. For a year or so, she seemed to be on the TV news almost constantly.

I assumed at the time that somebody’d finally realized that, as a woman, nothing she says is of any consequence whatever in the Arab world. In other words, she’s just noise … which would be OK as long as we dumb Americans didn’t realize it, but once we did, her “sell by” date had arrived.

So … why are they exhuming her now?

“Then … she disappeared.” She was representing Palestinians before the Oslo Accords and before Arafat and the PLO returned. As befits such a Democratic organization such as the PLO, when they returned and took over, it was join them or die. That may have been when she dissappeard for a while. She has been in the limelight for a good while now so she must have joined the PLO.

Not quite. She was always acting on Arafat’s orders, and was absolutely open about that. It was the Israeli government of the time that pretended there was some distinction between her and the PLO, so that it could talk to her while ignoring the fact that she was in constant contact with Arafat who dictated exactly what she should say.

I hope Trump goes sits down with Netanyahu to ask him, “what do you want us to do? Just name it, my friend,” knowing a man like Bibi will not take advantage nor ask too much. And I hope Trump does it.

she’s gott asmoke 4 packs of cigs a day. How is she (and Saeb Erekat) still alive? Evil won’t die?

The palestinian leadership have been the enemy of palestinian people since their unsuccessful overthrow of the Jordanian government sabotaged the two state solution.

THIS is the blocker to peace. The Palestinians inability to accept the right of the Jewish state of Israel to exist in peace.

The Palestinian mindset will not allow them to accept Israels right to exist in peace because once they do that thats decades and decades of ideological brainwashing down the drain. Oh, that and probably the realisation their own brain washed people will lynch anyone who dares settles for peace with Jews.

That lady is in desperate need of a niqab. I expect Bibi and Trump have already talked. Trump isn’t a communist organizer from Chicago. He’s an international businessman known to the big players.

we cannot a accept religion for any state.

Religion has nothing to do with it. Israel is not a religious state. It’s the state of the Jewish nation, exactly as she wants her proposed state to be the state of the alleged and artificially invented “Palestinian” nation.

All the Arab States identity as Muslim States. It’s the same old nonsense, where the Muslim states have different rules. Israel was stupid to allow Jordan a say in the control of the holy areas in Jerusalem. After Jordan ethnically cleansed Jews from West Jerusalem, destroying anything and everything relating to Jews defiling holy Jewish sites, Israel should have demanded reparations.