Over 50 People Shot in Chicago Over Christmas Weekend

Over 50 People Shot in Chicago Over Christmas Weekend 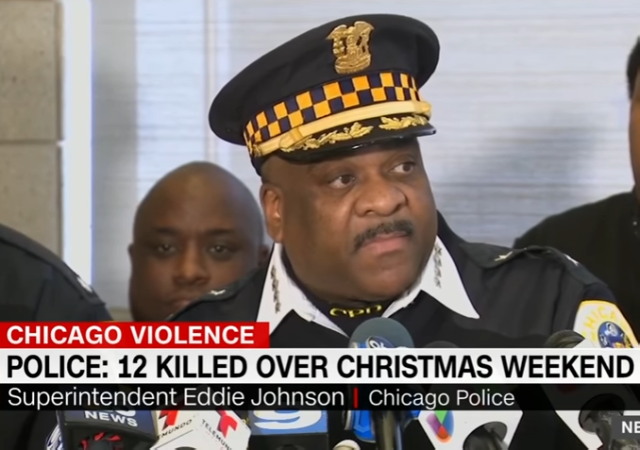 Apparently, the criminal element in Chicago doesn’t take time off at Christmas. An alarming number of shootings and connected fatalities took place in the city this weekend.

Bloody Year in Chicago Continues with 12 Killings Over Christmas Weekend

Two men gunned down on a porch in Chicago on Christmas Day were among 12 people slain in the city, where an epidemic of killings continued during the holiday weekend.

The killings were among 27 shooting incidents occurred from Friday evening to Sunday evening, according to Chicago police. Police said 90 percent of the victims had gang affiliations.

“We had a reprehensible amount of shootings and murders” this weekend Chicago Police Superintendent Eddie Johnson said.

That number of killings is double the amount from last Christmas weekend when six people were killed, according to The Chicago Tribune. And last year’s tally ran from Thursday evening to Sunday evening, covering one more day than this year.

The bloody Christmas weekend comes toward the end of a record year of violence in the nation’s third-largest city. More than 750 people have been killed in Chicago in 2016, marking the first time in nearly two decades that the number slain has exceeded 700, according to the Tribune.

According to this report from CNN, some officials are calling for more gun control, despite the fact that Chicago already has incredibly strict gun laws.

Here’s the Chicago Tribune report referenced above which seems to be the most up to date:

Eleven of the 57 people shot between about 4:50 p.m. Friday and about the same time Monday died from their wounds. More than a dozen others were listed in serious or critical condition.

Much of the violence happened in areas “with historical gang conflicts on the south and west side of Chicago,” said Anthony Guglielmi, a spokesman for the Chicago Police Department. He also referenced the department’s “strategic subject list,” which is generated daily from a computerized algorithm and assigns a score from 1 to 500 based on such factors as a person’s arrests and the activities of his associates. Those people with a score in the upper 200s or higher are considered in danger of being shot or of shooting someone else.

Someone has actually created a website to track these shootings.

HeyJackass is a fantastic web site about a truly depressing subject matter.

Is there a more incompetent mayor than Emmanuel? The sad thing is the citizens of Chicago would reelect him in a minute. Leftism is truly a disease of the mind. Their leaders get incredibly rich and the citizens get shot.

I’M SORRY, but it’s just really hard to care about the thugs of Chicago any longer.

Perhaps the answer is to pass out free guns and ammo on the street corners for everyone who would like one. Let them kill each other off so that the peaceful folks can get on with their lives. Who knows, perhaps the BLM gangsters will catch a few slugs during this course of events; no great loss.

The Founding Fathers believed that blacks couldn’t live under the American legal system. Jefferson et al thought that blacks weren’t capable of living up to the responsibilities that come with the laws of a truly free country. We see this when it comes to gun ownership. I don’t have the stats to back this up, because it’s not politically correct to study this, but my guess is that an increase in white gun ownership reduces crime, while an increase in black gun ownership INCREASES crime.

You are assuming (remember that word from Bad News Bears) that black gun owners are criminals and white guns owners are not. Such generalities are stupid. How do you see through those tiny hole in the pillow case?

The article states that 90% of the victims were gang related. I would also guess that 95% of the shootings were drug related. Guns are not the problem – drugs are.

More specifically — “organized” crime is the issue. Illegal drugs are a major industry whose participants at all levels cannot use the courts and the police to enforce their contracts and deals. So disputes are resolved with violence.

But agreed that focusing on guns will be of no help at all — at best.

Aleister, I don’t think the Mayor’s office would like your pessimistic headline.

I think they’d prefer the more optimistic “Only 50 People Shot in Chicago Over Christmas Weekend”.

If it wasn’t for the fact that someone is losing their life , this would be funny. barry and his gun control mob just don’t seem to get it, gun free zones attract criminals, DUH !!!!!
Put the SOBs in jail and throw away the key.

as a side, wonder how many of the felons barry has pardoned will be back in jail in a years time?

Compare what the Segregationists predicted half a century ago with what we see today. Call them racist, call them evil, just don’t call them incorrect.

REALLY? Don’t call them incorrect? Honestly, I don’t know how much exposure you have to gang activity, but a person doesn’t have to be black to have a ‘jail-house’ attitude… strutting around with their pants hanging down, calling women “bitches” and working with a gang.

The Mexican mafia doesn’t have any blacks attending, but they’re very deadly. The Colombians, the Middle East immigrants, the Russians…crap, they all HATE the blacks – but don’t have a problem sticking some stupid white boy or jacking his car. Skin color is a ‘faux currency’ while the real currency is violence by a dirtbag.

These are dirtbag killing each other. Blacks are only a small portion of what’s happening. Gangs, lawyers and courts – the cops have to work through these obstacles to get some little conviction before the thug can return to the streets.

Give them each a gun and tell them to kill each other. Get it over with.

And these are just the ones that were reported.

Looks like we need a new underground railroad—leading OUT of Chicago.

It wouldn’t help, Orwellington. You can take a person out of the ghetto but you can’t take the ghetto attitude out of the person. It is a permanent stain on their soul.

There is NO way a city with such comprehensively restrictive gun laws could have ANY gun-related crime, let alone the silly numbers floated in fake news articles like this one.

If you were of a criminal mind, would you head for a gun-free zone or an NRA meeting?

The NRA meeting, because they’re all fellow criminals! No wait… the Gun Free Zone, because if I’ve got the only gun, my robbery ought to go well!

Now I’m not sure. Is this a social visit or a business visit? Makes a big difference.

Mayor Dead Fish & Supt. Johnson are on board with stricter/longer sentences for illegal gun offenses which is a break from previous views that it only targets blacks with guns breaking the law. Chicago black lawmakers are taking heat presently because of shorter sentences that they felt were “fairer”.
I’m on the southwest side today in a gun-free zone. God forbid anything unpleasant occurring or if it does I hope I’m in my vehicle 😉

It’s a damned shame people have to get shot in Chicago because Houston doesn’t have the gun laws Mayor Bloomberg of New York wants it to have.

“LAWBREAKERS, LAWMAKERS: In some parts of Chicago, violent street gangs and pols quietly trade money and favors for mutual gain. The thugs flourish, the elected officials thrive—and you lose. A special report.”

Rahm Emanuel wants to you to know the only thing wrong with Chicago are gun stores in Arizona.