Now for something patriotic from California

Now for something patriotic from California

When a San Fransisco home team failed to deliver a National Anthem for a high school football game, the visiting team took over. 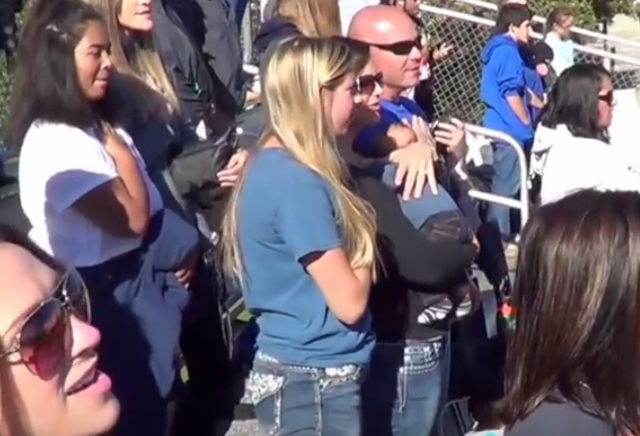 Legal Insurrection fans probably despair of California, given the inanity of our politicians and the desire of some of our citizens to leave the Union.

However, I would like to share a touching story of patriotism that may redeem our state, slightly.

Videographer Tom Baldwin reports that Amador Varsity Football, from a small California town outside Sacramento called Sutter Creek, had a game against Lincoln High in San Francisco. However, the friends and family of the visiting team noticed something was amiss prior to kickoff.

As the game was about to start, the crowd realized their [sic] was no National anthem being played, which is traditionally the home team’s responsibility. Also, there was no American flag flown at the stadium, just an empty flagpole. The small town community, who drove over 130 miles to watch their team play, took matters into their own hands and sang the anthem loud and proud. it was magical!

Amador won the contest 45-20 and was at that point only one game away from playing for the state championship. And while the team did make the final game, it did not win it.

Baldwin followed up with another message later, concerning the lack of an anthem.

Recently I was told that the Lincoln High band was late and CIF would not wait for them to play the national anthem. Not sure why the flag was missing but I wanted to clarify this was NOT a political statement by the San Francisco School.

Given the fact the San Fransisco Board of Supervisors issued a special proclamation after the election of Donald Trump specifically stating their intention to keep its status as a sanctuary city, essentially challenging one of the President-Elects major policy points, and since no American flag was evident, it is easy to understand why some would think this was a political statement.

Perhaps someone from Lincoln High could find a flag and figure out how to better coordinate the band next time?

We are proud of our Buffs. These fans’ attitude is what gets them called “deplorables” in some circles. So be it.

Haven’t lived there for many years, but I would guess that there’s still a large demographic difference between Amador and SF.

So as I understand it, the Amador team was the visitors, playing in SF against an SF home team and the SF stands are empty?

It was as much of an unintentional mistake as the Chinese unintentionally forgetting to send out stairs to Air Force One and organising a red carpet welcome to the G20 summit at Hangzhou, Southern China in September this year.

Thank you for this great story, and to the Patriots who sang our Anthem and wouldn’t let the loser SF team denigrate our great country.
Submitting this to Breitbart & Drudge!
MAGA!

Please do not include the SF team in the criticism, it was the school staff that were responsible for the flag and the song. Any student that had the temerity to speak up would be in trouble.

So true, correction noted, ….but what about the parents??? THEY should have complained and righted the sad situation on their side.