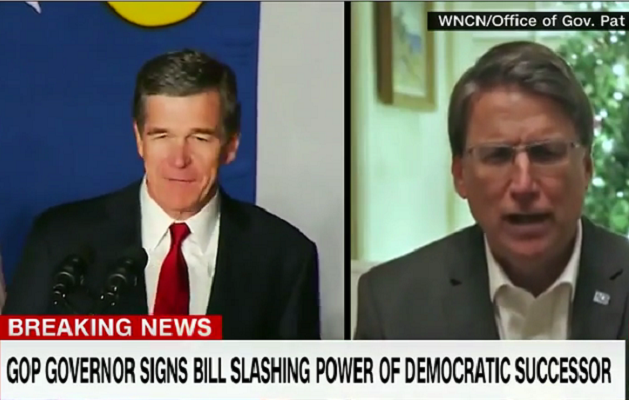 Having lost his bid for reelection, North Carolina’s governor Republican Pat McCrory has signed into law a bill that will, among other things, limit his Democrat successor’s power to appoint Democrats to the State Board of Elections and that will require the political party of judges to be printed on election ballots.

On his way out the statehouse door, North Carolina Republican Gov. Pat McCrory signed into law the first of what could be several bills that would strip the executive powers of his Democratic successor, Roy Cooper. Critics say it’s an extraordinary move that flies in the face of voters.

The law would merge the State Board of Elections and State Ethics Commission into a bipartisan board divided equally between Democrats and Republicans. Under previous administrations, the governor would have the leeway to put a majority of one political party onto the panel.

The North Carolina General Assembly, which has been in special session since Wednesday, passed several other bills that would strip Cooper of some of his powers as governor.

It is unclear whether McCrory will sign into law any of those additional restrictions. One of the more controversial items would require the governor to put top administer nominees before the state Senate for approval and would prevent Cooper from appointing members of the UNC system schools boards of trustees.

As we have reported, the change could have ripple effects, since the state body appoints members to county election boards across the state.

. . . . The new law also increases the power of the state’s appellate court and requires the party affiliations of judicial candidates to be printed on ballots.

On Friday, the Legislature also passed a second bill that would further curb the powers of the incoming administration. That bill, if McCrory signs it, would require Cooper’s Cabinet secretaries to receive Senate confirmation, would significantly reduce the number of administrative positions in the executive branch, would strip the governor of his right to appoint trustees to the University of North Carolina and would take away some of the governor’s power to oversee schools in the state.

Republicans hold large majorities in both chambers of the state Legislature and will continue to do so when the new session begins in January.

Governor McCrory asserted that the new law will ensure fair elections; however, the incoming governor-elect is threatening to sue.

Gov. McCrory issued a brief statement Friday night thanking the legislature for passing the bill on merging the election and ethics boards.

“This legislation lays important groundwork to ensure a fair and ethical election process in North Carolina,” the statement read. He didn’t mention other legislation.

Mr. Cooper, the Democratic state attorney general who narrowly defeated Mr. McCrory in last month’s election, has threatened to sue. “If I believe that laws passed by the Legislature hurt working families and are unconstitutional, they will see me in court,” he said in a press conference Thursday. He said most people see the GOP-led moves “as a partisan power grab, but it is really more ominous.”

Typical liberal response; “Damn them, they did all of this legislationg legally, our only chance is to get a Judge to legislate from the bench!

“If I believe that laws passed by the Legislature hurt working families and are unconstitutional, they will see me in court”

Sounds like bluster. What he thinks a legislative act does to “working families” carries no great weight. Now, if there’s a reason to think that the Legislature is doing something illegal, he’d have a legit complaint; and it would be helpful to cite which part of the state constitution says the legislature can’t do what it just did. But he didn’t do that. So I conclude he’s just making noise.

I don’t think ‘Ol Roy even knows where “Court” is judging from the number of times Attorney General Roy Cooper failed or refused to represent North Carolina citizen’s in court.

I live in NC and would be upset if Cooper and the Dems had not stolen the election by keeping polls open late in the Triangle.

I still haven’t figured out why McCrory lost. “They” say it was either HB2 or the I-77 tollway, but neither of those seem to compute. IMHO McCrory did a good job, but was kind of wimpy in defending himself like Bush was. Weak Horse Syndrome?

McCrory was not a good candidate, didn’t campaign enough, IMO.

That said, it was the I77 “toll lane” corridor that did him in. He was down 30K votes compared to trump/burr from what I read. I think I linked that number earlier, but I’m too lazy to go back and look for it.

NPR was all in an uproar about it this morning. “Why is this not unconstitutional?” Well, because the NC constitution allows it, so what’s your problem with it? Yes, it is a naked partisan power grab. No, they would not be doing this if McCrory had won. I repeat, what’s your problem with it? This is how politics is done. Did you have a problem when Reid pulled the nuclear option to change the senate rules to (temporarily) favor his party?

It’s the same as the uproar in 2003 about the Republican gerrymander in Texas, after over a century of Democrat gerrymandering in that state. Suddenly the Democrats discovered principles. Scr*w that.

There’s one thing I don’t understand. The NC constitution (III § 5(8)) explicitly requires the governor’s appointments to be confirmed by a majority of the senate. How was this requirement ignored before, and why was legislation necessary to restore it? Of course the senate, faced with a governor it trusted, could have passed a resolution consenting in advance to all his appointments, but in that case surely it could withdraw that consent by a simple resolution at any time, and it wouldn’t need a special session, or the concurrence of the lower house and the governor. There must be something I’m missing.

Good point, Milhouse. That deals with the governor’s “officers,” so perhaps, school board trustees are not considered “officers” under current law?

I know you’ll not be surprised to find the d’s have been known to use their power just a few times in the past.
http://cprnc.org/remember-when/

For all political news in NC, Drudge Report style:
http://carolinaplotthound.com/

When the Democrats scream in anguish about this being a “naked power grab!!”, I just remind them that they didn’t need to grab any power due to the last 100 years being a One Party (Democrat) ruled state. When the worm began to turn with the 1972 election of Jim Holshouser, the first Republican Governor since Daniel Russell in 1897. Prior to the inauguration, the Dems got down to business in the legislature and did their best to emasculate him.