True, Joe, We Can’t Ban Trucks. But We Can Ban the People Who Drive Them

True, Joe, We Can’t Ban Trucks. But We Can Ban the People Who Drive Them

In Berlin, truck driver reportedly was Pakistani ‘refugee.’ In Nice, driver was a Tunisian living in France. 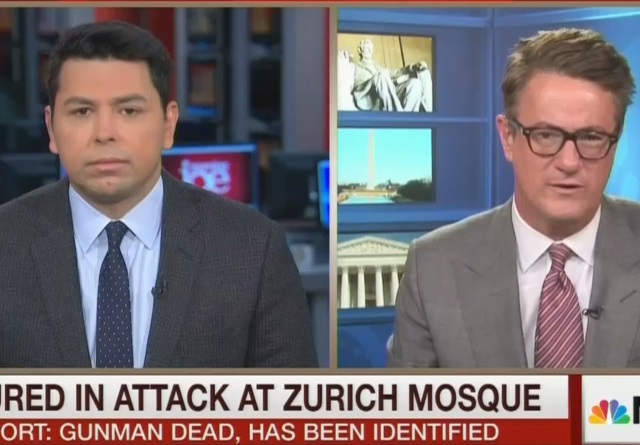 In the wake of yesterday’s terror attacks, including the one in Berlin in which 12 people were killed and many more injured, Donald Trump tweeted that the civilized world must “change thinking.”

A disdainful Joe Scarborough reacted on today’s Morning Joe: “I don’t know exactly what the civilized world is going to do about trucks, unless we’re going to ban trucks. But again, some of the deadliest attacks have been with vehicles.”

ISIS is claiming responsibility for the Berlin attack, saying one of its “soldiers” carried it out. The truck in the Nice attack that killed 86 people was driven by a Tunisian living in France. So no, we can’t ban trucks. But we can put strict limitations on the entry into Western countries of people who might drove those trucks into crowds of innocents. Is that really so hard to understand?

NOTE: when this blog item was published this morning, it had been reported that a Pakistani refugee had been arrested and was believed to have carried out the attack. Subsequently, that person was released for lack of evidence. The blog has been amended accordingly, as reflected in the preceding paragraph.

MIKA BRZEZINSKI: President-elect Donald Trump weighed in on the trio of yesterday’s attacks, tweeting out this: “Today there were terror attacks in Turkey, Switzerland and Germany. And it is only getting worse. The civilized world must change thinking.” Joe.

JOE SCARBOROUGH: Um, yeah. Ayman [Mohyeldin], let me go to Ayman right now. First of all, I don’t know exactly what the civilized world is going to do about trucks, unless we’re going to ban trucks. But again, some of the deadliest attacks have been with vehicles.

See, Mika’s not so dumb. She sets up the question without committing herself to anything asinine. Then Joe kicks the ball, misses, and lands flat on his face. Joe ends up covered in dumb, while Mika’s designer scarf remains pristine. Not dumb at all.

Wasn’t the actual truck driver the dead Polish man in the truck? What would stop any truck from being hijacked? What is wrong with all these dumb bunnies who want to ban everything and still let the people in the country who want the citizens dead? The civilized world has to wake up and realize that they are under attack by people their own governments allowed in for “compassionate and humanitarian” reasons. It isn’t safe out there folks, so act accordingly.

Joe wasn’t arguing for a ban on trucks. To the contrary, he was suggesting that’s not feasible. But that said, he seemed to throw up his hands, as if the problem is therefore insoluble.

In doing so, he overlooks the obvious solution: limit immigration by people most likely to drive trucks into crowds.

I think what Joe was doing was giving the audience the ultimate choice if there are only two choices to make. One being the banning of trucks which is obviously not feasible. Or two, banning of muslim immigrants. This is an old TV anchor trick of making you, the viewer, make the unpleasant choice and inwardly force you to face your own bigoted feelings.

Yeah, and we don’t have any extra bedrooms so I guess they’ll have to bunk with our six year old son.

Refugee from what? The main political problem in Pakistan is Islamism, and these people take that with them when they leave.

Clearly there is a problem with all these automatic high capacity clip assault trucks out there in private ownership. Especially the black scary ones. Ban them!

Joe wasn’t arguing for a ban on trucks. To the contrary, he was suggesting that’s not feasible. But that said, he seemed to throw up his hands, as if the problem is therefore insoluble.

In doing so, he overlooks the obvious solution: limit immigration by people most likely to drive trucks into crowds.

Well, right, standard procedure for handling a question you don’t want to deal with—pretend it’s a different question. Of course Joe didn’t handle that too well either; the trick is that the pretend question must be one you can handle. Biggest example today: abortion policy. Don’t want to handle the question of fetal “rights”? Pretend it’s really about “women’s health”; fielding that one’s easy.

I slam Islam. Is lam(b) tastier than pork? ???? If Moose limbs are angry all the time, shouldn’t they rename their religion “Pislam?” “Aloha Snackbar!”, Religion of the Pissed-off Losers (ROTPL) ????

I am not a scholar of islam but I do know that there are the sharia followers and the muslims that doesn’t seem to do so. Trump actually mentioned something along these lines when he said that we need to ask certain questions during the vetting process. I realize that they can lie but shouldn’t sharia be a disqualifier for anyone trying to immigrate here? The nature and aim of sharia are to conquer and control the nonmuslim world through any means necessary. How can that be compatible with our Constitution? The carnage and sexual assaults on men and women in Europe show that this isn’t just a cultural difference but a core belief and religious difference. Oil and water come to mind when I think about living together with this bunch.

The real problem is Islam. It was created by Muhammad as a religion of war dedicated to world conquest and the imposition of a Sharia based tyranny. The “peaceful Muslims” aren’t real Muslims, they are apostates.

We can’t ban sedans, but what about the Somali “refugee” who drove into a crowd at Ohio State then jumped out and stabbed people?

MSNBC gets more viewership through LI than it does on its own, lol.