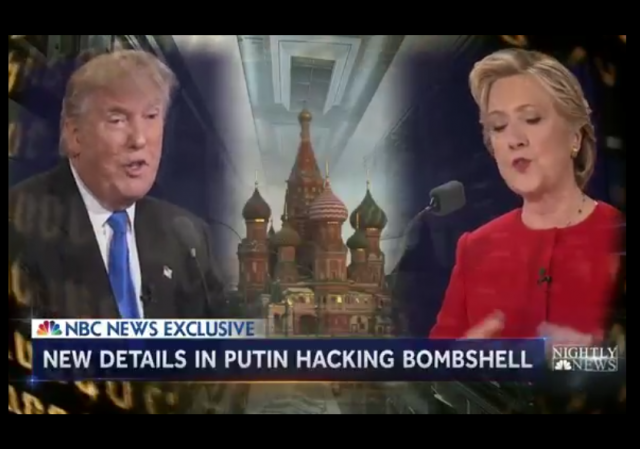 Anonymous sources and leaks have fueled an unhinged quest to flip the Electoral College against Trump.

The narrative has been, depending on which rant you are reading at the moment, that Russia “hacked the election,” was unfair because it didn’t also release RNC emails, Trump is a really bad hombre who must be stopped at all costs, etc.

But tonight the anonymous narrative took a new turn.

The Obama administration didn’t respond more forcefully to Russian hacking before the presidential election because they didn’t want to appear to be interfering in the election and they thought that Hillary Clinton was going to win and a potential cyber war with Russia wasn’t worth it, multiple high-level government officials told NBC News.

“They thought she was going to win, so they were willing to kick the can down the road,” said one U.S official familiar with the level of Russian hacking.

The administration did take action in response to the hack prior to the election. In September, President Obama privately confronted Vladimir Putin about the hacks at the G-20 summit in China. He warned the Russian President of unspecified consequences if the hacks continued….

“I think it is a legitimate question and I think given the stakes at the national level the question deserves an answer,” said ret. Adm. James Stavridis when asked by NBC News about the level of the administration’s response. “In retrospect it certainly seems as though it was a mistake not to call the Russians sooner and respond to them in a very forceful way.”…

Intelligence sources emphasize to NBC News that there is no evidence that Donald Trump collaborated behind the scenes with Putin or the Russians.

That new anonymous twist won’t stop the foaming at the mouth, because none of this is about hacking, it’s about Trump winning.

…and now that the election is over and the ‘wrong’ candidate won, the current administration has absolutely no problem throwing every single thing they can at Russia in order to provoke the conflict they wanted to avoid before.

Another month of Let Enfants Terrible before an adult (well, an older person) takes the Presidency. I wonder how many wooden shoes they can throw into the gears before they’re chased out.

because none of this is about hacking

None of it’s about truth, either.

So, according to this latest fantasy, Obama laid down the law to Putin … and Putin blew him off, and dumped all the embarrassing info anyway. Yeah, that’s the way to “lead from behind” …

Considering all the lying Obama and Co. have been doing, one would think that they’d be getting good at it. But no, they can’t even do that.

So, what is his reason for not getting tough with the voting fraud in Detroit? It cannot be because the right candidate didn’t win.

The vote is the vote is the vote. That’s all that matters. Speculation, assertions, charges and counter-charges, shaping of possible narratives none of this will do. In the absence of credible facts and evidence, substantiated and verified, there is only one course for the Electoral College: the vote. And, as we all know, it gave Donald Trump the necessary count to win the presidency.

More fake news on stilts from the three least reliable sources in the world: an anonymous Obama official, NBC, and the CIA.

Admitting to sit on their hands while other countries hack away at our national secrets….awesome legacy, Obama

It’s speculation that Russia tried to influence the election.

It’s a fact that the CIA is attempting a coup.

WikiLeaks claims that they got the emails from an “insider”, while intelligence sources believe they came from the Russians.

What if they are both right ??

Is there a Russian mole in the DNC ??

A Russian mole in the DNC, with access to their computers, downloaded the data and offered it to WikiLeaks. The mole then handed the data to the intermediary from whom the former British ambassador to Uzbekistan claims to have received it. The Russians then off the intermediary to prevent him from identifying the mole, who continues to operate within the Democrat party.

WikiLeaks and US intel are both correct (although US intel may be pushing “fake news” that happens to be true). And the only person who could ID the mole, intermediary Seth Rich, is dead.

“The Obama administration didn’t respond more forcefully to Russian hacking before the presidential election because they didn’t want to appear to be interfering in the election and they thought that Hillary Clinton was going to win and a potential cyber war with Russia wasn’t worth it, multiple high-level government officials told NBC News.”

The biggest lie in this is that Obama confronted Putin. More like he very timidily asked why Putin didn’t help Hillary win like they discussed earlier.

Obama had a moment of gracefulness in meeting with trump and promising a smooth transition. But that passed. Rather quickly

He cannot resist petty partisan attacks. It is his catnip. He’ll be worse post POTUS

And yet Obama has stated several times that this was a free and fair election with nothing out of the ordinary. He even went so far in the last couple of days to deny the whole Russia “hacking” scenario. Makes you wonder what on earth they are thinking . . .

Yep just replay that video of his haughty now wait a minute speech directed at Trump regarding elections.

I think this “new” narrative means they realize they have lost on the original, face a backlash, and are attempting to salvage what they can.

I’m ready for the next round. So far, the whole process for the last 1.5 years has kept me smiling.

Watching the commie left completely disintegrate is a great pleasure. Taking McCain and Graham with them is just a bonus.

I don’t believe all those theories that Obama is going to declare martial law, but sometimes his actions make it hard not to believe.

There are people surrounding Obama who are crazier than he is, and have a lot more to lose than he does. (Remember, this is a lazy narcissist – he’s going to be coddled for the rest of his life by the left, doing as little work as he did as president, but without the pressure, and all of the attention. His crazy army of secretive ‘czars’ infested in our government won’t the federal piggy bank to draw from anymore – not with The Donald in charge.)

Obama really is the titanic schumck we all said he was, and dumb enough, thankfully, to buy into the fraud of ‘Hillary Clinton’ – even after he got to know her!

The continual tearing apart his of ‘legacy’ and exposing the fraud of ‘Barack Hussein Obama’ will be very gratifying for years to come. Perhaps Obama’s keepers are so worried their ‘Madoff president’ will be exposed for the amazing fraud he is, they’re funding the unhinged front on Donald Trump as a distraction.

This is all smoke. The real issue here ISNT the hack but the fact that what was released was damaging to the DNC. And thats what the real problem SHOULD be but instead we have the brainless MFM running around in circles screaming about the sky falling and distracting their equally brain dead DNC supporters away from the terrible truth…that the DNC did this to themselves by writing all the sh1t in the first place!

What they are really angry about is the people being shown the truth (the real ugly truth of what the DNC was doing to attempt to “rig” the election in their favour through the deliberate collusion with the MFM).

True dat. Their complaint boils down to: The Russians hacked DNC computers and then influenced the election by exposing the truth about Hillary, Podesta, Mook, Palmieri, Brazile, et all, their tilting the playing field against Sanders, what they really thought about Hillary’s email problem, voters and Americans in general, and all their other dirty secrets.

At what point do all these activities to throw out the election results, overturn our democracy (constitution republic), violate the law, calls for Trump’s assassination, and so forth stop being sour grapes and becomes treachery or even treasonous efforts to undermine the safety and support for our country? At what point does all of these efforts become recognized as being nothing short of an outright effort to create division in this country with the intent to cause public unrest and anarchy?

Lets just for a second pretend that Russia actually did “hack the election” (whatever that means) and the administration knew about it.

The funny part is that Obama’s greatest talent over the last 8 years has been an uncanny ability to always find very logical, cautious rationalizations that justify doing nothing, no matter the provocation. He’s an absolute expert at doing nothing.

And suddenly, the Democrat Party has learned what it truly means to be a benificiary of his largesse.

(prediction – Obama says he will retaliate against the Russians before he leaves office. This will amount to a whole lot of nasty sniping at Donald Trump, and a couple of sternly worded letters to Vladimir Putin. And that will be it, because that is all Obama has ever been capable of)

Meanwhile, over at Reddit, there are links news stories showing that Comey does not buy it and to an interview with Julian Assange, founder of Wikileaks and publisher of the DNC and Podesta emails, where he states unequivocally that those leaks did not originate from Russia.

And the kiddies are merrily posting comments pretending to be Russian versions of David Brock’s CTR (which is real).

This story is crumbling under the weight of ridicule, because it has no foundation.

Podesta emails prove that Hillary was planning to spread the “Trump is involved w/ Russia” lies since April!
https://twitter.com/TEN_GOP/status/808432378553237509

Could Russian Election Hack Hysteria Have Roots Within the Democratic Party?
https://titanicbrass.com/2016/12/12/could-russian-election-hack-hysteria-have-roots-within-the-democratic-party/

Assange says the podesta leaks did not come from any government
http://www.foxnews.com/politics/2016/12/16/wikileaks-founder-assange-on-hacked-podesta-dnc-emails-our-source-is-not-russian-government.html

Attorney General Lynch: No ‘Technical Interference’ From Russia During The Election
http://townhall.com/tipsheet/mattvespa/2016/12/15/attorney-general-lynch-no-technical-interference-from-russia-during-the-election-n2260313

Putin says for Obama to put up or shut up
http://archive.is/DT7Iu

NSA Inspector Who Criticized Snowden for Not Using ‘Official’ Channels Found Guilty of Retaliating Against Whistleblower Who Did Just That
http://planetfreewill.com/2016/12/16/nsa-inspector-criticized-snowden-not-using-official-channels-found-guilty-retaliating-whistleblower-just/

The Washington Post narrative is crumbling under the forces applied by a bunch of technically-savvy kids who resent being called racists.

Lars Larson was talking on a local Seattle radio show this morning and talked some sense. He said Russia gets 85% of it foreign revenue from oil and gas. So does it make more sense that Putin would work to support Trump, who promised to unleash the American energy sector, or Hillary, who promised to close coal mines, stop fracking, restrict oil exploration and generally go green? Which candidate’s platform would result in a crash of the Russian energy sector?