Muslim Comedian Sits Next to Eric Trump on Flight, Asks About Muslim Registry

Muslim Comedian Sits Next to Eric Trump on Flight, Asks About Muslim Registry

“You gonna really make my people get ID cards and all this? 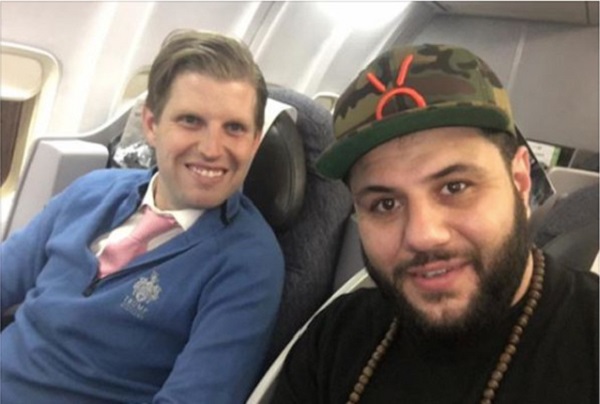 Comedian Mo Amer was seated next to Eric Trump, President-elect Donald Trump’s son, and posted to his Facebook page about the conversation they had on the flight.  Amer is a Muslim, so he engaged Trump on his father’s Muslim registry, ban, and etc.

The comedian said he had flown back to the US from his last tour in Australia and booked the six-hour flight to Scotland “last minute,” and was unexpectedly upgraded to business class.

He said he felt some tension on the plane and was shocked to find out who would be his seatmate.

It took him a minute before he sat down to process the situation. “When I sat down I said: ‘How you doing?’ Trump says: ‘I’m doing good.’ And I said: ‘You have no idea how fantastic this is for me right now. My name is Mohammed. Salams. I’m a standup comedian. This is fantastic for me.’”

“And I said – just FYI I’m not getting that ID shit done. You gonna really make my people get ID cards and all this? You know we’re not doing this shit,” he said in reference to a proposed registry for immigrants from Muslim countries, which has made headlines, even after Donald Trump’s 2016 election win.

Amer said that Trump replied: “Ah, come on, man. You can’t believe everything you read. Do you really think we’re gonna do that?”

He told Trump he thought his father had played the media like a fiddle, and knew the tricks inside that “created this firestorm”, and how it had “worked out lovely”, to which he said Trump replied: “Yeah you’re absolutely right.”

“That’s what he told me. He basically acknowledged the fact that his father played this thing like a mad genius and that’s how he got elected and he admitted it.”

Not to be confused with Mo Amir, the Cricket player.

I’m going to have to think about that one for a bit.