Substitute any other group, and MTV would be the first to cry foul. 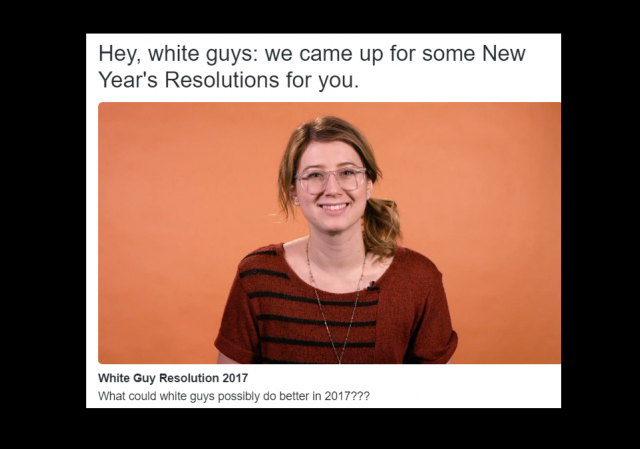 The video reduces tens of millions of people to stereotypes based on race and sex.

Substitute any other group for White males, and there is no doubt that MTV would be the first make the accusation of racism and sexism.

MTV doesn’t appear to be apologizing to the flood of tweet calling it out for its racism and sexism.

The video is being widely criticized as racist and sexist because it singles out and stereotypes a group based on race and sex, and then treats that group in a derogatory manner.

I would like to add your response to our coverage of the dispute, so that our readers know MTV’s position.

Does MTV have a response? Please email me as soon as possible.

I will let you know if I get any response.

.@MTVNews Racist stereotypes are not funny, why do you think it's okay?

imagine if you changed the word white with another race. Trying to discourage racism by being racist. Good job MTV

Hey, @MTVNews, I have a New Year's resolution for you as well. It involves performing anatomically impossible acts. https://t.co/trUMiRBY7n

@MTVNews Annnnnddd we have another reason why the Democrats lost the election.

Besides, I’m waaaay too old to watch juvenile TV…

world dammit… Where the hell is an edit option WP???

Dutch auction at my LGS, have my eye on a Kimber! How long can I wait?

An accident or planned by John Browning…. President Trump will be 45.

These malignant ignoramuses need to be continually ridiculed, defunded, boycotted and/or fired at every opportunity.

The inertia of progressive (i.e. monotonic) corruption leads sanctimonious hypocrites to the Choice that judges human life not by the content of their character, but by the “color of their skin”.

MTV = fake news and identity (no music, and certainly not quality “TV”)

Do MTV advertisers implicitly support racism and sexism through their financial support of MTV?

After viewing the vid, all I can say is “Isn’t that special!”

Modern lessons learned by our esteemed colleges in the USA.
>
1. If you judge any group of non-white people and stereotype them in a derogatory sense, then you are a racist. If you do this with white people, then you are enlightened.
>
2. If you rail against radical Islamic extremists then you are a bigot because you obviously mean all Muslims. If you rail against Christians then you are enlightened because everyone knows that all Christians are terrible people and that, in today’s world, hearing of the word of God from a Christian is every bit as bad, if not worse, than a Muslim man driving a truck into a crowd of killing dozens.
>
3. If you believe in climate change such that you deny the extensively documented science that shows how the Earth has warmed and cooled significantly over the last 1,000 years, then you are not a denier and are, instead, enlightened. If you refuse to believe a theory that has resulted in models that continually overstate future warming, has failed to take into account the warming hiatus over the last 15 years, and treats a minor greenhouse gas (CO2) as being the primary greenhouse gas, then you are a “denier” and deserve to lose you funding , employment, and any respect you may have garnered over your career.
>
4. If you are a man among the 0.3% of the population who claims to be a woman trapped in a man’s body, then you are allowed to use women’s facilities for your fear of ridicule, safety, and not being among those with whom you identify, is simply to much for society to pace upon you. If you are a female who fears a bearded man disrobing and using the women’s facilities simply based on his say so, then your fears stemming from a lack of privacy, perceived loss of safety, and so forth, is simply unfounded hysteria.
>
5. Smart and enlightened people know that Black Lives Matter is a just and important organization because it calls out the 4% of the black deaths that occur at the hands of the police and, rightfully stated, being involved in committing a felony, attacking the police with deadly force, or any other excuse, is no justification for this absurd slaughter of black men by the police. The remaining 96% of black deaths caused by other blacks from gang warfare, drug violence, and so forth, is trivial and of no importance. The high rate of criminal activity and murder by blacks against whites or the police are likewise trivial and unimportant.
>
These are the lessons we and college students learned over the last year. This is but a small sampling for there are many other issues that are treated with the same anti-logic (gun control, laws concerning classified material, voting and voter registration laws, using Executive Orders and their ilk to create laws, etc.) No one seems concerned that Kennedy was great because he started the mission that caused America put a man on the moon while Obama is thought great today because he created the conditions necessary to put a man in the women’s restroom.

Bravo Zulu! Well said, Cleetus. I was getting ready to send a link to that moronic spew to a select group of friends when I caught your response; now I’m going to append your comments verbatim … with full and proper attribution, of course!

This makes me want to do a list of “Hey Black Guys, here’s some New Years Resolutions for you:”

“Hey, Muslim Guys, here’s some resolutions for you:”

Actually that one would start with STOP KILLING WOMEN AND CHILDREN FOR NO REASON, JUST BECAUSE THEY’RE EASY!

“Hey Femininazis, Here’s some New Years Resolutions for you:” And that one would start with “STOP FETISHIZING ALL THE MUSLIM KILLERS JUST BECAUSE THEY’RE BAD BOYS WHICH IS WHAT YOU REALLY ALWAYS WANTED!?

God, I hate myself and all you other white mf-ers.

I had to stop watching part way through because I was crying too hard. (hee, hee)

As someone alluded above, only white people can be racist. Now I can cross that off my “To Do” list.

This is what you get when your self awareness drops to 0.

Who makes resolutions for other people? Is that “a thing”?