Morning Joe’s Surprising Support for Trump’s China Move: A Way to Get ‘Leverage’

Morning Joe’s Surprising Support for Trump’s China Move: A Way to Get ‘Leverage’

‘Pushing back a little bit on China: not the worst thing for an American leader to finally do.’ 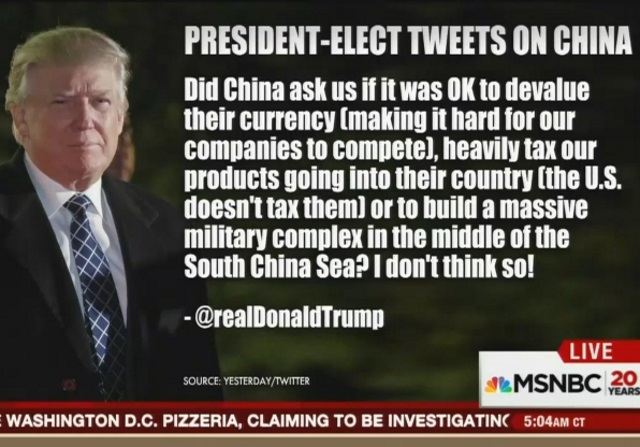 The American foreign-policy establishment is wringing its collective hands over Donald Trump’s phone conversation with the President of Taiwan, and his subsequent tweet in which he took China to task for its currency devaluation, tariffs on American products, and military build-up in the South China Sea.

But there was some surprising support for Trump’s initiative on today’s Morning Joe. First, Mark Halperin said this showed that Trump wasn’t planning to be a passive “inbox president” [Ed.: sayonara, leading from behind], and that it was a way for the US to get “leverage” on China where we had none before. Joe Scarborough described years of frustration in which every year Congress would extend China’s Most Favored Nation status for one year on the proviso that it improved its record, which it never did. Joe concluded that from his perspective and that of millions of Americans, “pushing back a little bit on China not the worst thing for an American leader to finally do..

There was an intriguing end to the segment. Going to break, Morning Joe played a riff from Rush Limbaugh’s famous theme song, A nod to a new reality? The era of Trump/Rush?

MIKA BRZEZINSKI: Last night on Twitter, Trump responded to the uproar, saying he does not need permission to speak with Taiwan: did China ask us it was OK to devalue their currency [making it hard for our companies to compete], heavily tax our products going into their country [the U.S. doesn’t tax them] or to build a massive military complex in the middle of South China Sea? I don’t think so!”

MARK HALPERIN: I agree with the Wall Street Journal editorial. We’ve not had leverage over China for a long time. This is easy leverage. And there are some risks involved but this shows that in some areas he doesn’t plan to be an inbox foreign policy president. He plans to try to change the board and to get leverage over countries that in a lot of areas we don’t have leverage. I think people who are unsettled by it better get used to it. Because this is the way it’s going to be.

JOE SCARBOROUGH: He is going to be a disrupter. Harold [Ford, Jr.] you were with me every year when we would voting on whether to pass MFN China.

JOE: What always frustrated me wat that every year, we said okay, we’re going to pass it for one more year, but thChina’s going to have to do a better job on human rights, they’re going to have to stop selling our intellectual property, they’re going to have to stop–I forget what the third thing was. Long story short, they would do nothing. In fact, their record would be worse every year. And so next year we would have the debate again, and the next year. We had absolutely no leverage over them because we wanted to get into their market so badly. And it was one of the things that Nancy Pelosi and I agreed on but it was so frustrating. We never held them to account. I’m not saying this is the way to do it. We have policy experts here that we’re going to get to in a second who I suspect will be very troubled by this. But I can tell you at least where I sat in congress and where millions and millions of Americans sit out there, there a lot of people saying, you know what, pushing back a little bit on China: not the worst thing for an American leader to finally do.

Note: Halperin mentioned that he agreed with the Wall Street Journal editorial on the subject. In it, the WSJ writes that Mr. Trump’s move might be “useful” and that a “tougher stance may prove to be a better opening move in the deal-making to come.”

After eight years of a President who barely managed to vote “present” when it came to foreign affairs, some maybe consider that the new “normal”.

Sorry, guys, the wake-up call has just come in …

And an item Trump missed in his short-list of Chinese annoyances—the only reason there’s a North Korea is because China thinks it’s cute to keep it around. It’s long past time for China to grow up and stop farting around with that fat guy.

To protest against China building military islands in international waters would you send over the Pacific Fleet in a threatening manor? Or, take someone’s phone call?

Matt, an excellent comment. Obama’s Utterly unimaginative Pacific strategy has been to sail USN vessels close enough to the fake islands to draw close PRC surveillance and maybe a protest. But it also risks accident or some other misadventure.

But the PRC doesn’t really care so much about that, a fact Trump grasped immediately. A phone call from Taiwan? That they care about.

A fact not grasped. America only has ONE president at a time. There were no exigent circumstances that demanded DT take or make phone calls AT THIS TIME.

Not sure I agree, but bonus points for “exigent circumstances” 😉

“A fact not grasped”, there is only one president that matters now and his name is Trump. And I think the circumstances are exigent.

Get used to it. The pussy currently in the WH will be gone shortly.