Merkel’s Germany: Christmas under the shadow of Jihad

Merkel’s Germany: Christmas under the shadow of Jihad 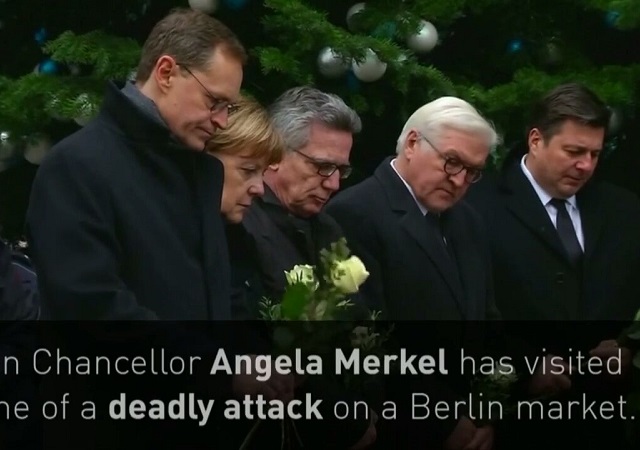 “I am horrified, shocked and deeply saddened,” Chancellor Angela Merkel told the press after 12 people were killed and at least 49 people were injured in a terror attack on a Berlin Christmas market. Police are still looking for the perpetrators after reportedly releasing a previous suspect. Tunisian identity papers were recovered from the truck used in the attack.

ISIS has taken responsibility for the Monday night’s attack adding to a long trail of death and carnage left behind by the Islamic terror in recent months. Following the incident, a team of 250 police officers searched a refugee housing at the old Berlin-Tempelhof airport. Details of the investigation are sketchy, but a nationwide manhunt is still underway.

Merkel did make some sort of an admission. Germany’s state-run DW News reported:

[…] Merkel acknowledged that the crime might have been committed by an asylum-seeker.

“I know that it would be particularly hard for us all to bear if it were confirmed that a person committed this act who asked for protection and asylum in Germany,” she said in a nationally televised statement.

“This would be particularly sickening for the many, many Germans who work to help refugees every day and for the many people who really need our help and are making an effort to integrate in our country.”

In the middle of her re-election bid, Merkel has repeatedly maintained that there was “no connection” between terror attacks in Germany and her “Refugee” Policy. But making such an obvious connection would be career suicide for any established German politician or career journalist.

Just days ago, German media and leading politicians had slammed the head of German Police Union, Rainer Wendt, for making the very same connection. After series of rape crimes this month, union chief Wendt dared to say that “criminals were using open borders.” Ralf Stegner, deputy leader of Social Democratic Party (SPD) — junior partner in Merkel government — condemned Wendt’s statement as “politically disgusting and stupid as one can get.”

“They died because of the recklessness of a western political class that has doubled down on a mad long-shot socio-political experiment that can only end catastrophically,” wrote conservative columnist Mark Steyn after the Berlin attack. A simple truth such as this would be offensive to Germany’s ruling elites.

Even before the blood of the innocent victims could be washed from the streets of Berlin, government-run DW News ran the story; “Pakistani and Afghan refugees fear backlash after Berlin attack.” The report said that the “attack has raised concerns about violence against Germany’s asylum seekers.” State media cares more about fictional backlash than real acts of terror and crime committed by the “refugees.”

Merkel, Germany’s ruling political class, and the big media continues to celebrate ‘diversity’ while opening Europe’s floodgates to millions of man exclusively from Arab and Muslim lands. This migrating group is not only the least diverse in terms of ideology, but most hostile to any other sort of deviation or diversity.

But if you are hoping for this liberal ruling class to realise its folly, don’t hold your breath.

The Berlin attack shows again how fortunate America is to have dodged the Hillary coup de grace.

It is not going to be any better Next Christmas in Germany. And, for any of the Foreseeable future.

Lord knows what the Ghost of Christmas Future would tell us about Germany now.

Merkel is joining Hillary as a meme for involuntary suicide.

Was this not a foreseeable outcome from Merkel’s policies?

Who benefits from this? Who makes money off of chaos?

Who benefits? Same as in the US. The government provides big time money to people and companies who do all the ground work, such as residence placement, food and clothing, transportation, admin work on a myriad of other gov bennies, legal rep if needed, etc., etc. These people and companies are preselected, friends and fans of whoever leads the government. My best guess would be that out of every $1,000 given to situate ‘refugees’, $300 is kept as profit, $200 gets kicked back to politicians and/or their parties, and maybe $500 goes to the intended use. That’s probably a conservative guess.

Catholics and Baptists get a lot of money from the government.

Separation of church and state being what it is(n’t).

But if you are hoping for this liberal ruling class to realise its folly, don’t hold your breath.

Trust me, I’m not. These people are liberals, they’re stupid and insane. The only thing that would stop them is the tire tracks of a jihadist’s truck running up their backs.

Back in September, Merkel suggested that the invaders should become truck drivers. How’s that working out for ya?

Don’t have any illusion that we won’t see a dozen like this on US soil in 2017.

Situational awareness is not to be taken lightly.

rinardman: Merkel’s party, the Christian Democratic Union, which claims to be conservative, not liberal, may actually be closer to our own “establishment Republicans”.

Merkel and Co. are practically paying these invaders to come in and rape, pillage and murder. Hi-vis truck/car attacks have become all too commonplace in Israel and have spread to Nice, Berlin and Columbus, Ohio. The situation is going to get worse before it gets better.

I expect that Merkel has a very efficient security detail to keep her safe from her own people.

It would be NICE if they were “horrified, shocked and deeply saddened” enough to produce some pragmatic action. Not ‘close enough to home’ yet I guess.

Hitler would be turning in his grave, if he wasn’t in hell.

Looks like Germany is headed for silent Christmases in the future as people will be afraid to celebrate out in the open.

There is something about this that really troubles me, aside from the horror of it, and that’s the notion that the perp would either lose or leave his ID and ‘paperwork’ (what ever that means) in the cab of the truck.

This just smells to high heaven. And no media types have appeared to so much as raise an eyebrow over the awkward convenience here.

He may not have expected to live – perhaps there was an unexploded bomb in the cab, or he had been ordered to jump out, shoot people, then shoot himself at the end of his run. Or maybe somebody dusted the cab with false evidence after the fact. That would almost have to be the police and/or anti-terrorist intelligence officers. I’d like to know where Trump and Putin were at the precise moment.

Also possible he wanted his identity known and put them there intentionally. I don’t know how to think like a terrorist so beats me. But then why run?

And we can rule Trump & Putin out – a highly reliable source confirms they were playing a ping pong match at Comet Pizza at the time. Plenty of witnesses, airtight alibi.