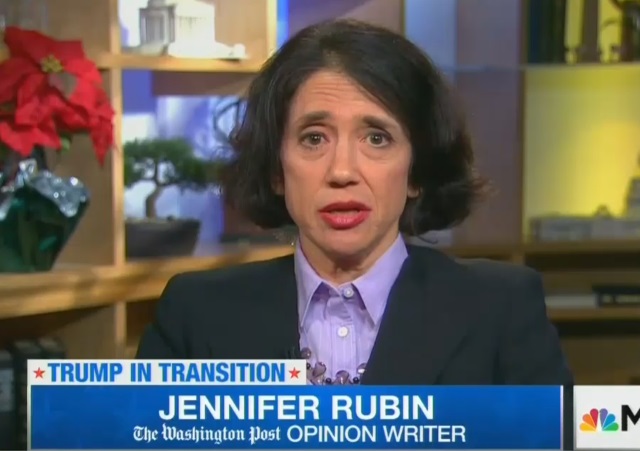 Jennifer Rubin is the Washington Post‘s “right” columnist, though many people would dispute that designation.

Rubin has made no secret of her Trump hatred, which came through today on MSNBC.

“I wish I could say that Ben Carson is the only person who doesn’t have experience in his area. You mentioned Tillerson. We also have Terry Branstad, who is the ambassador to China. He’s been the Governor of Iowa! And I like her, I think she’s smart, Nikki Haley, terrific person, but she’s going to the UN. But does she have any foreign-policy experience? So I think what we have are ignoramuses, billionaires, and a few generals.”

One small correction. Her voice is made for Morse Code.

Otherwise, please continue as you were.

That’s Pat Paulsen in a wig and lipstick. I thought he was dead

What in Jennifer’s background makes her an expert on any of the jobs she mentions? She is simply an over the hill hack working for a rich man’s personal blog in a dying industry.

It’s apparent that Trump is not taking any and all ignoramuses who apply–he returned the CV she supplied with her request to be the head of the Department of Redundancy Department.

To fill personnel requirements for any job in politics, one has a choice between new people with no experience in that job, or old retreads who have already proven themselves to be bad at it.

Funny, the head hack at the NY Times said, ‘We don’t get religion,’ yet all he has to do is listen to the likes of this character (or look in the mirror) to understand ‘leftist religion.’

Great fun and joyousness in being able to expose and ultimately ignore the likes of this malignant a-hole.

She really looks worn out. Being a token RINO, it’s probably because Jennifer enjoys each “Rub-in” that her fellow Lib/Dem colleagues give her, which made her both sore and looser.

and here is Tucker Carlson interviewing her the other day

I initially didn’t watch his show because I thought it would be his smug smarmy F&F weekend persona. Unleashed, he’s quite good. (different producers?) She’s a self-important asshole and RINO

I think the difference between his weekend show and his new show is format not producers. He loves debate, and I remember seeing equally fun clips when he filled in for Hannity for example. Don’t watch Hannity because he’s too shrill for me. But the posted clips of Tucker were as good as his current new show at times. Now he seems more willing to get aggressive, probably because he has full license from attorneys and top management, etc.

I enjoy their misery

Who is Jennifer Rubin?

Just some useful schumck to the left.

Yeah, because political hacks who live off tax funds have done so much better than those who achieved real success in the outside world. Lefties have no idea just how stupid they sound when they open their mouths. The current POTUS was elected because of his race and look how well that turned out.

Why is Robert Downey Jr. in drag, and why does he think we give a shit about his elitist political opinion?

An earlier iteration of Rubin was once one of Commentary’s best writers. She went to WaPo and took lots of heat for her unblinking support of the Iraq War. Trump’s candidacy gave her a way out of the conservative fold, where I doubt she was ever comfortable. Over the past year she’s morphed from NeoCon to Never Trumper (not too big a leap) and then to full throated supporter of HRC.

She’s an epigone of the aging Boomer feminist elite. In her case you really should move along because there really isn’t anything to see here.

The comment has been made that, with one or two exceptions, Trump’s cabinet is shaping up to be essentially what a Cruz, Rubio, or Romney cabinet would have looked like. And that’s basically true. And had that been the case, Rubin would not have batted an eye. Agree with them philosophically or not, there are no glaring cases where these picks are not competent or qualified to do these jobs.

These virulent #NeverTrumpers are intent on trashing Trump no matter what! If Trump met their demands for one criticism, they would immediately move on to something else. We need to just accept that these people are sore the neocons lost their hold on the party and can’t be pacified, hence their opinions are not important.

Nice to know that the governors of Iowa and North Carolina are “ignoramuses”.

Okay fine. Flyover country. Only the people on the coasts matter. Whatever. The world needs to be ruled by credentialed elite or else we’re all DOOMED. Just bend over and take it.

Rubin is as much a conservative as Warren is an Indian. She’s a token commentator for the “right” but in name only.

she left out “deplorable”…

no style points for her!

And people wonder why Wa-Poo’s readership is plummeting.

I was (and still am) in the “wait and see” camp on President Trump.

Some of his picks have been great, and I’ve stood up and cheered. Gen. Mattis as Sec Def? FINALLY FOR THE LOVE OF GOD someone who KNOWS how to fight a war. see Chuck’s rules of war: there is ONE RULE of war – WIN. There is ONE corollary to that rule: Inflict maximum damage at acceptable cost. further see “Ender’s Game” by Orson Scott Card (read the book, skip the marginal movie) and the essay “Ender Wiggin, USMC” by John F. Schmitt. The goal of war is not only to win THIS conflict, but to so decimate the enemy that they CANNOT raise arms against you again. EVER. Gen. Mattis will not only do that, any soldier serving in a conflict will be happy about it because the rules of engagement will finally be clear.

Betsy DeVos? – Very good choice: The Teacher’s Unions should be quaking in their boots, because she’s going to turn around the federal infrastructure on Education in a matter of WEEKS (not months or years: weeks).

Scott Pruitt? – WONDERFUL choice to head EPA. Take names and put boot to ass to get the EPA back to it’s mission, rather than it’s touchy-feely un-provable Anthropomorphic Global Change crap that they’ve been shoveling for 30+ years now.

Dr. Ben Carson for Sec. HUD? I can see that and I think it’s a good fit (it would have been a waste to make him Surgeon General). Sec. HUD he can implement a lot of the clean-up that needs to be done to the inner-cities in order to get them functional again. Behavior modification by carrot-and-stick approach.

Gen. Kelly as Sec. Homeland Security? Ok, Trump is SERIOUS about securing the border. It appears that not only will the wall ACTUALLY get built, it’s going to be a hardened fortification. My design hope? A double-no-man’s-land setup with mounted machine-gunners visibly stationed on it at regular intervals, and authorization to shoot into no-man’s land first and ask questions later.

Cathy McMorris Rodgers as Sec. Interior? – Ok. Sure. Fits with head of EPA.

Andrew Pudzer? – has made some unacceptable statements on immigration in the past. But, DOES understand low-wage, low margin industries where people get EXPERIENCE (fast food), which usually leads to upward mobility (call it proof-of-concept for an employee). Waiting to see.

Seema Verma at Medicare/Medicaid? Don’t know about this one yet. Depends on her mindset. Waiting to see.

On the other hand, some of his floated picks have been cringe-worthy (Romney as Sec. State? NO THANK YOU). Elaine Chao? I think that there are better picks, but maybe Trump is using that to allow Sen. Surrender McConnell to gracefully retire and have someone else appointed to the Senate. Or, maybe he’ll use it as leverage to get McConnell to actually FIGHT the Democrat Senators.

Rex Tillerson for Sec. State back-stopped by John Bolton? I can get behind that.

Mnuchin, Branstad, Ross and Ricketts? – I don’t have any strong feelings about these. They’re finance guys, with a lot of specialized expertise. They’ll at the very least bring a business focus and cost-benefit analysis mindset to their various positions.

As for Jennifer Ruben? She might call them “ignoramuses, billionaires and a few generals” but each one brings a specific expertise to the position that they are going to occupy which is desperately needed in that organization to counter-act the last 24 years of Democrat-powered installation (Bush didn’t clean house at the civil-servant level, so he got a LOT of Clinton hold-overs).

What we WILL see is a change of direction for a LOT of federal agencies REALLY fast.

The most ironic thing – and the most laughable – is her failure to comment on the malignant lunatics and clowns appointed by little barry over the past 8 years.

The best thing about people like her and others such as George Will has yet to come. When things work out (and if they do), they will either have to recant or become less relevant. Or join the left.

Looking forward to racist, aging old white females like her to die off and be replaced by intelligent people without the hate.

…as opposed to Obama who hired a bunch of ignoramuses who *tried* to become billionaires while in their government positions.

I wonder what people have got against generals and billionaires. I’d think those were good indications of talent and intelligence. How is a political background better?

Gee, I do that every time I post something here. I guess I am an opinion writer too.

Washington Post, oh, that newspaper that I stopped subscribing to 3 years ago because all the articles are written by foreigners or LGBT journalists.

Oh, and this interview is on MSNBC?

Am I missing something?

Oh, she is suppose to be blogging “for” the right wing.

There has to be better news that this to report on.

Somewhere there is the echoing voice of a one term Senator from the great state of Illinois saying he had visited all 57 states. His SoS did all possible to sell us down the river and gut our foreign policy. If Trump tried he couldn’t do as bad as Obama. Jug Ears is the King of Screw Ups!

Funny thing, I liked Jennifer Rubin when she wrote for the old Contentions Blog at Commentary Magazine before she took the Right Turn gig at WaPo. But money changes everything.