Henry Kissinger On Russia: “I hope we’re hacking them back”

Henry Kissinger On Russia: “I hope we’re hacking them back”

“Everybody has a hacking capability. And probably every intelligence service is hacking in the territory of other countries,” 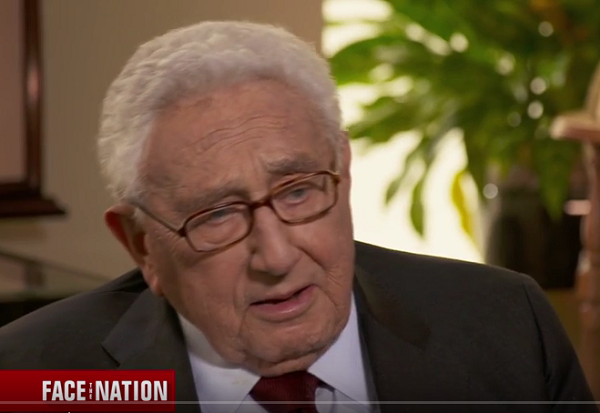 As DNC chair Donna Brazile contradicts Obama on Russian hacking and John McCain asserts that Obama has no idea what to do about the serious problem of Russian hacking that could “undermine our democracy,” Henry Kissinger offers some much-needed perspective.

Democratic National Committee Chair Donna Brazile said Russian hackers persisted in trying to break into the organization’s computers “daily, hourly” until after the election — contradicting President Obama’s assertion that the hacking stopped in September after he warned Russian President Vladimir Putin to “cut it out.”

“They came after us absolutely every day until the end of the election. They tried to hack into our system repeatedly,” Brazile told ABC’s Martha Raddatz in an exclusive interview on “This Week” Sunday.

Obama said at a press conference Friday that Russia’s “tampering” with the U.S. election process stopped in early September after he spoke to Putin at an international conference.

“In early September when I saw president Putin in China, I felt that the most effective way to ensure that that didn’t happen was to talk to him directly and tell him to cut it out, and there were going to be serious consequences if he didn’t,” Obama said. “In fact we did not see further tampering of the election process. But the leaks through Wikileaks had already occurred.”

Brazile said she supports Obama’s call for a thorough investigation of the hacking but she lamented the administration’s failure to protect the party and its infrastructure.

Meanwhile, John McCain notes that Obama has no strategy and no policy regarding potential cyber attacks.

Sen. John McCain (R-Ariz.) blasted the White House on Sunday for how it handled Russian hacks in the runup to the election, saying the U.S response to the meddling has been “paralyzed” so far.

“The president has no strategy and no policy as to what to do about these various cyberattacks that have possibly disrupted an American election,” McCain told Jake Tapper on CNN’s “State of the Union.” “There’s no doubt they were interfering. The question now is how much, what damage [was done], and what should the United States of America do. So far we’ve been totally paralyzed.”

During the same Tapper interview, McCain also stated that because of Obama’s weak leadership, Russia has an opening to “destroy democracy.”

“This is the sign of a possible unraveling of the world order that was established after World War II, which has made one of the most peaceful periods in the history of the world,” McCain told CNN’s Jake Tapper on “State of the Union.” “We’re starting to see the strains and the unraveling of it, and that is because of the absolute failure of American leadership.”

“When America doesn’t lead, a lot of other bad people do,” he added.

McCain’s calls so far have been rejected by Senate Majority Leader Mitch McConnell and House Speaker Paul Ryan, who have backed investigations but said they want to see them conducted through already-existing Senate and House committees.

“This is serious business. If they’re able to harm the electoral process, they may destroy democracy, which is based on free and fair elections,” he said.

Appearing on Face the Nation, former Secretary of State Henry Kissinger provides some much-needed perspective as he notes that “everybody has a hacking capability. And probably every intelligence service is hacking in the territory of other countries.”

Former Secretary of State Henry Kissinger, responding to intelligence reports that Russia directed hacks to interfere with the U.S. election, is hoping that the American government is retaliating against the Kremlin with cyberattacks of its own.

“I don’t doubt that the Russians are hacking us,” Kissinger told CBS’ “Face the Nation” in an interview that aired Sunday. “And I hope we’re doing some hacking there.”

“Everybody has a hacking capability. And probably every intelligence service is hacking in the territory of other countries,” he said. “But who exactly does what? That would be a very sensitive piece of information. But it’s very difficult to communicate about it. Because nobody wants to admit the scope of what they’re doing.”

At last, the voice of reason.  We all know that every country who can hack is hacking, including our own, but it’s easy to get swept away from this key fact as we are being hyped up about John Podesta clicking on a phishing link from his unsecured gmail account somehow resulting in a supposedly “illegitimate” presidential election.

Kissinger goes on to provide some insight into Putin and his motivations.

“He is a man with a great sense of connection, an inward connection, to Russian history as he sees it,” Kissinger remarked of Putin, who intelligence sources have said gave direct approval for the recent hacks in the U.S. related to the 2016 presidential election.

“He is a cold calculator of the Russian national interest, as he conceives it, and which he believes, probably correctly, has some very unique features,” Kissinger said.

“For him, the question of Russian identity is very crucial. Because as a result of the collapse of communism, Russia has lost about 300 years of its history,” the former secretary of state continued. “And so that the question of ‘What is Russia?’ looms very large in their mind. And that’s a problem we have never had.”

“Brazile says she supports Obama’s call for a thorough investigation of the hacking but she lamented the administration’s failure to protect the party and its infrastructure.”

By all means I would like to know as well. Did it originate by phishing Podesta’s email or was it that unprotected server in Hillary’s bathroom. Maybe we can blame all those Blackberry phones Hillary lost.

While we’re at it start an investigation into the fraud committed during the Democrat nomination process which allowed Hillary to get the nomination.

And let’s have a deep-dive into how so many Detroit voting precincts registered more votes than they had voters. Funny how they dropped that turd right at the closing bell, huh? I think they were trying for a repeat of when Dim fraud in Chicago stole the 1960 presidential election.

I found John Dickerson’s interview of Dr. Henry Kissinger rather interesting. The 93 year-old former National Security Adviser and Secretary of State holds holds his own on topics including the hacking question, NATO, Russia and Putin, Europe, China, and some perspectives about Donald Trump. The vid is 18 1/2 mins. I got more ought of it than combined comments by John Kerry and Hillary Clinton.

Secretary of State nominee Rex Tillerson, if he hasn’t already, would do well to have some in-depth conversations with Dr. Kissinger.

talk about “hacks”, HK is one…

he needs to just go away: he’s done enough damage to the world already.

Brazile is now learning what happens when your credibility is gone. She couldn’t get anyone to listen to her in a burning building if she cried “Fire”. Her days of influence are over. She and anthony weiner can start a website named “Integrity” and charge admission.

Because as a result of the collapse of communism, Russia has lost about 300 years of its history

This is a very strange statement.

Because as a result of the collapse of communism, Russia has lost about 300 years of its history.

Well yes , the Stalinists obliterated the Pre 1917 history and I suppose Putin is obliterating Pre Soviet dissolution history ,
But yes it is a strange statement .