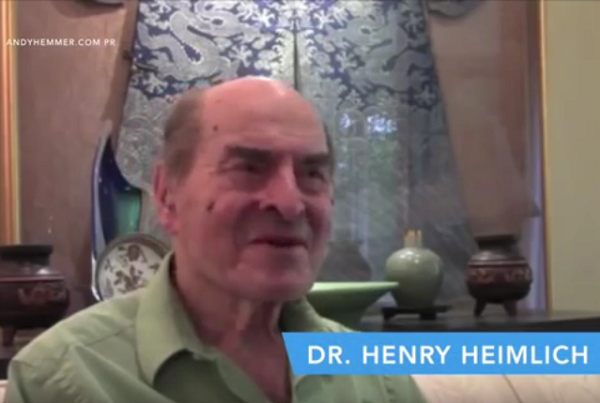 The Ohio doctor who invented the Heimlich maneuver has died at the age of 96.

Henry Heimlich, the Ohio doctor who developed his namesake maneuver to help choking victims, died Saturday, his family said. He was 96.

Heimlich died at Christ Hospital in Cincinnati after suffering a heart attack Monday, his family said in a statement.

“Dad was a hero to many people around the world for a simple reason: He helped save untold numbers of lives through the innovation of common-sense procedures and devices,” his family said in a statement.

Heimlich was director of surgery at Jewish Hospital in Cincinnati in 1974 when he invented his Heimlich maneuver, a technique that helps clear a choking person’s airway by putting pressure his or her diaphragm through abdominal thrusts.

. . . .  During World War II, he served in the U.S. Navy, treating Chinese and American forces behind Japanese lines in the Gobi Desert.

While working as a surgeon, he invented the Heimlich Chest Drain Valve, which is used during chest surgery.

It’s unknown how many thousands of people in America alone owe their life to Dr. Heimlich, but he estimated that it was approximately 100,000.

Earlier this year, the 96-year-old Heimlich used his maneuver for the first time and saved the life of a woman who was choking on a hamburger.