Hawaiian Cafe: Trump Voters Can Eat Here After All

Hawaiian Cafe: Trump Voters Can Eat Here After All 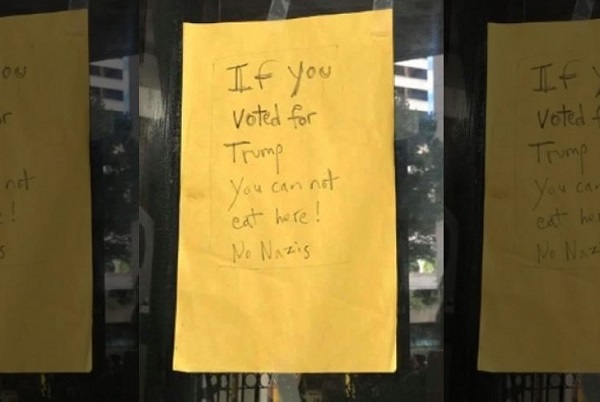 A Hawaiian cafe owner posted a sign that read: “If you voted for Trump you can not eat here!”  It appears the cafe owner has had a change of heart, and is now willing to accept the money of Trump voters after all . . . if any still wish to dine there.

A business owner who posted a sign on the entrance of his eccentric Italian café in downtown Honolulu banning President Elect Donald Trump supporters, has removed the sign one day after FoxNews.com broke a story about the severe policy.

“If you voted for Trump you cannot eat here! No Nazis,” declared owner Robert Warner on a bright yellow, handmade sign, which he taped to his Café 8/12’s front glass door.

While Warner claims business has been better than ever since the story went viral in news media across the world, he took the notice down on Wednesday, telling Hawaii News Now: “If somebody came in and said, ‘Hey, I know you can’t tell who I voted for, but I voted for Trump, would you let me eat?’ I would say, ‘Sure, if you’re nice with me and I’m nice with you and you like my food, sit down, no problem.”

Jali Warner, Warner’s wife, told FoxNews.com the same on Tuesday, noting if a Trump supporter ate there, “we don’t put anything different in your food.” Neither could be reached for comment by phone this week because the phone consistently rang busy.

Warner is known to channel the “soup Nazi” persona of New York City and “Seinfeld” fame — “throwing pots and pans,” “telling off customers,” and “hanging not-so-friendly reminders on butcher paper for his customers to read.”

Try that with a favored group and see what happens.

I’ll add to that: that very restaurant owner would likely be one who would demand you serve members of favored groups.

One can hope that the effect on his business is far worse than he claims. Sadly, one cannot hope that the government will enforce the anti-discrimination laws against a Leftist the way they do against anyone to the right of Trotsky.

I would avoid the place anyway, just on principle. But the comment about “we don’t put anything different in your food.” sounds a bit ominous.