The gunman entered the club dressed as Santa. 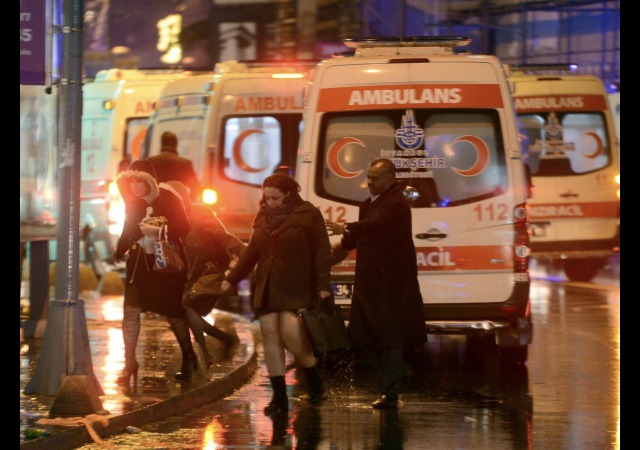 A gunman dressed as Santa Claus killed at least 35 people at a Reina Club in Istanbul, Turkey, in the early morning hours of New Year’s Day. From the Associated Press:

An armed assailant who is believed to have been dressed in a Santa Claus costume opened fire at a nightclub in Istanbul during New Year’s celebrations, killing at least 35 people and wounding 40 others, according to Istanbul’s governor Vasip Sahin and Turkey’s state-run news agency.

Sahin called the incident a “terror attack” but did not say who might have carried it out.

Footage from the scene showed at least six ambulances with flashing lights and civilians being escorted out. NTV said police had cordoned off the area and an operation to capture the assailant was ongoing.

An AP photographer says police cordoned off the area about 2 miles (3 kilometers) away from the nightclub and reported multiple ambulances passing by.

Hurriyet News Daily has reported that the government has issued a gag order, which means information will become scarce:

Meanwhile, Justice Minister Bekir Bozdağ has condemned the attack, saying that “no terror attack will destroy our unity.”

“No terror attack will destroy our unity and fraternity,” he tweeted.

The White House has issued a statement:

White House issues another condemnation for yet a new terror attack in Turkey. This became all too familiar to see: pic.twitter.com/91ch2Ktkyu

Some pictures have emerged on social media:

The Moment attackers raking the gate of #Reina night club w kaleshnikovs in Istanbul.
Seems no extra security despite the club under threats https://t.co/iHHRezEsi9

"This is a terror attack. At least 35 citizens have lost their lives," Istanbul governor says https://t.co/XcA2v6mGMj pic.twitter.com/j0XvRE3A7L

*This is a developing story. I will update as more information becomes available.*

“And when the sacred months have passed, then kill the polytheists wherever you find them and capture them and besiege them and sit in wait for them at every place of ambush. But if they should repent, establish prayer, and give zakah, let them [go] on their way. Indeed, Allah is Forgiving and Merciful.”

“No terror attack will destroy our unity and fraternity”

Without mentioning that to a Muslim like him non-Muslims and apostates are not part of that unity. This will go as is typical in Muslim countries: the authorities will be unable to find or arrest anybody associate with this attack, since the authorities cover for jihadists. Even if they make a show of convicting somebody their sentences are always commuted after a year or two, or they make a mysterious jailbreak (no doubt assisted by the prison guards) in the dead of night.

Also, when did Turkey become part of Europe?

It’s sad that anyone with some knowledge of history, and a sense of how things usually work could easily foresee what’s happening in the Islamic world. They were angry at the west because they were outclassed culturally and militarily, so they came up with the idea of terrorism, they played with it, they coddled it, they supported it, they snickered every time a terrorist attack happened in the west because they figured we had it coming to us.

And now, hundreds of thousands are dead across the islamic world, formerly organized nations such as Syria and Libya are nothing but charnel houses, and the deadliest terrorist attacks are happening almost daily in the world’s major islamic cities.

Although it’s tempting to cite “karma”, that word most of the time is just a handy description of the way the world usually works. Another way to put it is, be damned careful of the shit you start, because 9 times out of 10 that shit is gonna end up landing on your own head. Make that 99 times out of 100.

(Obama and most of the left are some more who’ve never figured that out. Maybe to be conservative is to simply understand how the world really works)

“Syria and Libya are nothing but charnel houses…”

No claim of responsibility yet. Could be Kurdish terrorists, could be ISIS. Usually by this time someone would have claimed it. There were reportedly lots of non-Turks among the victims, which makes me think it might be ISIS types. The Kurd radicals tend to target Turkish security forces.