Something tells me the regime will still put many restrictions on what Cubans can access. 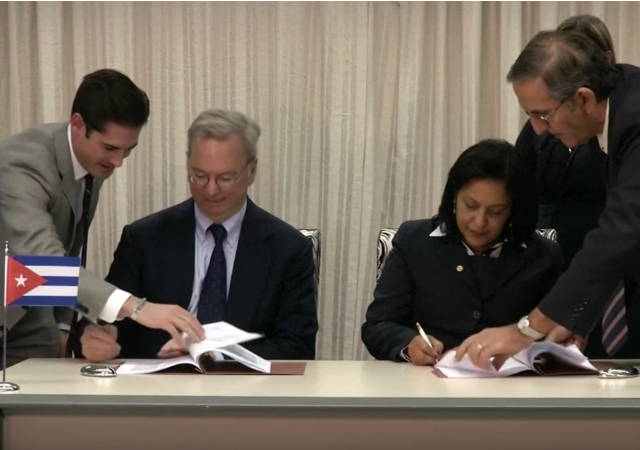 Google and Cuba finalized their deal to bring servers to the Communist island to allow high speed internet for users. The Wall Street Journal reported:

The Google servers in Cuba will store content such as popular YouTube videos, allowing the content to be delivered more quickly to Cuban users. The move is the latest to improve internet access for the country of 11.2 million people, which has long been one of the world’s most isolated nations.

Earlier this month, President Barack Obama’s administration pushed Google and GE to finish agreements with Cuba since President-elect Donald Trump desires to void the deal Obama and the brutal regime made in 2014 to warm relations between the two countries.

However, this will not benefit the regular Cuban people:

The deal announced Monday removes one of the many obstacles to a normal internet in Cuba, which suffers from some of the world’s most limited and expensive access. Home connections remain illegal for most Cubans and the government charges the equivalent of a month’s average salary for 10 hours of access to public WiFi spots with speeds frequently too slow to download files or watch streaming video.

The deal does not affect Cuba’s antiquated communications infrastructure or broaden public access to the internet, but it could make Google websites like YouTube or Gmail up to 10 times faster for users inside Cuba. Content hosted by other companies will not be affected.

Yeah, about that. See, the regime controls the media. American bullying or capitalism did not keep the internet from Cuba. The freaking Communist regime has. One UN agency said only 3.4% of homes in Cuba have access to the internet.

It really makes one wonder just how much regular people on the street will have an opportunity to enjoy the internet. Plus, if they do, the regime will probably install massive blocks on webpages. I doubt the regime will allow Cubans access to Facebook or Twitter. Access to YouTube? I want to know which videos the Cubans can view.

The U.S. Chamber of Commerce has reported that cellphones, wi-fi hotspots, and broadband connections have extended to homes, reaching almost 150,000 people. Nothing on what type of information the people can access, though.

Fascist governments are so cute and cuddly, aren’t they? The most understanding creatures.

The creepy Eric Schmidt thought the North Koreans were cute and cuddly, too:
https://www.bloomberg.com/news/articles/2013-03-21/in-india-googles-eric-schmidt-explains-why-he-went-to-north-korea

If you enjoy tree bark and weeds.

Oh, I do! I do! I’m the founding president of the Euell Gibbons Fan Club.

“Something tells me the regime will still put many restrictions on what Cubans can access.”

They don’t really need to. Any Cuban who wants to can access the internet. It’s just that the maximum wage is $20/mo. $30/mo. if you’re a valued professional like a doctor.

So, all you have to do is be willing to blow a month’s salary on a couple of hours of internet access.

Under Fidel the Cuban government barred ordinary Cubans from going into hotels, restaurants, bars, whatevs, that catered to foreign tourists. His little bro, Raoul, has “liberalized” the country. Now no one is preventing Cubans from going into those places. There’s no need. Cubans can’t afford it. You can, I hear, get into a fine argument with an aging campus sandanista by pointing out that the only Cubans they see around them in that tropical worker’s paradise are pouring or serving those mojitos.

Or whoring themselves out.

Oh, by the way, foreign companies who operate such tourist amenities pay a decent wage. But the Cuban government requires them to pay the $8 or $10 dollars per hour they pay their workers to the government. Which turns around and lets the Cuban chef or front desk clerk have 69 cents per day.

But the commies do let the locals keep their tips. So if you go to Cuba, and I never would, your hotel maid is making more money in a month than a doctor will in a year.

Which is why, if you’re an ordinary Cuban and you want to access the “free” health care you need to bribe your doctor or you won’t get treated. If you can find a doctor. A lot of Cuban doctors are sent abroad as slave laborers, as a form of barter so the Cuban government can get commodities such as oil or just hard currency. And not just doctors.

Oh, and a further by the way, bring your own medicine. There is none in the “free” health care system. Not even iodine. Also bring your own sheets. There won’t be any. For “free” you or your loved one just gets a filthy mattress.

The Cuban government does this to their own people for a reason. Since Cubans can’t live without engaging in black market activity, every Cuban can be extorted into turning informant for the state. I would call it “ham sandwich nation,” which is Tennessee law professor Glenn Reynolds/Instapundit’s term for the US, where a prosecutor can get a grand jury to indict a ham sandwich.

But there are no ham sandwiches in Cuba. Not for the ordinary Cubans (God help you when the police stop your bus in Havana, and they do that as well as set up roadblocks between major cities, and you have some beef or lobster in one of your bags).

“Fun fact.” Actually I don’t know if it’s a fact. According to the video the NORKs stuff things into the mouths of the condemned to prevent them from shouting defiance.

I heard they break their teeth.

Six of one, half dozen of the other, believe what you like. You’re dead either way. And whether they break your teeth or not you will not go to your execution in North Korea without intense pain. They enjoy it. The NORKs know this. Which is why you see them crying their eyes out when their leader dies. They’re too terrified not to.

I served with proud Americans from Vietnam to Poland. I have a healthy contempt for communism.

I appreciate the thumbs up @4:59 pm. I was thinking of a Vietnamese chick who managed to escape. And I offer no apologies for the use of the term. She was Navy blue, through and through. She would stand on a chair and denounce communism, with authority, because she lived it.

I would have married her, but she already was married.

She had to stand on a chair as she wasn’t even five feet tall. But she was a giant.

One UN agency said only 3.4% of homes in Cuba have access to the internet.

And those few lucky ones still access the net via dial-up at an inflated price.

A few years ago, a South Florida company obtained a permit from the U.S. Treasury to run fiber optics to Cuba. They would cover the cost.
The dictatorship declined and preferred to run another cable to Venezuela at 3 times the cost.
Why do such stupid thing?
Control.
With the Venezuelan cable they can censor and monitor traffic.

My bet is, the Google servers in Cuba will store a cache only of content approved by the dictators.

and next week we will see cuba nullify the gitmo lease (using fact they never accepted the US lease payments) and repurpose it for server farm location as there is a basic infrastructure there to use.

“The U.S. Chamber of Commerce has reported that cellphones, wi-fi hotspots, and broadband connections have extended to homes, reaching almost 150,000 people. Nothing on what type of information the people can access, though.”

My information may be out of date, but considering the Cuban government blames the US embargo for the fact that a smaller percentage of the population has cell phones than Haiti, and when you throw in land line phones only about 20% of homes in Cuba have any phone whatsoever (the smallest percentage in Latin America) and the embargo is still in effect not much should have changed.

Not many Cubans own cell phones because the cheapest phone available costs $55. Until about 2009 or 2010 the Cuban government didn’t allow ordinary Cubans to own cell phones, but when Raoul Castro took over from Fidel he lifted those restrictions.

This was as meaningless as lifting the restrictions on ordinary Cubans entering tourist spots, and for the same reason. Most Cubans can’t afford a cell phone. Remember, the maximum wage is $20/mo for Cubans who aren’t members of the political elite. So that’s nearly three months salary just to buy a phone.

Then it costs 35 cents per minute to make a phone call. Which is a lot when the maximum monthly wage breaks down to about 70 cents per day. While the political elite are well of by Cuban standards, they aren’t so well off they can afford to make many phone calls. Most Cubans use their phones only for texting or paging. And internet access isn’t available at any price (some foreign telecom companies offer data services if your phone or other mobile device is capable of international roaming and is compatible with the Cuban roaming service, but it isn’t a service provided by the Cuban telecom company, so while you can rent a Cuban cell phone, it won’t give you access to the internet).

Empresa de Telecomunicaciones de Cuba SA (ETECSA), Cuba’s sole telecommunications company, operates an increasing number of telepuntos or small internet cafes. You have to buy an access ticket which gives you a user ID and password. I have no idea if ordinary Cubans are allowed to buy an access ticket. Probably, as there’s no need to have a law against it. They can’t afford the access ticket and then the $2/hr to actually connect. Or by the minute. ETECSA also operates about 65 public WiFi hotspots. Again, you have to buy an access ticket and then pay the same connection fees you have to pay at an internet cafe. Which amounts to effectively a ban on ordinary Cubans accessing the internet as not only are the prices out of reach, you have to pay in Cuban Convertible Pesos. Very few Cubans are paid in convertible pesos. Most are paid in ordinary Cuban pesos which is essentially worthless. Cubans can buy staples in government shops that are oriented toward Cubans, but to buy something in the “Dollar shops” which are oriented toward foreign tourists or sell what the government considers luxury items you can only use convertible pesos. Which almost no Cuban has.

Commies are really good at fooling idiots like Michael Moore. Technically Cubans can go into the same bars, restaurants, or stores and buy anything they like. But in actuality almost no Cuban does because they’ll blow their entire months pay on just one entree or item, or a week’s pay on a beer. If they have the right pesos. And people like Michael Moore believe what they’re told, and never open their eyes and see that there aren’t any Cubans in the places they hang out. Except for the Cubans serving the foreign tourists.

It’s not necessary to have laws restricting an ordinary Cuban’s access to the internet.