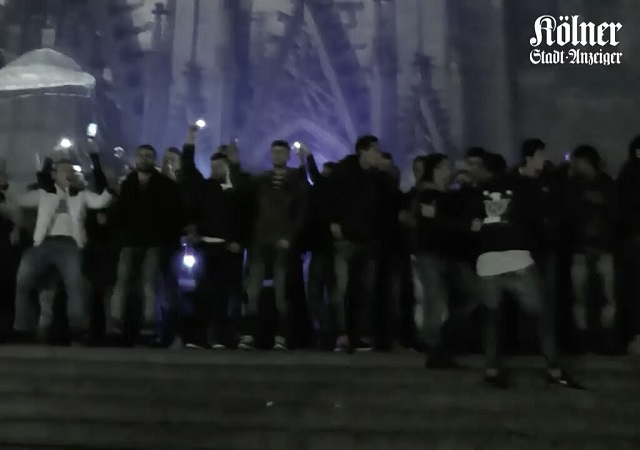 Despite Merkel government’s all-out effort to prevent the breakdown of law and order in German cites ahead of the New Year’s Eve, wide cracks are appearing in country’s police preparedness.

What reads much like a dispatch from a lost battlefront, the union of police officers in the eastern German state of Thuringa has penned an open letter describing the dire state of affairs amid an unstoppable migrant crime wave. “[You] are abandoning us to a superior force,” says the desperate note addressed to Interior Minister of Thuringa.

Time and again representatives of the police union have pointed out the dramatic consequences to the politicians and higher authorities, the letter further says, (Quote) “But what changes? Nothing. One instead gets a sense of disinterest.”  [Author’s translation]

Things aren’t any better in Ruhr region encircling the city of Cologne either. “Have foreign clans turned Ruhr region into a No-Go-Area area?” leading German newspaper DIE WELT asked on Wednesday. “Police won’t win a war with us because we are too many,” representatives of Arab community warned the police in city of Gelsenkirchen located in Ruhr.

German politicians and media are still in total denial when it comes to country’s deteriorating law and order situation. German mainstream media denies the existence of no-go-areas in the country, calling them “hotspots” instead and referring to Arab gangs patrolling German streets as “Streetcorner Societies.” Words better suited to describe a hipster hangout, rather than Arab-held gangland.

DIE WELT reported the proceeding of the commission set up to look into mass sexual assaults in Cologne: :

Are there lawless areas in [state of] North Rhine-Westphalia? [commission asked]

Police Commissioners of Duisburg und Essen as well as the Chief Mayor of Gelsenkirchen gave a clear answer to that: No.

However, Elke Bartels, Police Commissioner of Duisburg and Frank Richter, Police Commissioner of Essen, described Lebanese criminal clans that have been creating trouble for a number of years. “A section of the family is taking on the entire [German] penal code,” Commissioner Richter acknowledged. The problem is further compounded by thousands of South-East Europeans [Turks?] unwilling to integrate in the society.

With Merkel government and German media still churning out happy talk on mass-migration and supressing reports in rising migrant crime wave, things are destined to go from bad to worse for the law enforcement and people on the street. Chancellor Merkel, her ruling alliance and German elites remain politically committed to their “Refugee Welcome” policy. Insulated from ground reality, a poll in July found that nearly 60 percent of Germany’s business and political elites supporting Merkel’s open border policy.

As the desperate plea of the police union suggests, German government has chosen to ignore the plight of law enforcement. With News Year’s Eve fast approaching, is Germany heading for the repeat of last year’s mass-sexual assaults?

It is now more than evident that Merkel and German establishment don’t care about the victims of their failed “refugee” police, but do they seriously think, they can withstand another Cologne-like disaster?

It’s not just Germany that has imported this problem.

Here’s a story about Muslims in London blocking streets, and demanding the establishment of a caliphate:

From the leader of the Muslim mob in London: “World domination at hand. We can take out these fools.”

The thug has one thing right: the idiot politicians who allowed these Muslim hordes to invade Europe and live off the European taxpayers, while plotting their deaths, ARE fools.

Thuringia is a bit like Germany’s version of ‘fly-over’ country, with a couple million citizens who can be ignored politically.

Sounds like a perfect place for the Muslim invaders to establish a toehold, kinda like Michigan in the US.

My last visit to Michigan family took me through Westland and Dearborn for the first time in at least twenty years. ! ! ! Talk about change. Next time I’ll wear my burqa.

The invasion is almost at an end, all that is left is the Islamic government to take command.

Merkel vowing to remedy the deadly cancer she imported en mass into Germany is as big a joke as California re-electing Governor Jerry Brown to remedy the terminal chaos he caused in an earlier term.

Europe will soon be in a state of civil war.

Obama/Jarrett have worked hard to import the same cancer into the U.S. – or was it the Russians import masses of radicalized Islamists into the U.S.?

I have a feeling the Germans are going to really, really regret the day they allowed themselves to be disarmed.

I have seen estimates that there are 4 times as many illegal unregistered firearms in Germany as there are legal ones.

Right now only far right gangs are fighting these Muslim gangs. If the government does not deal with the problem, the moderate Germans are going to move Right and join in.

Interesting. I have family over there who live in Bavaria. They’ve been farmers for generations, and the younger boys/men have no experience with guns nor any interest in guns. Their attitude regarding guns is similar to what you’d expect from a prog in San Fran here. Opa has a shotgun that he uses to protect his chickens, but that’s about it as far as the “gun culture” that I see over there. Of course that’s just the narrow view of my German family, but it’s striking to me because I grew up in the Midwest and EVERY SINGLE farmboy that I know there is an avid gun enthusiast.

Germans definitely have a “warrior gene” in them, but their society was largely emasculated after WWII. It will be interesting to see if “nature or nurture” wins out here. They need to pull their heads out of their asses before it’s too late.

I’m thoroughly amused by all the smug commentary about how Europe has gotten into such a mess. I’d really like to see how long any of you would last in the BLM-dominated areas of Chicago, St Louis, etc. We didn’t have to import it, we let the Left tell Minority Urban Youths that all whites are racist and deserve whatever they get.

Wall off the no go zones and allow nothing in or out.

No. You send them back if they break the law.

Germans are pretty good at that.

They were courteous, professional, helpful if you asked for directions and they treated me with respect. However, they also expected to be treated with respect.

They’ve gone through a couple generations of Government-school-led pussification since then, just like we have.

Ditto; 15 short years after your own experience, I, too, found the German police to be polite and discerning but absolutely professional. You did NOT want to mess with them.

“. . . the union of police officers in the eastern German state of Thuringa has penned an open letter describing the dire state of affairs amid an unstoppable migrant crime wave.”

In my lifetime I never thought that the Germans, having learned from history, would ever want to hear of tragedies happening on an Eastern Front ever again.

The German government is delusional & will remain so until it’s replaced.

It is deeply disturbing to watch Germany (along with the rest of Europe, pretty much) commit suicide by rolling over on its back and exposing its flabby, yellow belly ~

One can see the results of their actions, but what’s in it for Merkel, et al? Why do they allow it when little good comes from it? Money or political capital is changing hands somewhere……

If the police union is a police union, why don’t they strike for tolerable working conditions?

Under ordinary circumstances a police strike in Germany would have no public support. But under these conditions? Who knows? The government might fall.

It is time, in these areas, for the Citizenry to step up and form vigilance committees, stage pogroms, and take the law into their own hands. To do otherwise, is to leave the law in the hands of the barbarian invaders. The primary, and arguably the only duty of government is to protect its Citizens. We give up some of our freedom in exchange for that protection. A government that cannot or will not perform its basic function forfeits its validity and its right to exist. Where the government has no validity, it is the Citizens’ right and duty to replace it with a government that will protect it. Gangs, vigilance committees, lynch mobs, and similar activities are crude forms of government put in place to protect the Citizens.

Until the people do this, or overthrow the government that is neglecting them, it’s their circus. Their monkeys.

When their country implodes, we must absolutely seal our borders against European refugees. Let them stay home and fight or die. Euronate on them. We don’t want their disease, here. We have enough of their kind already.

I wonder how long it will take for Germany and others
(Norway, Swiss and others ) to finally rise and
and expel or destroy these invaders and the
pols that allowed it.