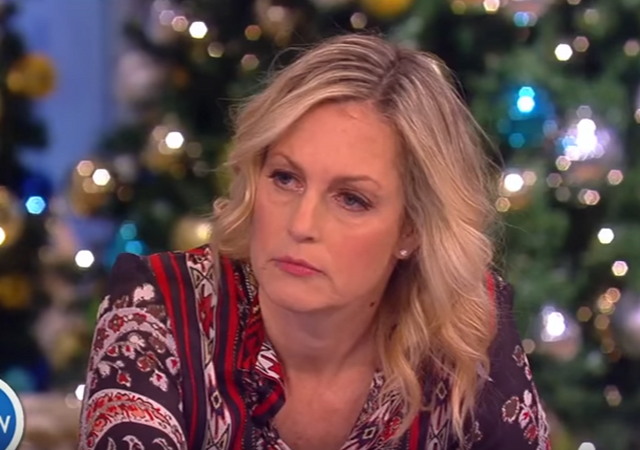 You may recall one form of the left’s post-election hysteria was “what do we tell the children?”

That died down as recounts and Russian conspiracies took over but Ali Wentworth, the wife of ABC News reporter (and former Clinton staffer) George Stephanopoulos, appeared on The View this week and explained the horror the election has caused for her children.

While discussing the 2016 presidential election with the hosts of ABC’s show “The View,” Wentworth described how her daughters were handling Hillary Clinton’s loss.

“I have an eleven-year-old daughter who doesn’t really understand what ISIS is but she knows that she is scared and she is now sleeping in bed with us every night,” Wentworth said.

“Yeah, so what do you do? You got little girls, you see what’s happening,” co-host Whoopi Goldberg responded. “What can you say to other parents who are at their wit’s end with their children who are scared, and they’re also scared as adults?”

Wentworth responded to Goldberg before she continued describing the distress her children have felt since election night.

“It just involves my fourteen-year-old getting upset about the election and screaming ‘no abortions’ really loudly,” Wentworth recalled.

As you can imagine, this set off quite a reaction on Twitter.

Twitchy collected some of the best reactions:

OMFG. These people are all mentally unbalanced. https://t.co/LA9sm5kDhn

Oh wow. What have those poor children been indoctrinated into? Lord, have mercy. https://t.co/lmnn8uxDFg

This is shameful parenting. https://t.co/h4JIuFc6cZ

It is rather sad, isn’t it?

How is that search for real estate in Australia going Ms. Wentworth?

What do you say to the children? Well, my mom told me to get out to the barn and muck the stalls or I wouldn’t get any dinner.

“I have an eleven-year-old daughter who doesn’t really understand what ISIS is but she knows that she is scared and she is now sleeping in bed with us every night,”

So now trump is retroactively responsible for ISIS?

And that twerp Stephanopoulos is stuck with her, eh?

It’s very understandable – if you remember Steph’s longstanding ties to the Clinton family, you’ll know he was counting on a really cushy administration job for the next 8 years. (Probably Secretary of Banning Conservative Media or something similar) So it’s not a surprise the entire family is distraught at the result of this election.

Yeah, how do you explain to your 14 yo daughter that you were flat-out lying, when you said you would move to Australia if Donald Trump won?

She also needs to learn that her father lies on TV every day, and gets paid for it.

We do not watch the news in front of our 12 year old daughter… We work hard to make sure that she is not overly exposed to political points of view.

Sometimes when she asks about something like she did ISIS. My wife and I told her they were bad people who live very far away and that it is an adult issue…

It’s real painful when you think you have “a real bead on things” .. then you find out your completely wrong.

I used to think all those stories, like in the movie “Contact”, where the populace goes nuts when faced with a paradigm shift (i.e. alien contact or a SMOD ‘Sweet Meteor Of Death’) were bumpkin, but the last month tells me they were understated.

I just think of that great line from Men in Black: “A person is smart. People are dumb, panicky dangerous animals and you know it.”

Sadly way too many of our “snowflakes” weren’t ever taught how to break away from the herd and actually use their brains. Or worse, they were specifically taught to stay with the herd at all costs, even if their lying eyes tell them the herd is headed over a cliff.

Remember Tommy Lee Jones in that Will Smith movie, “Men in Black?” A person is smart, people are stupid.

Too many folks crossing the line from person to people.

I’m having trouble figuring out what is the sickest angle in this whole child-raising debacle.

Saw this the other day.
All I could think was God, those poor kids have such a screwed up mother!!

The saddest thing about this article is that people like this are allowed to reproduce! It breaks my heart to think of two liars like this raising children to be liars like themselves.

Think of the skills that Chelsea must have learned from her mother and step dad.

There is an entire way of thinking, or emoting I suppose it’s best described, that is entirely foreign to me. And I believe it was most clearly expressed by our current preezy. Who said he didn’t want his daughters, then nine and six, punished with a baby if they “make a mistake.”

Obama claims to be Christian. I don’t think he’s a “secret Muslim.” It’s not for that suspicion I know he can’t possibly be a Christian. You just can’t say the things he says and have any faith in Christ.

Obama does not believe that. He said so.

“I will tell you that I don’t believe in gay marriage, but I do think that people who are gay and lesbian should be treated with dignity and respect and that the state should not discriminate against them. So, I believe in civil unions that allow a same-sex couple to visit each other in a hospital or transfer property to each other. I don’t think it should be called marriage, but I think that it is a legal right that they should have that is recognized by the state. If people find that controversial then I would just refer them to the Sermon on the Mount, which I think is, in my mind, for my faith, more central than an obscure passage in Romans. That’s my view. But we can have a respectful disagreement on that.”

I think we can all agree Obama didn’t mean a word of about what he thought about gay marriage, or anything about “respectful” disagreement.

But if you’re a Christian, there can be no disagreement that there’s no such thing as an “obscure passage” in Romans. Even worse, Obama is saying, not implying, that scripture can contradict itself. This is an impossible thing for a Christian to say. All scripture is given by the inspiration of God; theopneustos. God does not contradict himself.

He is, in short, a complete fraud.

The reality of the fraud of “Barack Hussein Obama” (or whoever he really is) will be slapping otherw0se oblivious people in the face in the coming days.

“And the King will answer them, ‘Truly, I say to you, as you did it to one of the least of these my brothers, you did it to me.'”

Who are the least of Christ’s brothers? Obama, if he had his way, would let them die in a utility closet with the rest of the biological waste, should they survive the abortion.

Mrs. Steph once famously predicted that George’s next job would be “sitting in the West Wing”. That didn’t work out, so now she does part time work being a crazy person?

And she really has a bad case of Resting Hillary Face.

What an ignorant yenta.

It’s way beyond sad that they’ve brought up a 14 year old girl who is apparently obsessed about her access to abortions.

The girls should be glad they weren’t sacrifices to the Democrat Church of Abortion. I wonder how many of their aborted sisters and brothers were?