Gene Simmons of KISS to Celebs Freaking Over Trump: Shut Your Pie Holes

Gene Simmons of KISS to Celebs Freaking Over Trump: Shut Your Pie Holes

“He’s the new president, that’s the end of the story.” 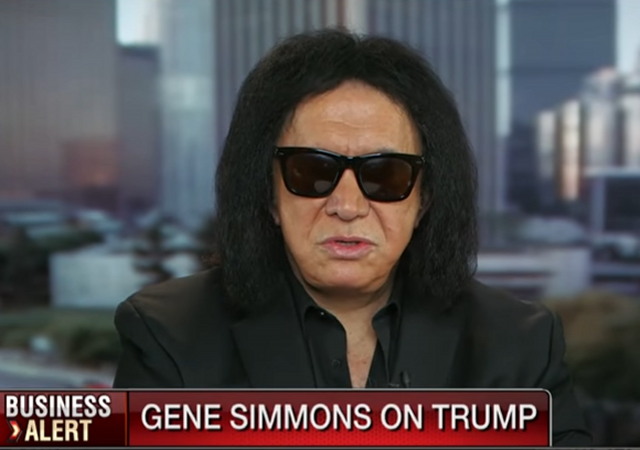 Not everyone who works in the entertainment business is a liberal. KISS front man Gene Simmons definitely leans right and he has some words of advice for liberals in his industry who are freaking out over Trump. Shut your pie holes.

He made the remarks in an appearance on the FOX Business Network with Charles Payne:

KISS front man Gene Simmons thinks it’s time for celebrities to keep their political opinions to themselves—especially when it comes to the results of the 2016 presidential election.

“I think celebrities should basically shut their pie holes and do what they do best—act, sing, tap dance… all that kind of stuff,” Simmons told the FOX Business Network’s Charles Payne.

Simmons, a former school teacher who plays bass in the legendary rock band that is known for songs “Beth” and “Rock and Roll All Nite” added: “President-elect Trump is the president. You can like it, you cannot like it. He’s the new president, that’s the end of the story.”

Simmons, whose real name is Chaim Witz, was born in Israel and has defied his industry over Israel boycotts.

The Weekly Standard reported in 2011:

Gene Simmons, a cofounder of the rock band Kiss, recently returned to his native Israel, after a 52-year hiatus. Unlike other entertainers who have boycotted the Jewish state, such as Elvis Costello, the Pixies, and Pink Floyd’s Roger Waters, Simmons expressed his support for Israel.

“The countries they should be boycotting are the same countries that the populations are rebelling,” Simmons told the AP, suggesting that the entertainers who boycott Israel should place a more critical eye on other nations in Israel’s neighborhood. “People long to be free … And they sure as hell don’t want somebody who’s a ruler who hasn’t been elected by them.”

It’s rare that a celebrity says something insightful on political matters. Perhaps the rest of the people who are paid to entertain should heed his aadvice.

So I’m curious as to why Gene Simmons is being asked to give his opinion on Fox Business?

Seriously? Gene Simmons? The man whose claim to fame is to paint himself to look like a harlequin, scream into a microphone, wear spiked boots, and stick his tongue out? KISS music sucks in the first place.

Why on earth would a semi-respectable business news organization call on a aging drug-addled (former or not) singer for a band playing terrible music and ask him his opinion on anything? His sage reply being for them to shut their pie-holes?!?!?!

I refer to the news organization as semi-respectable because they ask people such as Gene Simmons for their opinions as if we were to be listening to The Pope or Gandhi or the Dali Lama or something.

Well, with the track record of the current pope on issues temporal, he’s not much better than any of the celebrities. Francis should stick to matters spiritual for a while.

Maybe because his net worth is $300,000,000. He obviously knows a bit about money or knows someone who does.

“Gene Simmons, best known as the demonic bass player of legendary hard rock band KISS, is above all else a very successful entrepreneur.

He is the business architect behind the band that he told CNN Money he believes, from the endless merchandising and touring since 1973, is worth somewhere between $1 billion and $5 billion.

He’s the owner of the LA KISS arena football team, Simmons Records, the Cool Springs financial services firm, and Rock & Brews restaurant chain, among other ventures. He also starred in the “Gene Simmons Family Jewels” reality show that ran for seven seasons on A&E, and gives motivational speeches at corporate events. He has unabashedly focused his life on building the Gene Simmons brand.”

I’m curious as to why your analysis applies only to the celebrities that disagree with you.

And your “semi-respectable” dig at FOX is telling. You don’t judge the validity of a point on its on merits, you check first to see if MiniTru has declared the source to be an Unperson.

Which is ironic, because it’s why statements by the “popular” crowd in Hollywood resonate with you to begin with. The target the American public with their appeals to conformity because of people like you. Do you have any thoughts of your own? Or do you just adopt whatever the in-crowd tells you is “cool”?

Try to understand that when “Gwen” lectures you about some Cause, she is expecting you to confuse the characters she has portrayed with herself. But she’s just an actress. She’s simply parroting what her PR agent told her to say, so she can get invited to the right Hollywood parties and sit on the right director’s couch. With her ankles behind her ears.

Don’t you remember the Drama kids from high school? Fun crowd, but the only advice they had worth listening to was where to score some good weed. This is them all grown up.

Start thinking for yourself, stop advocating nonsense simply because The Pretty People told you to.

Mr. Fen, do you get all of your exercise by jumping to conclusions? I never said I didn’t agree with him I just was “curious” why they chose to quote Gene Simmons, a freaky drug-addict (former or not) who was in a band that I especially disliked because the music quality was a 0.005 on a scale of 0 – 10.

You read one single comment from me and then just assume that you know everything about me including my childhood.

You must be in great shape after all of that jumping.

I must have made the same life altering mistake that Fen made. I respectfully apologize for thinking you are a dipshit. It was an honest mistake.

“these are semantics but I’m not anti-semantic …”