How a misprinted number started a Christmas tradition. 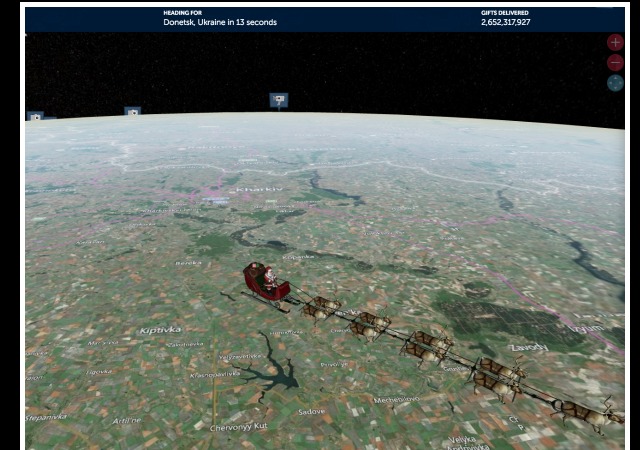 The North American Aerospace Defense Command (NORAD) has already started to track Santa Claus as he travels the world tonight to bring presents to kids around the world. It has become a tradition for 61 years, which has evolved with technology, allowing parents to show children the exact location of Saint Nick.

A Colorado Springs department store advertisement in a local store printed a number for children to call the North Pole to speak with Santa. But something got lost in translation and the wrong number appeared in the ad. Instead, the paper printed the number for the Continental Air Defense Command:

One morning that December, U.S. Air Force Col. Harry Shoup, the director of operations at CONAD, the Continental Air Defense Command–NORAD’s predecessor–got a phone call at his Colorado Springs, Colorado, office. This was no laughing matter. The call had come in on one of the top secret lines inside CONAD that only rang in the case of a crisis.

Grabbing the phone, Shoup must have expected the worst. Instead, a tiny voice asked, “Is this Santa Claus?”

“Dad’s pretty annoyed,” said Terri Van Keuren, Shoup’s daughter, recalling the legend of that day in 1955. “He barks into the phone,” demanding to know who’s calling.

“The little voice is now crying,” Van Keuren continued. “‘Is this one of Santa’s elves, then?'”

The phones would not stop ringing and Shoup eventually calmed down. He recruited “a nearby airman and told him to answer the calls and, Van Keuran said, ‘just pretend you’re Santa.'”

Of course, as technology advanced, more kids have access to track Santa and those at NORAD can’t handle all the calls. Volunteers come into NORAD’s Colorado Springs headquarters to answer calls and reassure children that Santa is well on his way.

NORAD came into existence in 1958, which took over tracking Santa for the world. The organization’s website explains how officials perform this tough job:

It all starts with the NORAD radar system called the North Warning System. This powerful radar system has 47 installations strung across Canada’s North and Alaska. NORAD makes a point of checking the radar closely for indications of Santa Claus leaving the North Pole every holiday season. The moment our radar tells us that Santa has lifted off, we begin to use the same satellites that we use in providing air warning of possible missile launches aimed at North America.

These satellites are located in a geo-synchronous orbit (that’s a cool phrase meaning that the satellite is always fixed over the same spot on the Earth) at 22,300 miles above the Earth. The satellites have infrared sensors, meaning they can see heat. When a rocket or missile is launched, a tremendous amount of heat is produced – enough for the satellites to see them. Rudolph’s nose gives off an infrared signature similar to a missile launch. The satellites detect Rudolph’s bright red nose with no problem.

The third system we use is the SantaCam. We began using it in 1998 – the year we put our Santa Tracking program on the Internet. NORAD SantaCams are ultra-cool, high-tech, high-speed digital cameras that are pre-positioned at many places around the world. NORAD only uses these cameras once a year – on 24 December. We turn the cameras on about one hour before Santa enters a country then switch them off after we capture images of him and the Reindeer. We immediately download the images onto our web site for people around the world to see. SantaCams produce both video and still images.

he last system we use is the NORAD jet fighter. Canadian NORAD fighter pilots, flying the CF-18, take off out of Newfoundland and welcome Santa to North America. Then at numerous locations in Canada other CF-18 fighter pilots escort Santa. While in the United States, American NORAD fighter pilots in either the F-15s, F16s or F-22s get the thrill of flying with Santa and the famous Reindeer – Dasher, Dancer, Prancer, Vixen, Comet, Cupid, Donner, Blitzen and Rudolph. Even though Santa flies faster than any jet fighter (Santa actually slows down for us to escort him), all of these systems together provide NORAD with a very good continuous picture of his whereabouts.

“You’ve got second and third generations … of people that are now tracking Santa,” he [NORAD’s Chief of Integrated Communications, Michael Kucharek] said. “They get together during the December 24 evening and throughout the day just checking to see where Santa is. They do it as a family. It’s become a holiday tradition for a lot of people.”

Um, the terrorists have drones, you know.

Santa Claus, like all pilots, gets regular visits from the Federal Aviation Administration, and the FAA examiner arrived last week for the pre-Christmas flight check.

In preparation, Santa had the elves wash the sled and bathe all the reindeer. Santa got his logbook out and made sure all his paperwork was in order. He knew they would examine all his equipment and truly put Santa’s flying skills to the test…

The examiner walked slowly around the sled. He checked the reindeer harnesses, the landing gear, and Rudolf’s nose. He painstakingly reviewed Santa’s weight and balance calculations for sled’s enormous payload.

Finally, they were ready for the checkride. Santa got in and fastened his seatbelt and shoulder harness and checked the compass. Then the examiner hopped in carrying, to Santa’s surprise, a shotgun.

“What’s that for?!?” asked Santa incredulously.

The examiner winked and said, “I’m not supposed to tell you this ahead of time,” as he leaned over to whisper in Santa’s ear, “but you’re gonna lose number two (engine) on takeoff.”

Merry Christmas to everyone who loves the holiday, and what it means.

And a happy triggering to those who don’t.