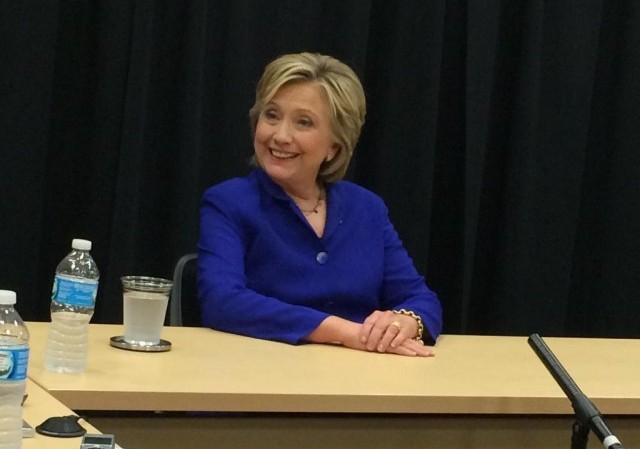 Well, look at this! Politico has revealed that those in the electoral college who wanted to cause a ruckus on Monday kept in close contact with Hillary Clinton’s top aides Jake Sullivan and Jennifer Palmieri. Politico reported:

The first conversation appears to have occurred on Nov. 29, when Sullivan and other aides joined a conference call that included Colorado elector Micheal Baca, a member of a group working to persuade Republicans in the Electoral College to abandon Trump. Baca relayed the group’s long-shot strategy: to persuade Democratic and Republican electors to unite behind an alternative candidate to Trump.

In an email after the call, Baca apologized to Sullivan for his urgent tone.

“Not at all! We all share a sense of urgency,” Sullivan replied. “Look forward to being in touch.”

The next day, after Baca updated Sullivan on the group’s progress, Sullivan wrote that he personally believed the Clinton campaign should not be involved because it might send “mixed messages.” “But I’m consulting with our leadership,” he added.

Logs do not show further communication between Baca and Sullivan. But Baca did attempt to persuade Hillary campaign chair John Podesta to back his group’s efforts. Podesta never answered back.

But Palmieri showed plenty of interest in staying in touch with Baca:

The two spoke by phone for 15 minutes on Thursday, according to a log of the call, four days before the Electoral College vote. Two days later, while Baca was in Washington trying to drum up support, he and Palmieri had a short text message exchange in which Baca made what he described as his “final plea” to the Clinton team for assistance.

“I know I will have done everything I could to stop Trump but I am just a guy at the end of the day,” he wrote. “Thank you so very much and I’ll trust whatever happens was the right decision.”

Palmieri replied, “I hear you. Are you doing a press conference today?”

Baca described an event he was planning at D.C.’s Sylvan Theater and asked whether she’d suggest any messaging. “What are you planning to say?” she asked. After Baca provided a short summary of his remarks, there was no further response from Palmieri.

Baca also reached out to electors in Washington state. He messaged Washington state elector Bret Chiafalo on Facebook, which led to the “Hamilton Electors, a group intent on preventing Trump from winning the Electoral College vote.” The group wanted to “persuade Democratic and Republican electors wary of Trump to unite behind a mainstream Republican alternative such as Ohio Gov. John Kasich or 2012 GOP nominee Mitt Romney.” They only needed 37 of the 306 Republicans within the college to defect.

Their efforts died, though, and in fact did the exact opposite. Hillary lost more electors on Monday than Donald Trump.

Baca kept his word to Palmieri, but not to the state of Colorado. Baca voted for Republican Ohio Gov. John Kasich moments after he took an oath to vote for Hillary Clinton. Electors at the Colorado capitol booed and shouted at him for defecting. Baca now faces prosecution.

Hillary lost four voters in Washington. Three of them voted for former Secretary of State Colin Powell and one voted for Faith Spotted Eagle, an elder in the Yankton Dakota tribe.

Maine and Nebraska “split their electoral votes.” In Minnesota, elector Muhammad Abdurrahman voted for Se. Bernie Sanders. Officials replaced him with an alternate, who in turn voted for Hillary.

After the shenanigans, Brian Fallon, Clinton’s former campaign spokesman, “called the effort a ‘half-baked’ idea that Clinton officials never believed would succeed.” Yeah, someone show him the conversations with Sullivan and Palmieri.

And then that sweet loveable lady lost again.

Early on, as my Walker or Cruz preference faded away, I began to support Trump, largely because the people he was likely to appoint would be much more acceptable than Hillary’s vile creatures like Podesta.

As the campaign progressed, I thought, My, but this Palmieri person is odious.

And then after the election, an unhinged Palmieri went shrieking at Kellyanne Conway at the Kennedy School of Government’s post-mortem, and my impression was doubly confirmed.

May Palmieri spend her remaining years in the political wilderness.

You can read that any way you wish.

A filthy party and a thoroughly corrupt candidate.

While this remains the Best Election Ever, we can’t forget just how closely the country dodged the bullet this time. And we can’t always rely on that special Providence which protects children, drunkards, and the United States of America.

Contact, you say, with the Clinton people? Well, color me shocked.

Know what folks…. she lost. She is gone. How about a hiatus on photographs of this nasty bitch.

Baca should be prosecuted for false swearing.

But ultimately, Colin Powell, the guy (among many) that Hillary tried to blame for her email server, got more votes than Jill Stein.

It took a while, by at last, the truth …

So, what state laws did those electors violate, and will they be punished?

This has a significant stench of Conspiracy to it also.

And the sole purpose of the whole thing was essentially a coup.

The purported laws they broke are unconstitutional, and if any state is so foolish as to try to prosecute them it will learn so. I’m surprised that the Colorado AG felt comfortable slapping the 10th circuit in the face, by doing exactly what it said it was confident he wouldn’t do. That’s not contempt, exactly, but it can’t be good for him.

After a tough but fair election, it is good and honorable to “close the book” and let the country heal.

After a corrupt effort at a coup by the Democrats, it is good to “throw the book” and let the country heal.

I hope these Democrat party “leaders” serve jail time. The fines would only be paid by Soros.