How does an ‘educator’ get away with saying such a horrible thing?

A professor at Drexel University says the only thing he wants for Christmas is the genocide of white people.

George Ciccariello-Maher is an associate professor of politics and global studies, and a self-described “radical political theorist.” In a Tweet posted late Christmas Eve, Ciccariello-Maher said his biggest wish for the holiday season is the genocide of white people. Ironically, Ciccariello himself appears to be white. 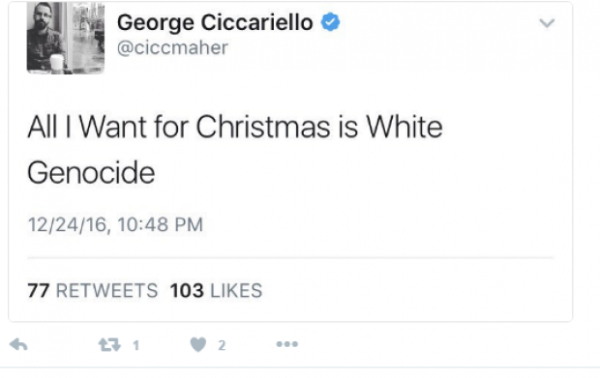 (3/6) which was posted on his personal Twitter account on Dec. 24, 2016. While the University recognizes the right of its faculty to…

(4/6) to freely express their thoughts and opinions in public debate, Prof. Ciccariello-Maher's comments are utterly reprehensible…

Hopefully, the karma truck he meets won’t be damaged.

(5/6) and he is terminated effectively immediately(?)

If he really wants a genocide of white people, those of us with the means could declare open season on white liberals and get the ball rolling.

That is so unnecessary since they are scared of Trump and taking up prepping and there will undoubtedly be numerous hatchet accidents. LOL! The bellyaching will only get worse when they eat the dehydrated chow then drink water. Don’t ask….I was very young.