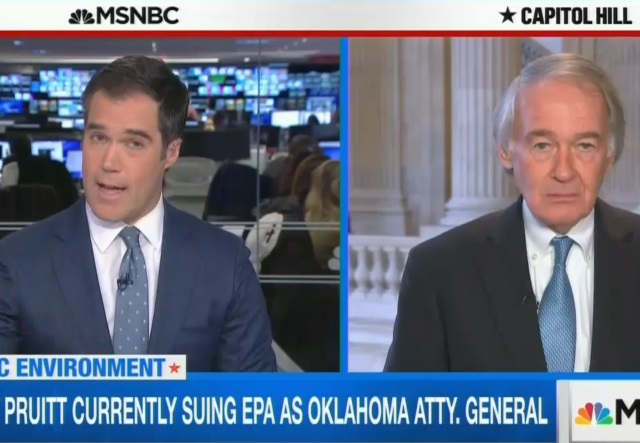 My, my: such a violent metaphor. Aren’t the Dems the peace ‘n love party? On MSNBC today, regarding the nomination of Scott Pruitt as EPA Administrator, Dem Sen. Ed Markey of Massachusetts threatened “a confirmation hearing that has razor-blade sharp edges.”

To which guest-host Peter Alexander stunningly responded: “as the Sierra Club told me last night, they said this is sort of like putting an arsonist in charge of fighting fires.”

Note: Alexander wasn’t merely reporting the Sierra Club’s statement. With his preface—”as the Sierra Club told me”—Alexander seemed to be adopting the slanderous simile as his own.

ED MARKEY: This is going to be such a controversial confirmation process. He is just plain wrong on the science of this issue, and the more that the American people learn about his views, is the higher the profile of these issues are going to become and as a result, I think, endangering his confirmation. When you’re talking about the water and the air that goes into the lung, the bodies, of the children of the United States, and this man does not believe there is a danger, then this is going to be a confirmation hearing that has razor-blade sharp edges. We will not allow this man to bring the EPA to its knees.

PETER ALEXANDER: As the Sierra Club told me last night. They said, this is sort of like putting an arsonist in charge of fighting fires.

Neither the Sierra Club nor Markey are held in high esteem.

The more upset Markey gets the happier I will be. There absolute destructive environmental regulatory behavior over the last 8 years is about to be exposed and flushed. Get the popcorn.

The environmentalists’ propaganda is a double-edged scalpel that exposes the special interests of the green, clean industry to public and legal scrutiny, and may justify its partial abortion and perhaps planning/cannibalization.

That said, after the twilight of peculiar and extremist interests, perhaps the dawn of rational and reasonable.

I suppose that’s less threatening than the Nobel Peace Prize-winning Dem who once said: “If they bring a knife to the fight, we bring a gun!”

How will Markey create sharp edges? That guy is as dull and dim as they come.

He would probably move to North Carolina expect for that pesky rest room law.

Predictions:
1) Whatever nominees Trump puts forward that the Dems deem ‘controversial’ will then be used as cover to slip dozens of other nominees through the process without any press coverage at all while the colorful firestorm is underway. (A variant on the magician trick of ‘watch this hand while the other one is doing the action’)

2) It would not shock me when Trump has Nominee A stalled in the Senate to work out a deal with the leadership for the Senate to go into Recess for several days, giving Trump the ability to recess appoint Person B into the position while Nominee A is taking the heat. Particularly if B is one of A’s trusted subordinates from previous employment. Then when A is confirmed, he steps right into the position that B has been holding for him, with most of the preliminary work done already. As far as I know, there’s nothing contrary to the appointment process in doing it this way, right? (other than making the Dems blow a fuse, which I consider a plus.)

I wonder if Trump will go with Obama’s tactic with rejected nominees: “Didn’t like that guy? Stand by; here’s someone you’re going to like even less!”

Guess what the democrats can not stop his confirmation!

Man do I love watching the lefty’s meltdown! 🙂

….or like putting someone who hates America as President. But, we survived that.

The GOP could adjourn Congress and everyone could get a recess appointment.

No, recess appointments are only for a year. There *have* been a number which could be considered “We’ll put you in right now and deal with the actual approval process over the next year” but in practice, appointing somebody to the position even while they’re undergoing the approval process gives the appointee very little time to do the job to which they’re being put.

As for back-to-back multi-year recess appointments, I don’t *think* they are technically in violation of the constitution, but I’m fairly sure they haven’t been done.

But speaking of recess appointments, there’s a red alert coming up. The senate has to take a recess on January 3rd, because that’s when its term expires. The new session begins when Biden swears the new senate in. And that’s an intersession recess, so there’s no minimum length. 0bama could use it to make appointments that will last until the end of the 2017 session (not the 2018 one, because the 2017 one will not yet have begun).

MARKEY: “When you’re talking about the water and the air that goes into the lung, the bodies, of the children of the United States, and this man does not believe there is a danger, then this is going to be a confirmation hearing that has razor-blade sharp edges.”

Please note the weasel word wizardry. Markey does not say that American children are being hurt by polluted air and water, he doesn’t even mention pollution, offering only a vague appeal to unstated and unspecified “danger”.

Public health problems due to pollution and/or ‘global warming’ is a scientific claim, amenable to scientific quantification and qualification. So……. where’s your scientific evidence, Senator? Got any? Vague warnings of unspecified ‘danger’ aren’t going to cut it. And Senator, are you certain using American children is sufficient? Maybe it would help your empty argument to include puppies and baby unicorns?

What’s the issue here? He said it might affect the lung of children, no problem they have two each. But he can bluster all he wants, it just takes one nuclear option to pass a candidate. After that maybe the Democrats will be more open to actually working with others across the aisle?

Peter, Markey, and the Dems will ultimately end up being severely and publicly butt-hurt after being on the receiving end of Pruitt’s razor-sharp schlonging. Them (Dem?) new Republican EPA chief peter marks will leave lovey-dovey markeys on tender Liberal and Sierra Club donkey @sses ^_^

While I love Trump’s picks so far, and I know the nuclear option is available (assuming McConnell has the nads to release it) I also remember that we have several republican senators who are more than happy to march to the democrat drummer, including McCain, Graham and McConnell himself.

The nuclear option is not needed for exec appointments or non-supreme judges; Reid already used it, so the rules now don’t allow filibusters on those items.

“and the more that the American people learn about his views”

Ha. That’s exactly what you said about Trump 3 months ago.

You don’t speak for Americans, and you obviously don’t understand them.

Ask him about Flint water and the Animas river

The Democrats continue the Borking practice that started under Biden .