Debbie Reynolds passes a day after the death of daughter, Carrie Fisher

Debbie Reynolds passes a day after the death of daughter, Carrie Fisher

“She wanted to be with Carrie.” 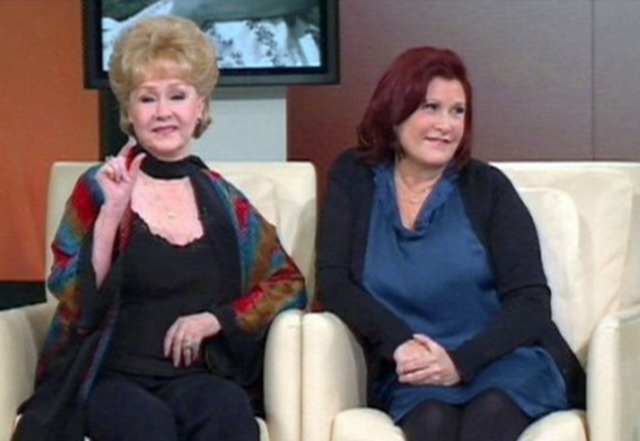 As Kemberlee Kaye so eloquently demonstrated in her post, This Christmas, few relationships are as defining as one between a mother a child.

Apparently the loss of her child yesterday was more than legendary actress Debbie Reynolds could bear. She passed away of a stroke, less than 48 hours after her daughter Carrie Fisher died from a heart attack.

Debbie Reynolds — who rose to stardom in “Singin’ in the Rain” and quickly became a staple among Hollywood royalty — died Wednesday as a result of a stroke, TMZ has learned … just one day after her daughter Carrie Fisher passed away … this according to her son Todd.

Debbie was rushed to a hospital shortly after 1 PM when someone at the Beverly Hills home of her son, Todd, called 911 to report a possible stroke. We’re told Debbie and Todd were making funeral plans for Carrie, who died Tuesday of cardiac arrest.

Reynolds came to fame at the tender age of 19. She won an academy award for her portrayal of the Unsinkable Molly Brown, in a movie about uncultured country girl who becomes wealthy but then finds herself having to fight for acceptance among the elites she then encounters (a film that I think I must rewatch given current events). Fans of the hit Titanic may recognize the name, as Molly Brown was a heroine who helped rescue many of her fellow passengers.

Reynolds lived through one of the most widely-covered divorces in Hollywood history. During an episode of Oprah, Carrie Fisher humorously recounted the reason for the divorce, which was her father’s affair with Elizabeth Taylor.

However, after enjoying the support of an adoring public after the divorce, and marrying a second time, Reynolds was able to make peace with Taylor on a trans-Atlantic cruise and recounts their renewed friendship in a 2013 interview.

‘I invited Elizabeth and Richard to our suite for cocktails and I don’t think we even mentioned Eddie Fisher more than in passing,’ she says. ‘We drank champagne and had a lovely time.’

From then on, according to Reynolds, they shared ‘many happy times’ but for all their renewed friendship Taylor seems to have been unable to forgive herself for the betrayal.

…“I’m so sorry for what I did to you with Eddie,” she said one day. “I just feel so awful when I think of how I hurt you and your children.”

Reynolds also tried her hand at some business adventures, including a Hollywood movie memorabilia museum and a hotel, which weren’t terribly successful. She was also the former president of The Thalians, an organization dedicated to mental health causes.

No matter the reason for Carrie Fisher’s heart attack, the heartbreak of losing her daughter surely contributed to Reynolds death today.

“She wanted to be with Carrie,” her son Todd Fisher told Variety.

Our condolences to the family in this time of grief.

As much as Debbie Reynolds will be missed, I’m so glad she is with her daughter in a better place

2016 has been a rough year and yet Kanye wins again…

Carrie would joke that her Mother was upstaging her one last time.

It used to be interesting following celebrities’ lives and demises, but their – for the most part – enabling the most vile, corrupt and hateful anti-American politicians have made hearing anything about them (let alone patronizing their media products) quite nauseating.

Their disfunctional lives and their deaths are no more important – in fact, less so – than that of any American soldier or police officer or other responsible citizen.