The warehouse, residence, and workplace of local artisans, was a tinderbox. 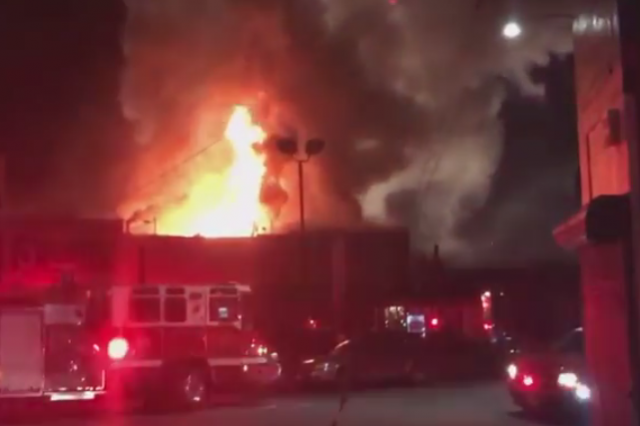 Investigators are working to determine the cause of a massive warehouse fire that claimed the lives of over 30 young adults who were attending a party.  The facility housed a community of artisans in Oakland, California.

The warehouse where at least 36 people died in a massive fire Friday night has been deemed too unsafe and unstable for emergency workers, prompting fire officials to temporarily halt search efforts that have now stretched into a fourth day.

Alameda County District Attorney Nancy O’Malley said a criminal investigation team is involved, which means the site of the warehouse fire is a potential crime scene.

Melinda Drayton, battalion chief for the Oakland Fire Department, said at a news conference Monday morning that crews stopped searching overnight after noticing that a wall at the back of the building was leaning at an alarming angle. The search was halted just after midnight, Drayton said, adding that once it resumes, “we absolutely believe that the number of fatalities will increase.”

Officials now believe that the deadly fire started at the back of the warehouse. But Drayton said Monday that significant investigative work is still ahead. “We are no closer to finding a cause,” she said.

It is reported that the party had over 100 guests in attendance when the flames erupted. Survivors are sharing the horrors of their experiences:

Nikki Kelber, a resident of the warehouse that housed artist studios, said she was asleep Friday night and “woke up to smoke and an entire wall of fire.”

“I started walking toward the front door and I called for help and I don’t know that anybody could hear me with the music,” Kelber said. “Minutes later, the power went out, so everyone who was inside was trapped in the dark.”

…Another survivor, Carmen Brito, described “15 feet of flames literally.” She recalled “just being hit in the face by black smoke that I was immediately blinded by and made my eyes water.”

“I couldn’t breathe, and [the smoke] was so strong that it actually opened my window, which then brought all this oxygen into the space, which just fueled it and made it worse, and that’s when the power went out,” Brito said.

How could this happen in Oakland, one of the most highly regulated areas in the country and one which is loaded with bureaucrats and inspectors? One factor is that the facility, which was the defacto home of several people and housed artisan shops, was a tinderbox poised to ignite. 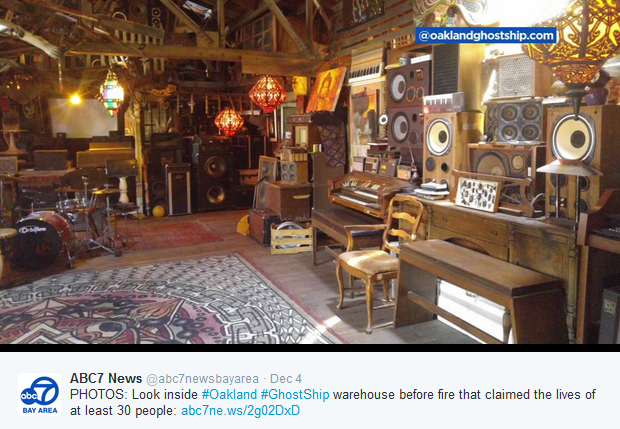 Photographs from the Tumblr page of the warehouse, known as the “Oakland Ghost Ship,” depict a maze-like structure, filled to the brim with wooden furniture, couches, colorful drapery, tapestries, Persian rugs, antiques and a host of other relics stacked floor-to-ceiling in several rooms. Photos also showed old pianos on the floor and promotions for weekly DJ events.

Another consideration in determining the potential cause of the inferno is that the “Ghost Ship” had a history of citations, violations, and complaints that were not fully resolved.

Numerous formal complaints were filed about the building, according to city records, which included a 14 November “housing habitability” charge regarding “illegal interior building structure”.

…Last month, the city of Oakland also issued a violation notice related to a “blight complaint”, records show. That citation referenced garbage “piling up on the property” and items left on the sidewalk.

“Some of trash was hazardous,” the complaint said, adding that the problem was creating a “health issue” for the neighborhood.

The last, and perhaps the most significant, contributing factor is the utter lack of affordable housing in the Bay Area…driven by the regulations and taxes associated with that region of the country. It made living in a run-down, unpermitted fire trap seem like a the sole option.

…Carmen Brito, one of the people who lived at the warehouse, told TODAY that, “At some point, when you need somewhere to sleep at night, it doesn’t matter whether you have a piece of paper telling you if that’s OK or not.”

“I think the thing you have to understand about the Bay Area is that it’s incredibly difficult to find housing,” she said.

Life safety rules are often established after a tragedy, such as in the historic Coconut Grove Fire and the Triangle Shirtwaist Fire. However, rules are meaningless when they are ignored or not enforced. But too many rules that drive up the cost of business and living are no solution, either.

The names of seven victims have been released, and more will follow in the next few days as investigators try to match the remains with the identities. Such a sad end to so many vibrant, creative, young lives. I am sure there will be many lessons to be learned from this incident, but at a dreadful cost.

Current evidence to support that – the most recent 60 minutes piece about “Google suits” where people unaffected by accessibility regulations still profit from the scam.

We like laissez faire but we hate the inevitable tragedies that arise from it. On the other hand, even with the most rigid system of safety rules won’t eliminate the chance of tragedy to zero. Something bad will always happen and then there will be an outcry for more regulation. It’s in our nature to want to fix problems. Is there acceptable level of suffering?

Listening to the radio yesterday afternoon, it’s obvious this fire is going to enrich every firefighter, coroner, litigator and whoever else can attach themselves to this boondoggle for as long as they can milk it. Only in America!

My community, like many, has a volunteer fire company. I’m not sure how they are enriched by something like this.

That’s just cynical talk. What evidence is there that “every firefighter…” will milk this “boondoggle”? The only ones that will profit will be attorneys and the victims, perhaps.

Don’t forget survivors of the deceased. And their claims are not necessarily “milking” anything.

There are few cases that a tort lawyer gets a jones about than death in a fire. The only other kind is decapitation in an accident.

Every juror can relate to the horror of dying in a fire.

Try and put on a haunted house without your first visitors being the Fire inspector… followed by 20 other government officials.

For the reason for that, read the story again.