Wouldn’t Want Nuthin’ to Happen to Your Little Company There 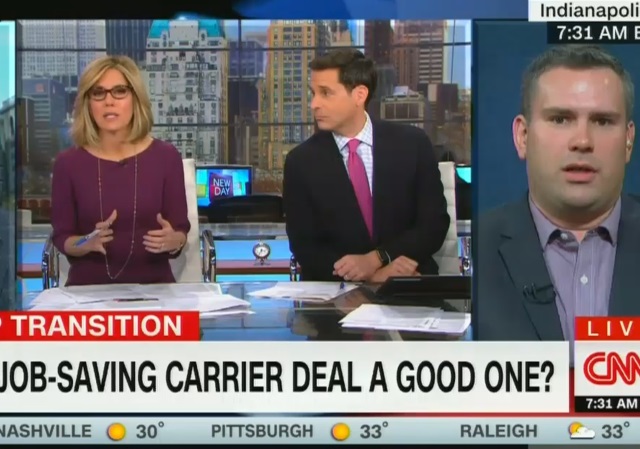 Nice little company you got there. Wouldn’t want to see nuthin’ happen to it . . . CNN’s Alisyn Camerota suggested this morning that Donald Trump used a “threat” against United Technologies to get its Carrier subsidiary to agree to keep manufacturing jobs in Indiana.

Even the Indianapolis Star reporter who had criticized the deal as being “an extremely expensive campaign promise” took issue with Camerota’s suggestion of a “threat.” CNN: the network that would depict President-elect Trump as using mob-boss tactics.

In keeping the jobs in Indiana, was United Technologies taking into account its broader relationship with the Trump administration? No doubt. But Camerota’s suggestion of a “threat” took things to an ugly level foreshadowing the kind of coverage President Trump can expect from CNN.

JAMES BRIGGS: One thing you have to remember when thinking about this deal is Carrier estimated that it was going to save $65 million per year by moving to Mexico. So, $7 million over ten years from the State of Indiana wasn’t necessarily a decisive factor in keeping that factory here in Indianapolis.

ALISYN CAMEROTA: So something was a decisive factor, meaning possibly whatever threat they used: the federal government may be drying up some help for United Technologies.

BRIGGS: I wouldn’t use the word threat. But, certainly, sources have told us that United Technologies, the parent company of Carrier, values its relationship with the federal government. It’s a big federal contractor, it has a lot of exports and it also is concerned about regulatory policy and tax policy and it wanted a say in the Trump administration on those issues.

Carrot and Stick negotiations. It’s how the tough negotiators work.
So, what? Would you rather 1000 people be out of work?

Would you rather 1000 people be out of work?

If it means Trump failed, there are a lot of people who would.

After all, the incumbant president said there was no way to stop Carrier from moving to Mexico (I don’t think he even consitered talking to them) having the incoming administration do what he said was impossible is just an added tweak of the nose.

See “No such thing as a free lunch”.

This is a pure stunt, using corrupt politics and crony capitalism.

You idiots are happily overlooking the costs. But that’s life in T-rump world.

Yup. This is the first time in the history of the world that goodies were offered to keep or create jobs.

I’ll remember that the next time I’m in the donut counties around Indy and pay that extra penny on the dollar for my sausage McMuffin to help gazillionaire Jim Irsay have a nice new Lucas Stadium for his thugs to play in.

Or that 10 year tax abatement that Big Blow demanded and got from our locals to plant 145 500 foot tall spinning, blinking monuments to Gaia in our back yards.

Do they teach math down thar in Texas?

Whether its 800 jobs or 1100, even @ around $35,000+/year each, that money is being used to buy gasoline(road tax), property tax, (in many cases), sales tax, “hospitality”tax (see above comment) personal state income tax, county tax, and probably more than just a bit of “sin” tax.

Since this didn’t cost you Texans a dime, what’s your problem? The majority of Hoosiers don’t seem to mind. Why should you?

Camerota has always been a colossal idiot, repeating whatever the first narrative about an incident is. She never stops running her mouth. She’s a blowhard moron.

I remember a time when the Federal government was required to purchase Made In USA for almost everything and couldn’t buy something not Made in USA if an equivalent product made here was available.

We need to put that law back in place.

It still is, as far as I can tell.

So now we have to worry about the civil rights of “special snowflake” corporations.

No. We have to worry about basic property rights, market economics, and the drive by the Collective to undermine them for political expediency.

And it doesn’t matter which tribe of the Collective is doing it.

I guess I missed that part of the Constitution that guaranteed every business a federal contract.

There you go! Levin on Sell-out Sarah’s sound perceptions of the crapulent Carrier deal.

Nice Monty Python lede, Luigi, I mean Mark!
“You ought to be careful, Co1onel. ‘Cos things break, don’t they?”

… the federal government may be drying up some help for United Technologies.

Hypocrisy is inseparable from a leftist.

I bet she pays over sticker for her cars.

Carrier gave up $65 million in savings to gain a $7 million state tax credit. In what world does that make business sense, unless a share of the larger $65 Billion corporate contract is at risk?

Carrier was willing to suck up that expense (and end up passing it on to future purchasers of gas furnaces) to ‘have a say in the Trump administration’ about tax and regulatory issues.

How is this not either a shakedown or another example of corrupt crony capitalism? If a shakedown, then Camerota was right. If cronyism, then Trump is undraining the swamp. Either way, it’s a bad deal for America. Sad!

“How is this not either a shakedown or another example of corrupt crony capitalism?”

Those are not mutually exclusive – it’s both. United Tech, owner of Carrier, has a large portfolio of federal government contracts, the loss of which could cripple them financially, so that’s your shakedown.

The crony capitalism is in this sort of ‘pay-to-play’ deal where Carrier/United Tech gets to keep their federal contracts along with the Indiana state tax credit, while Trump/Pence get a sweet little PR victory during the pre-inaug lame duck period.

This is not what outsiders do. This is what politicians do.

What politicians do is what Obama did, nothing or like Solyndra where his cronies made half a billion. Politicians don’t worry about working people. 7 million dollars tax break over 10 years comes to almost nothing compared to how much taxes is paid by the people who still have jobs and the payouts in food stamps, unemployment insurance, welfare etc. to the 1000 if they lost their jobs. Politicians make deals like NAFTA where the US is disadvantaged on every deal and Americans are screwed. They don’t make deals that are aimed solely at helping the working middle class Americans.

Calm down. First of all, politicians DO care about working people – if only when doing so or appearing to helps them politically. This matches the Carrier deal. As for who got what in this deal, keep in mind we have only the details that United Tech/Carrier and the Trump folks have given us. All of a sudden we are to place blind trust in politicians and corporations?

In the bigger picture, it never ends well when the government picks out a company and makes it a winner with tax money and/or credits. While there may be an occasional lucky success, generally it is a sinkhole of failure. For example, my home state of North Carolina and our neighbor South Carolina are forever in bidding wars to woo major corporations. Some the tax & benefit giveaways have been laughably bad. But hey, it’s tax payer money, not real money.

Even Sell-out Sarah knows a phony “deal” when she smells one.

And THIS is s stinking, phony, crony deal, as anyone with any integrity has to admit.

Trump is a businessman. Obama is a community organizer. See the difference, Camerota?