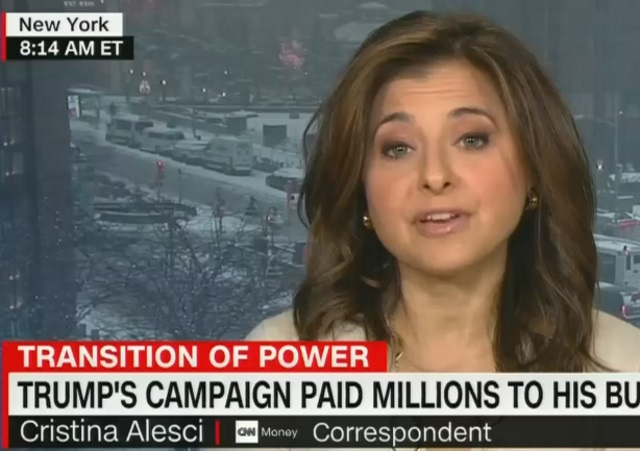 Relying on an “expert” who turns out to be a former Obama aide, CNN this morning compared the Trump family to “corrupt regimes around the world.”

Asked by host Christi Paul whether the presence of Trump family members in official meetings with foreign heads of state and business leaders posed an ethical problem, CNN reporter Cristina Alesci said “a number of ethics experts said, yeah, it’s a serious problem. A number of outspoken experts are comparing the Trump’s family behavior to corrupt regimes around the world.”

The only “expert” cited was former Obama aide Norman Eisen, seen in a clip saying “this is not the first time this has happened. I’m just shocked it’s happened in the United States.”

CHRISTI PAUL: The President-elect has also been including his children in official meetings with heads of state and leaders of major US companies, so a lot of people are saying, does this pose an ethical problem? And if so, how serious a problem is it? CNN Money correspondent Cristina Alesci is live from New York with us trying to answer that very question. What have you found in your research there, Cristina, and good morning to you?

CRISTINA ALESCI: Good morning. I spoke to a number of ethics experts and they say, yeah, it is a serious problem. In fact, a number of outspoken experts are comparing the Trump’s family behavior to corrupt regimes around the world . . . One of Trump’s biggest critics on this is Norman Eisen, who worked on government ethics for President Obama. He’s warning that this kind of behavior really undermines democracy.

NORMAN EISEN: The problem with it is, it sends a message that if you want to have influence in the administration, do it through the kids. And there’s a tradition. This is not the first time this has happened. I’m just shocked it’s happened in the United States.

What did Eisen think about Secretary of State Hillary Clinton conducting a pay-to-play scheme with her husband, former President Bill Clinton?

The Clinton Crime Family (CFF) are preparing Chelsea to run.

So far she seems to have better ethics than her parents, but give her time to deal with the real world.

“So far she seems to have better ethics than her parents, but give her time to deal with the real world.”

I am not disputing that. My question is, what is the evidence? She is so well protected by the media and therefore out of the spotlight it is hard to tell. Beside making a few speeches for her mother, for a decade or more she has essentially been behind the curtain, so to speak.

“she has essentially been behind the curtain”

A good place to keep her.

“I am not disputing that.”

I am. She’s a Clinton. Guilty until proven innocent.

Screw these people sideways. They’d fight tooth and nail to prevent us from finding out the quid pro quo between the massive payments of “Uranium One” and the $500k Billy Jeff got before Missus Billy Jeff would help push acquire majority interest in a US uranium mine.

Again screw the family, with a sand paper condom and a certain amount of malice, which is upset they aren’t going to be able to enrich themselves AGAIN by renting out the Lincoln bedroom to the highest bidder.

And their supporters who are now all of a sudden concerned about the mere appearance of corruption. Basically the Chicago mafia, a large percentage of whom are serving time.

Sorry. I left out “Russia” and/or “Moscow” when I was discussing who the Clinton Crime Family was selling influence to. Unlike the MSM, on my part that was an oversight. I thought I had mentioned it but when I saw my comment I realized it didn’t say everything I wanted to say.

“We are appalled that they are doing this out in the open and may get away with it. Only dictators do it. You MUST do it in a clandestine way using a sophisticated legal labyrinth or you are not a GOOD American!”

1. Trump’s kids are part of his Transition Team (keywords: team, transition)
2. There is no Trump “regime”. He is not #POTUS.

Why can’t all the morons go back to California and shut up?

They don’t know Spanish so there isn’t anyone to talk to in California.

Whenever these people say “democracy”, substitute “Democrats” and you see what their real concern is.

First of all, it is very hard to give any “ethics” advisor to the OBAMA administration ANY credibility on governmental ethics.

Second, I love the selective memory of these liberal wienies. Has everyone forgotten JFK and RFK? People are going ballistic at the thought that any Trump family member may be advising the next President. But no one has, or had, ANY PROBLEM with the President of the United States [JFK] appointing HIS BROTHER [RFK] to be the US Attorney General, an actual cabinet post. In fact, it was largely cheered by the Democrats at the time. Then there was Hillary Clinton, who, as the unelected spouse of the President, RAN the WH. Do any of these people remember the WH travel office scandal, where the existing staff was fired ad replaced by Clinton cronies? The Dems were not worried about that.

The truth is that the POTUS is free to obtain advice from anyone one, at any time. Even family members.

This is just another example of Trump Derangement Syndrome in our society.

Thank you so much for publicly identifying yourselves as corrupt shills that can easily be disregarded. Consider that maybe you are not as smart as you believe you are. And that you audience is not as stupid as your bigoted stereotypes of “flyover country” suggest. We see right through these desperate attempts to deny Trump any legitimacy. And so our contempt and hatred of you grows stronger every day.

Well, I see no problem, but they might conceivably have an argument … but I can’t tell, because they’re making no attempt to actually present one. All we have here is a miasma of pronouncements.

A serious situation … of the utmost seriousness. Surprisingly serious. Shocking, even. Yes, we all agree, it’s serious. Maybe even seriously corrupt. So serious that it undermines something. And does it seriously.

So they’re just throwing a rancid old nothingburger and hoping that some of it will stick.

tom swift: they’re making no attempt to actually present one.

You’re not aware of Trump’s conflicts of interest? Trump has business interests in many different countries around the globe often in partnership with politically influence persons and businesses, owes large sums of money to both foreign and domestic banks, and even will be in violation of his lease on his hotel in Washington DC. Without access to his tax returns, there’s no telling exactly what other conflicts he may have, but they will undoubtedly be numerous and complex.

So did George Washington selling goods from Mount Vernon. Go away, kid, you bother me.

SDN: So did George Washington selling goods from Mount Vernon.

The Constitution prohibits “any present, Emolument, Office, or Title, of any kind whatever, from any King, Prince, or foreign State”. In any case, that wasn’t the question, but whether there were, indeed, conflicts of interest.

That’s nice. Too bad they’re not offering such an argument. If they were, its weakness could be addressed. Until then, it’s just an inchoate smear.

Others have been whining about “potential conflicts of interest” for a while. Potential means—hasn’t actually happened. Again, a nothingburger.

The Dems keep giving us Presidents who have never managed to actually do anything in their prior lives … but who manage to end up rich anyway. This is supposedly “good”. But, again, they fail to offer any respectable arguments why their graft and corruption is “good” but productive commercial activity is “bad”. If we don’t require the President to be a recluse or hermit, we’ll have to accept someone with a lifetime of history already behind him. And some of that will be commercial. Until those commercial interests oppose the interests of the United States, I personally won’t get terribly excited about it.

Translation—don’t bitch to me about “potential” conflicts; find some real ones, and I’ll listen.

tom swift: That’s nice. Too bad they’re not offering such an argument.

Huh? Emoluments is the talk of the town.

What a weak premise. Everything you state is not a conflict as long as he is no longer running his businesses.

casualobserver: Everything you state is not a conflict as long as he is no longer running his businesses.

“Trump has business interests in many different countries around the globe often in partnership with politically influence persons and businesses, owes large sums of money to both foreign and domestic banks, and even will be in violation of his lease on his hotel in Washington DC.”

Meh. Trump is also a Nazi, a founder of the Illuminati, and is conspiring with our Alien Overlords to harvest the people of New Jersey.

We need to address these more important issues first. It could mean the Apocalypse for all of us!

But let’s not kid ourselves here. This is just another example if the deranged lefts double standards. Dies anyone recall the left banging on like a fat chick smashing a packet of smarties about hiLIARy’s conflicts with the Clinton Crime Foundation? No of course not because that is fine BUT a Republican…OMG!!!!

Didn’t BJ have Hillary as his copresident? Who objected to that?

Someone needs to take away their shovels.

On second thought, scratch that.

who worked on government ethics for President Obama.

That right there tells me there’s not even a smidgen of corruption around Trump.