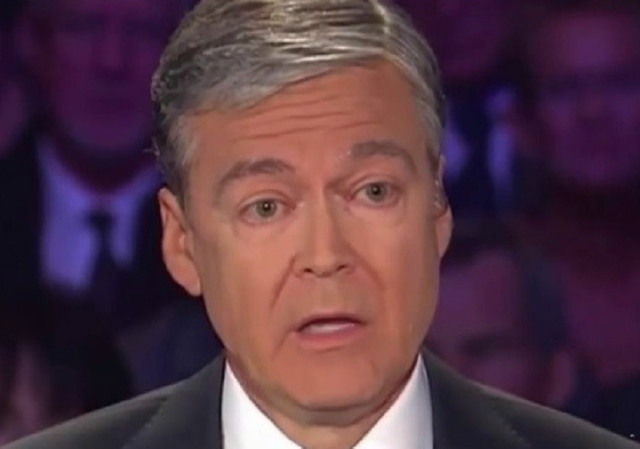 Add CNBC’s John Harwood to the long and growing list of liberal media types who still have no idea why Trump won and the Democrats lost.

You may recall John Harwood as a member of the worst team of debate moderators ever. You may also know that Harwood was exposed by Wikileaks for sucking up the Democrats during the election.

Now he’s floating a new theory about why his party lost.

CNBC host John Harwood argued on Twitter Tuesday that the Democratic Party suffered electoral losses under Barack Obama‘s leadership in part because of “white fear” in the age of the first black president.

Harwood took exception to the arguments from some that Obama was responsible for the Democratic losses under his tenure, including both houses of Congress, a dozen governorships, and over 900 state legislators. Harwood argued that outside forces were to blame, including the race factor.

for those making silly argument that Obama hurt Democratic Party: last 5 presidents have left both houses of Congress in opposition hands

drivers of D casualties under Obama: a) depth of financial crisis/Great Recession b) accumulated angst over 30-year income stagnation 1/2

As you can probably imagine, lots of people aren’t buying what Harwood is selling.

is there anything obama did or didn't do that contributed? Or is it all somebody/something else's fault?

are you using the same political insight and wisdom that predicted a Hillary landslide?

Liberals in media don’t seem to realize that their narrative has been exposed.

They’re sticking to it because they have nothing else.

What a freaking bozo. And yet so many of them seem to cling to life.

Did this guy escape from the Muppet set?

Doubles, triples, quadrupled down on stupid! Still wondering why dinosaur media is not belived.

And still wondering why they’re losing viewers/subscribers/money to alternate media.

I keep hearing about how Hillary lost because of racism, white fear, bigotry, racial hatred, and so forth. This leaves me confused. Hillary would likely have lost to Bernie Sanders if they had not tilted the playing field and isn’t Bernie white? For that matter, isn’t Hillary white? Where is the racism and such when one white candidate is elected over another white candidate?

Race is no longer a genetic or even a cultural construct for democrats , but instead a purely political one – thus bill Clinton or hillary are considered ‘black’ or certain political ideas are considered black and it is racist to oppose them.

Oh, it’s the color of the heart? They are certainly black hearted.

No joke, I had some lib on facebook trying to argue that Republican opposition to Bill Clinton was due to racism.

It’s in the thoughts bro.

I’m also wondering why the party of liars isn’t getting lambasted for the old white people who ran for the party nomination. Party of inclusion they proclaim.
The repubs at least had some diversity, the dems not so much.

“Liberals in media don’t seem to realize that their narrative has been exposed.”

I don’t quite think that’s what’s going on here. Instead, they’re the sort of people who believe that the world owes them the presumption of credibility no matter how many times they’ve been caught out as corrupt liars. Take Hillary and Donna, for example.

Most people would be too ashamed to show their faces in public, but these folks seem to positively flaunt their impunity.

“Most people would be too ashamed to show their faces in public, but these folks seem to positively flaunt their impunity.”

That’s because they don’t care about your standards. Instead, they regard them as weapons to be used against you.

They all go to the same parties and spend the night telling each other how great they are and how dumb everyone else is.

This isn’t the first time that John Harwood has been in bed with Democrats: In 2010, he did not deny that he had an affair, while married, with Democratic Sen. Maria Cantwell of Washington state, (though he disputed the reportt that he cried when pleading with a reporter to kill the story). Of course, it’s not likely either that when he slept with Sen. Cantwell it was the first time he’d been in bed with Democrats; that’s how one advances in this country in the so-called profession of journalism. CNBC, a business channel, has no business employing this guy.

They lost because of white democrat fear and contempt of white ‘working class’ voters.

We must have had Russian interference in the 2012 election as well as 2016. How the hell did Obama get elected twice with all those white racists in our country who were either afraid or hated (take your pick)black people?

This idiot does not know the difference between fear and disgust.

Racism – or more accurately: charges of racism – is the last refuge of scoundrels such as Harwood.

Liberals in media don’t seem to realize that their narrative has been exposed.

They’re sticking to it because they have nothing else.

But for others, there’s probably some method at work here.

Jorge Luis Borges once discussed a peculiar weakness he’d seen in the character of Americans—their terror of the idea that they might ever treat someone unfairly.

That’s what these insidious vipers are working on. Doubt. If they can get even a minuscule fraction of white voters to think that maybe, just maybe, their perfectly reasonable opinions about those scum-sucking Liberal Democrats might be inspired by the tiniest bit of unconscious racism … then they can swing elections.

However much ridicule he is getting is not enough. He deserves more.

The liberals are delusional and simply refuse to view reality sanely.

Modern liberal thought is entirely based upon three things.

1) White Americans [especially WMs] are totally biased; racially, religiously, linguistically and where gender/sexual orientation is concerned.
2)America is dominated by the prejudiced WM population, which is determined to suppress the rest of the population.
3)All non-WM groups are totally composed of honest, honorable and competent individuals and if a member of one of these groups can be elected President, then the dominance of the evil WMs will be broken and we will all live in harmony in the Garden.

This, of course, is a utopian fantasy. People, no matter what group they are affiliated with, are still individuals. Some are good, some are bad, some are competent and some are incompetent. Well, in 2008, the liberals achieved their dream. A mixed race man was elected President of the United States. However, this did not bring about the expected utopian society; brimming over with love, tolerance and brotherhood. In fact, just the opposite occurred; hate and intolerance increased, especially within the “minority” groups. And, now, the utopian liberals are faced with the reality that all of the tenets upon which their view of reality is based are false. They simply can not handle this. They are in denial and, in some cases, a state of delusion.

It is a mistake to think that all of these people actually know what reality is and are only lying to others. Many actually believe that their delusions are reality. And, they will do anything to continue that delusion, including lying to themselves.

Enough with these white hating whites and their word smithing. She lost because she was a corrupt, lying, America hater who is in poor health. She had practically no one showing up for her campaign stops. She had the media lying, manipulating and spinning all their efforts to hide the truth about her. But then, I would never expect a lefty to take responsibility for anything. It is never their fault.

If she wasn’t so woefully pathetic at managing anything, she might have pulled it off.

He means fear of the scary, corrupt white woman

It is unfortunate that the idea of Bill Clinton being America’s first black president took root. This began the era of white racism against, um, themselves.

Let this conservative call for the day when ‘race’ is eliminated as an identifier, replaced by ‘species’.

The half-wits still unable to come to grips with reality, I see.