Consumer protectionism or a litigious nanny-stating? 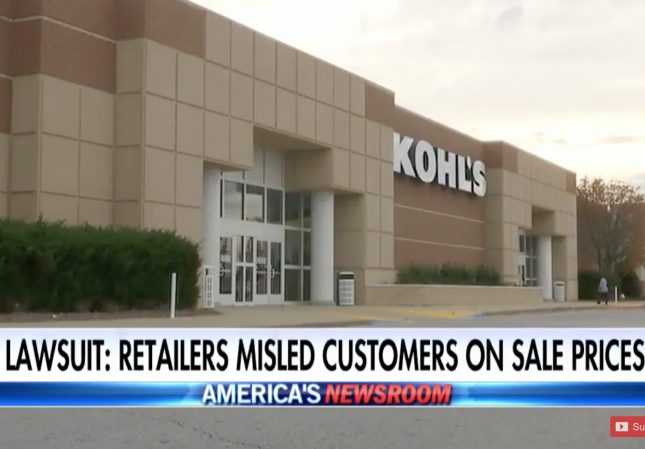 Allegations suggest the retailers deliberately increased the original price of items then placed them on sale, thus providing the appearance of false savings to would-be consumers.

“Customers have the right to be told the truth about the prices they’re paying — and to know if a bargain is really a bargain,” said Mike Feuer, city attorney for Los Angeles, in a release.

The lawsuits allege that the “misleading and deceptive false price advertising scheme” played a major role in the stores’ marketing strategies, and that the companies used false reference prices on “thousands of products.”

For instance, the lawsuit against Sears (SHLD) alleges it advertised a front-load washer with a false original price of $1,179.99, but the retailer never offered the item for more than $999.99 online in the roughly six months after it was first made available online for purchase.

The claim against Macy’s (M) alleges it misleadingly offered a cross pendant necklace at 75% off. The lawsuit claims the necklace was first made available to purchase online in May for $30 with an original price of $120. However, it’s never been priced above $30 in the five months that followed, according the claim.

None of the retailers have commented.

Consumer protectionism or a litigious nanny-stating?

It seems obvious enough that the price of an item is whatever a consumer will pay, regardless of whether the item is adorned with a big, red “sale” tag. The suits seem to ignore a basic economic principle — if you purchase an item with an original price of $100, but on sale for $75 — you have not saved $25, you’ve spent $75.

If successful, the complaint likely won’t render a hefty judgement. The civil penalty for each violation is $2,500. “California law prohibits retailers from advertising a price of an item unless it’s actually been on the market at that price within the last three months or the date when it was being sold at that price is made clear to shoppers,” according to CNN.

Los Angeles vs. Macy's, JCPenny's, Sears, and Kohl's by Legal Insurrection on Scribd

False advertising is offering one price to one person and another price to someone else. This is a bs lawsuit money grab.

They will soon be wondering where all the brick and mortar stores went. And, no doubt, come up with a plan to bring them back.

call it what it really is: a government shakedown of industry.

will all the things wrong with the City of Lost Angels, *this* is what the idiots down town are worried about?

yeah, right… when is the City Attorney up for re-election?

and how much is this suit costing us taxpayers?

When they finally settle this lawsuit – I bet the money goes to some community organizers for financial education programs for the poor i.e. “yipee, we are all getting new Lexus convertibles!”

How is the state—or the vendor—to determine what a “bargain” is? Can the state really require Sears to tell customers that the marked price of a washing machine is lower than it was before, but it’s not much of a “bargain” because Lowe’s has a better machine on sale?

Prices should be marked, of course. And I don’t see that anyone is claiming that they aren’t.

I’d believe it of Kohl’s, never believed the BS on the receipt that I saved X amount of dollars. But then again I’m not a proud holder of a Los Angeles high school GED certificate either.
Haven’t been to a Penny’s, or Sears in over 30 years. Don’t recall ever going to Macy’s. Our local Meijer’s works just fine for most of the daily living things I need.

This is common practice, even at a grocery store. If you want to file suit as a private citizen that’s fine. The government filing this suit is all about grandstanding about the evils of capitalism and power mongering by the socialist dreamers.

There’s some pretty good research that shows establishing high reference prices in a customer’s mind works surprisingly well in getting customers to place a higher value on what’s offered and thus be willing to pay more for it.

Nonetheless, customers should be smart enough to realize that no one “saves money” in a store. At least, not unless the store has a bank in it. Truly, all one can do with money in a store is spend it, and, spending is obviously the opposite of saving.

The law should work the other way – since Coca Cola used to cost 5c it can never go on sale again.

No seriously, it seems like a well intentioned but unenforceable law since any company can just change prices on its website at a moments notice, sometimes even retroactively.

People is California must need a lot of protection. LOL!

They’ll all have strokes and die.

Mark-up to mark-down has been a common practice among large retailers for the last 50 years. It was common practice to mark an item up just prior to putting it on sale. Now, no one with an ounce of intelligence would even attempt to claim that raising the price of an item 50% then offering 1/3 off is anything other than a deceptive practice, as the mark-down merely returns the product to its original price. If retailers do not want to end up being penalized for fraud, then it might be a good idea not to engage in fraudulent practices to begin with.

If were an honest merchant (where a discount is truly a discount), and my competitors were distorting the public perception with those practices, I’d be mad. I’m glad the government is trying to level the playing field for honest folks.

Is this really any different than the MSRP, which is almost always well above any actual selling price you’ll ever see?

my used 2010 marquis was a bargain for me at (with taxes/etc) 18K $
for others it was not a bargain.
getting a bargain is a beauty in the eye of the beholder scenario.

You pretty much have to be ****ed in the head to try and operate a business in Kali.

If you’re the worst state for truckers, you’re pretty much hosed when it comes to commerce.

Actually, they’re CARB regulations, not EPA. But for the most part the information is accurate.

The cost of CARB regulation is an overwhelming burden for businesses, especially small businesses. According to the California Environmental Protection Agency (CEPA), the new PM retrofits (including the filter, back pressure monitor, installation and warranty) costs anywhere from $10,000 to $20,000. California EPA…”

What the article doesn’t do, it seems to me, is make clear that Kali provided incentives to for fleet operators to a upgrade to a lower standard just a couple of years earlier. But they didn’t know it was a lower standard than CARB was going to demand in the not so distant future. So they’re out of Schlitz. So they’re one and done. They can’t afford to buy new trucks or engines.

I’d say that when you are the mayor of Oakland, and your husband and daughter are helping to blockade the port of Oakland, you have no head for business.