Sips wine while watching his compadre tag a wall 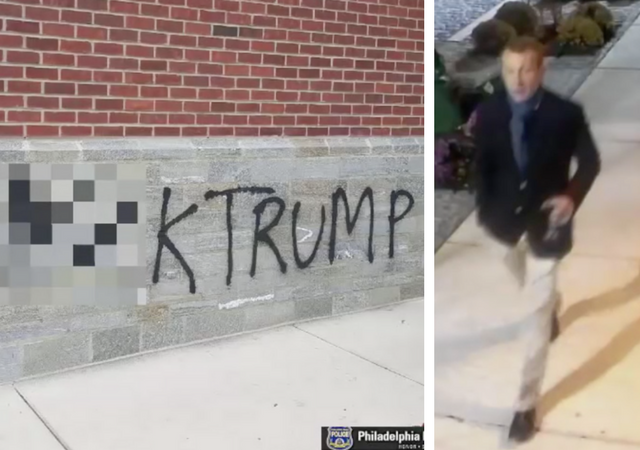 The world has truly gone mad. A Philly city attorney was busted after surveillance footage was used to identify him as a vandal. His tag read “F*** Trump”. Though it’s impressive that he perpetrated the act of vandalism while sipping wine, adorned in khakis, a blazer, and what looks to be a very nice scarf.

For now, the man still has his job:

A city attorney involved in an anti-Donald Trump vandalism incident, caught on camera, made a “dumb mistake,” and remains in his job for now Mayor Kenney said Thursday.

Duncan Lloyd, an assistant city solicitor, was identified in surveillance footage that captured Lloyd and a second man walking along Germantown Avenue in Chestnut Hill on Nov 25. In the footage, Lloyd is seen wearing a blue blazer and holding a glass of wine, filming or taking photos, while a second man spray paints “F— Trump,” on the wall of a newly opened Fresh Market.

As of Thursday morning, police said no arrests have been made in the incident and Kenney said Lloyd remains employed with the city.

“It’s still working out. It’s certainly hateful and inappropriate and unacceptable…but people are human beings and they make mistakes and it’s a dumb mistake,” Kenney said. “It’s hateful graffiti, hateful graffiti is never acceptable whether it’s a city employee or not.”

First Deputy City Solicitor Craig Straw confirmed on Wednesday that Lloyd, who has worked for the Law Department since 2011, is one of two men in the video.

“We do not condone this type of behavior from our employees,” Straw said. “To my knowledge, Mr. Lloyd has already contacted the Philadelphia police and is cooperating with them. We will decide on a course of action once we obtain more information about the investigation.”

Lloyd sipped his wine while another gentlemen scribbled “Fuck Trump” on a wall, causing between $3,000 and $10,000 in damage.

The best part of this entire story is the response from the Philadelphia’s GOP Chair, Joe DeFelice:

“If the image of an upper-middle-class city attorney clad in a blazer and sipping wine while vandalizing an upscale grocery store with an anti-Trump message strikes you as perhaps the most bourgeois sight imaginable, that’s because it is,” said Joe DeFelice, chairman of the Philadelphia Republican Party.

“Did the extra glass of Shiraz give him some sort of delusional confidence that there are no cameras on Germantown Avenue? The taxpayers should be entrusting exactly none of our faith into this man. He should be fired from our city’s Law Department immediately.”

Wishful thinking or terms of endearment? “Hateful”? The word is overused and now pedestrian. I’d have him personally removed the paint rather than have him pay a fine. Until he fully cleans up the wall, he could spend nights in the gray bar hotel.

You want hateful: This is hateful

scrub it off the wall with his forehead

He’ll get a public kick in the shins…and a private ‘good job, but don’t get caught next time’ from his boss.

Duncan Howell III has the perfect pedigree. Chestnut Hill is the toniest old money neighborhood in Philadelphia. He earned his bona fides at Germantown Friends, the ultimate limo lib Quaker den for budding 1%-er progressives, Penn in the Ivy league, Temple U law.

Mayor Kenney called it a “dumb mistake” and Proggie McBlueBlood will likely keep his job. If he’d spray painted “F Hillary” or “F Obama” he’d already be sending his resume to Idaho and our streets would be clogged with the 5th selfie extravaganza candlelight vigil against “hate.”

The world has truly gone mad.

No, Liberals have gone truly mad. Those who weren’t already.

Don’t expect it to end any time soon.

This, in a city where 70’s voting machines routinely were rigged to change some R votes to D votes, and where in 2012 some precincts reported not one single vote for Romney, does not surprise me.

Saddens me, but does not surprise me.

And black thugs carrying baseball bats beat white voters if they dare vote for a Republican candidate and get a free pass from the Uninted States government.

The local Philly press has been all over this. Tucker Carlson did a segment tonight on Fox. But Wash. Post; Times, and national TV networks have steered clear.

Walking down the sidewalk drinking wine sounds like a violation of a Philadelphia law regarding drinking in public.

You’ll have to prove that it wasn’t a wine glass containing fresh grape juice or red beet juice.

I think the blazer and dandy scarf are sufficient to prove that it was wine.

The brightest of the many bright lights in local Philadelphia government, the current Major Kenney, has placed this problem right there on the front burner. “We haven’t made a decision.”

In case you may have forgotten a Philly event of a mere 9 months ago.

A Muslim attacked, attempting to kill, a Philly cop, Allahu Akbarring all the way. The Philly police commissioner stated the would-be killer’s full Islamic motive at a press conference, reporting everything that the Muslim said about motive.

Right after the commissioner spoke, right after, Democrat Mayor Kenney said this, “In no way shape or form does anyone in this room [remember, the commissioner is standing right behind the blabbering mayor] believe that Islam or the teaching of Islam has anything to do with what you’ve seen on the screen. It is abhorrent. It is terrible and it does not represent the religion or any of its teachings.”

That looks like a stone wall with a bit of paint sprayed on it.

If the city is really planning to budget up to $10k to clean the paint off, I’d love to know how many city councilmen the contractor is related to.

So does the state bar association have anything to say about officers of the court defacing property with hate speech?

It is the sort of thing that should get you admonished (at a minimum) in the State Bar Journal and a criminal proceeding. Along with full restitution and community service.

Has anyone ever developed a clear coat for brick and concrete such that when it is spray painted all a property owner has to do is spray it down with a regular garden hose to clean it off? Figure if someone were to develop such a product it would be in high demand in a lot of cities.

This is all wrong! The guy was just trying to give his wife a street version Christmas card. Like a gift certificate of sorts.