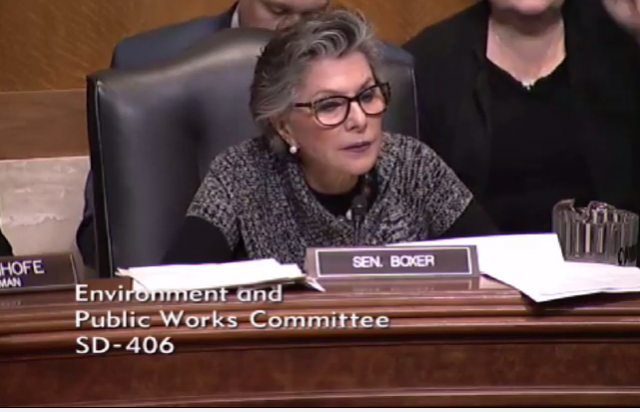 California Tea Party activists have long battled the bureaucrats and politicians over policies related to water.

One of the most well-known of the myriad of issues is the diversion of water from farms in the Central Valley (a major source of this nation’s fruits and nuts….outside of San Francisco, that is). One goal of this reallocation of a prime agricultural resource is the protection of a bait fish known as the Delta Smelt.

Last week, the House of Representatives easily passed a major water bill that includes emergency aid for Flint, Mich., and boosts U.S. ports, dams and waterways. This bill, known as the Water Resources Development Act (WRDA), was initially co-authored by the notorious Senator Barbara Boxer, who infamously derided a Brigadier General for referring to her as “ma’am”.

However, Boxer’s California compatriot in the Senate decided to include a Christmas bonus for the state’s farmers in the final piece of legislation:

Majority Leader Kevin McCarthy (R-Calif.) and Sen. Diane Feinstein (D-Calif.) successfully slipped in long-desired language to provide drought relief to central and southern California. It would temporarily relax environmental standards and instruct federal officials to divert more water to farms and other users in the federal water infrastructure in the Golden State.

Boxer spend 90 minutes denouncing the bill on the floor of the Senate, saying the revised rules would undermine the Endangered Species Act.

“I ask a no vote on a bill that would undo the entire salmon fishery on the West Coast. Don’t drop this in at the last minute,” Boxer said about amendments that were added at the last minute to an $11 billion water infrastructure bill with projects across the nation.

She then attempted to block it with a unanimous consent request to offer an amendment that would strip the drought provision. Her motion was swiftly rejected.

Our other Senator had an entirely different, and far more rational, viewpoint.

Feinstein said Friday that she came on board with the new policy after tracking daily water levels “and seeing where, if it were possible, we could have saved water without impacting fish.”

The bill states more than 30 times that the new policy does not supersede existing environmental laws, and Feinstein disagrees with Boxer’s insistence that it weakens the Endangered Species Act.

“Boxer should ask the farmers if they support this bill or the consumers that will be people who are fed by the bread basket of America our Central Valley. What exactly is this “big agriculture” that she keeps talking about? The small multi-generation farms in this state are not that, many many are dried-out, fallowing lands thanks to the ignorant failed policies of the progressives. When she is gone, I look forward to true reform for our farms. California farmers are starving for real reform.”

The bill actually passed the U.S. Senate overwhelmingly. The legislation is now heading to President Obama for signature, and Boxer is unhappy.

Feinstein and House Majority Leader Kevin McCarthy of Bakersfield, and their staffs, crafted the final water package, which the Senate approved on a 78-21 vote. They also made the hard-ball tactical choice to fold it into a widely popular infrastructure bill, which eased Senate passage while it left retiring Democratic Sen. Barbara Boxer fuming.

“I think it is absolutely a horrible process, a horrible rider,” Boxer said during floor debate Friday.

This is a fitting end to the career of California’s most notorious U.S. Senator. I only wish I could assure you her replacement would be better.

Boxer Shorts has always been a blithering idiot..>

and Kamala Harris is no different.

At least most don’t have to see her again. We are screwed here in the Coachella Valley where she bought a home. I only hope I run across her in a restaurant. Guarantee her dinner will be spoiled!
Of course even worse is coming up with Harris and Newsom. How can the people of this once great State have sunk so low?

“When she is gone, I look forward to true reform for our farms. California farmers are starving for real reform.”

Has this moron seen Kamila Harris’ career? If he thinks that Boxer is bad wait until Harris takes command! There is a special kind of stupid in CA and it just can’t be fixed! The now totally dominate Demorat state legislature has already threatened to thwart Trump at every possible turn and has talked about a secession movement. Throw in Pelosi, Feinstein, Gov. Moonbeam and now Harris, can you really say that the farmers are going to get help? One good wiggle from San Andreas and they might be an island anyway!

Will the blue parts of the state just get together and secede already?

Victor Davis Hansen has documented the decline of the once-rich California and all for the love of a little bait fish. I don’t want to wait for California to secede, I vote to throw them out (after removing the military bases, Federal offices, and remove all Federal financial support from their abysmal education system).

The problem is the ESA itself, and the worldview it stands for, that every species has the right to survive, regardless of how useful or useless it is, and this right is more important than anyone’s livelihood. If a species is of no use to anybody, directly or indirectly, then why does anyone care if it’s endangered, or even if it goes extinct? So what? A farmer going bankrupt and losing everything he and his family worked for is a disaster to be avoided if possible; a useless fish disappearing is a big nothing. The ESA needs to be rewritten to require that a species only be protected if the cost to humanity of its loss would be greater the cost of protecting it. And if it is, then the taxpayer should bear that whole cost, not the farmers.

Agree 100%. It’s also unconstitutional – I mean c’mon, an almost extinct fish can deprive you of your economic rights?

In principle, yes, it could. Certainly a similar state law could constitutionally do that. For the ESA it’s only a question of whether the law can be justified under one of Congress’s enumerated powers. Post-Wickard Congress has got into the habit of justifying everything under the commerce clause. If Wickard were to be overturned it might have to look for another basis. It could find one under the treaties clause, if there’s a suitable treaty, but I don’t think there is one.

I for one stand with the smelt!

He who smelt it , dealt it.

(Anyone who’s been smelt-dipping in the Great Lakes knows why.)

grew up in MI and love smelt …

Are we surprised? Just another liar in Washington,DC

The general Boxer berated into calling her “Ma’am” on the Senate floor should have called her “a-hole.” It would have ended his military career, but he would have then had his pick to to high office in middle America.

Maj. Gen. Michael Walsh was too nice to say BITCH. And he’s a heck of a lot smarter than the bitch.

It might make sense if she was running again and was a congress critter with a narrow constituency rather than a senator representing the entire state. One less loony tune, but it is California whack a mole.