The “unofficial” embassy is being funded by the Kremlin. 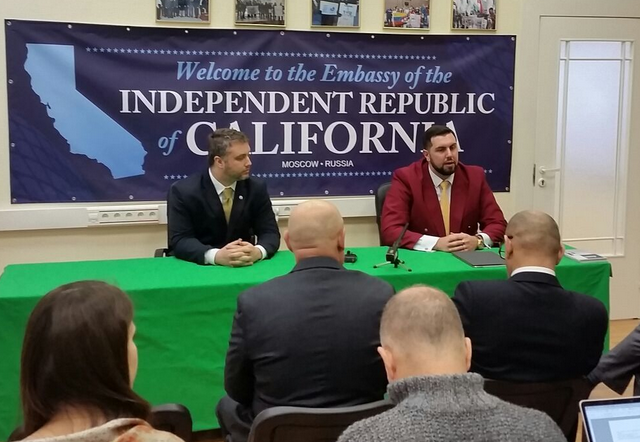 I recently blogged that the Yes, Californa secession campaign is being run by a 30-year-old American who lives and works in a city on the edge of Siberia.

Now, even before all the required signatures for the ballot measure have been collected, the chief secessionist says that a California embassy has opened in Moscow, Russia.

California gained an embassy in Russia last weekend, at least in the eyes of those who have promised to seek a statewide vote on secession, nicknamed “Calexit,” in 2018.

Louis Marinelli, a San Diego resident who is the leader of the group promoting an effort to turn the state into an independent country , organized the Moscow event that was publicized on social media.

“We want to start laying the groundwork for a dialogue about an independent California joining the United Nations now,” he said in an email Monday.

This move will surely add to the tensions between the two countries, as “Russian hacking” has been blamed for Donald Trump’s presidential election victory almost continuously for the past two weeks. And given the source of funding for Marinelli’s group, progressives in California who have held onto the belief that the alleged cyber attack made a difference in the November vote totals are going to have trouble reconciling a vote for the Russian-backed secession measure.

…Mr. Marinelli’s efforts have already secured Russian support in the form of the Anti-Globalization Movement of Russia, a Kremlin-funded group that claims to be “opposed to the global dominance of transnational corporations and supranational trade and financial institutions,” according to its website.

Alexander Ionov, the president of the movement, helped bankroll Mr. Marinelli’s relocation to Russia earlier this year, The Moscow Times reported. Next, according to the newspaper, his group will assist in operating the unofficial embassy.

“It’s not an official embassy, but a people’s embassy, between our nations,” Mr. Ionov told Life, a Russian tabloid.

Official or not, the movement and its leader are not being embraced by everyone.

Embassy of the Independant Republic of California – in Moscow ! Dude is batahit crazy https://t.co/xt7cdi8dWZ

Louis Marinelli is a self aggrandizing moron who’s tried to pass the same referendum b4. https://t.co/yO3QDBxA2d

@Michelle_888 Louis Marinelli, the Yes California founder lives in Yekaterinburg Russia. Who do you think benefits most fromnthis?

I suspect that if Marinelli has his way, the California national flag will feature a hammer and sickle. Given our state’s progressive policies, one might be already hidden in the background.

However, we are “unofficially” socialist. I suspect when the details of the Kremlin connection are revealed, and Californians unhappy with Donald Trump realize they will not succeed by seceding, that the “Yes California” movement will be full of “No.”

I assume that the Russians will be blamed for CalExit whether it succeeds or fails. Bases covered.

will not succeed by seceding

But, as a Russian client state, it would get all sorts of aid. Why, without Obamacare but with ex-Commiecare, it could have a health care system which would be the envy of even, ummm, Cuba.

Russia would love a foot hold on our western coast.

The Ruskies once had that foothold: Fort Ross. Its along the coast north of Jenner. I think it was included in the “Alaska package” the US bought. Its a CA state park now and has undergone some restoration, so the Ruskies could move right in.

the rest of the states need to have approval ready for when they pass the referendum, so they can be gone as soon as possible.

Don’t start getting your hopes up. This is happening in the same way Hillary Clinton was winning the election.

Don’t worry Leslie. We are going to allow a few people to immigrate from Califailure to the USA. You’re on the list.

Do they have a Go Fund Me account set up? I would LOVE to help their cause!

The better use of your money is to donate to Legal Insurrection, because #CalExit is not going to happen. 😀

the Russians have no need to hack #Failifornia…

we’ve already done it to ourselves.

Texas is looking better and better every day.

State secession was settled in 1865 at the end of the US Civil War. A state may not secede from the United states, at least unilaterally.

This all designed to stir up trouble by appealing to liberals, many of whom are delusional.

“Calexit” is not a problem. However, negotiating with any foreign state for assistance in securing a state’s secession may well be a criminal offense, under US law.

And if the citizens of a State succeed in a secession push, who is going to use force to keep them in the Union – the Federal Government? What force – the US Army? Unless the seceding State is foolish enough to open fire upon a federal enclave within its borders, its likely no action would be taken. The Civil War wouldn’t have started had the South not decided to use force against an insular possession of the United States – the war wasn’t about to start otherwise over slavery. And today there’s no burning issue to go to war over with a seceding State.

I believe the SCOTUS opinion declaring secession impossible is unenforceable and violates several principles of self-determination and freedom of association. Naturally SCOTUS justified the North’s forceful re-integration of the South after the war.

Sound and fury, signifying nothing.
-William the Bard.

California as an independent country isn’t going to work. California will have to join a new country, especially given how badly it’s been treated by the US, what with all those white guys east of the Rockies. Ooph. All those military bases and public universities gone. Ouch. The NHL is already cool with an international league – been that way since it began – but I’m not so sure about the NFL, NBA, MLB. I suggest learning to love de futbol.

Canada or Cuba are much better matches for California than boring old Russia. If Canada, I’d support tossing in Oregon and Washington to join California to become Canada’s 11th province, Nueva Hispania, but not Alaska. We keep Alaska. If Cuba, we could talk about Puerto Rico or maybe even Florida, except for the Panhandle, of course. You’d have Disney Land AND Disney World!

The Dem/libs are not engaged in simple, run-of-the-mill post-election whinging and whining. They have taken it to such a high level of angst-driven drama that it’s already being plagiarized for soap opera plots and general scenery chewing throughout Hollywood. Very entertaining!

Henry, we here in the Eastern half of Washington hasten to make this request, do us a favor and don’t do us any favors. 🙂

Y’all should just join us in Idaho! 🙂

“Tell Mike it was business, nothing personal…”

And its capitol is the Peoples’ Republic of Berkley.

P.S. I’m going to miss the Rongovian Embassy to the USA. Rongovia and Mythica were great places.

That should read:
“[Please note that Peoples’ is plural possessive.]”

(I with the comments had a way for the original poster to edit them, but I realize that is quite challenging to implement.)

There is a Preview button, bottom left of Comment box. Type your post, hit preview, check and edit if necessary, hit Submit.

All of the arguments are immaterial. California belongs to the United States of America, and it’s not for sale. Whatever it takes to keep it, we will do. Californians are welcome to create their own country, just not on our land.