The astronaut became sick on his trip 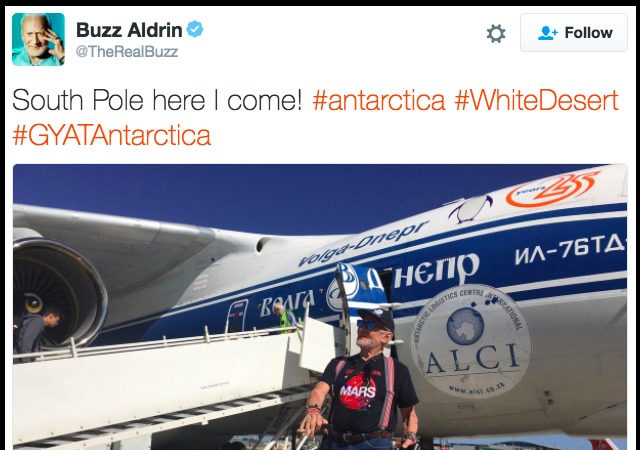 Medial officials have evacuated American astronaut Buzz Aldrin, the second man to walk on the moon, from the South Pole after he became sick on a trip to Antartica:

The 86-year-old Aldrin arrived at a hospital in Christchurch, New Zealand early Friday morning local time. According to a statement from the tour company, White Desert, he had fluid in his lungs but was responding well to antibiotics and was in stable condition.

Aldrin, who in 1969 became the second person to walk on the moon, arrived at the South Pole on Nov. 29, according to a message from his assistant, Christina Korp. He was scheduled to be there until Dec. 8 but his “condition deteriorated” shortly after arriving, according to the White Desert statement.

After a discussion between the White Desert doctor and the U.S. Antarctic Program, the National Science Foundation agreed to provide medical evacuation for Aldrin. He was flown to McMurdo station, a research facility run by the NSF, on ski-equipped LC-130 cargo planes flown by the 109th Airlift Wing of the New York Air National Guard. Hours later, he boarded a Safair cargo plane that transported him to Christchurch, where the logistics hub for the Antarctic program is located.

According to the statement from White Desert, Aldrin will stay overnight for observation at the New Zealand hospital. His manager described him as being in good spirits.

They told him not to eat the fermented whale blubber! Here’s wishing Buzz a speedy recovery.

Am I the only one to question the wisdom of letting an elderly man go to one of the harshest environments on Earth? Great for him and all, but seems to me like someone didn’t assess the risk factors properly ~