Branco Cartoon – One For All

Branco Cartoon – One For All

and all for one 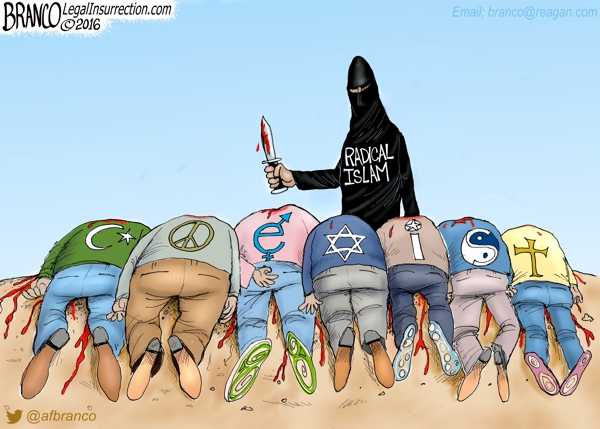 Note: You may reprint this cartoon provided you link back to this source.
For more A.F.Branco cartoons at Legal Insurrection click here.

To the growing numbers of non-Muslims who’ve become very Islamically-aware – our becoming aware being taught to us by Muslims themselves, by our watching their behavior, by listening to their rants, by reading their Quran – the phrase found on that black hoodie is rather inaccurate.

As someone who knows what he’s talking about when it come to Islam (since he himself is re-Islamisizing his country) stated, “These descriptions [e.g., “moderate Islam” or “radical Islam”] are very ugly, it is offensive and an insult to our religion. There is no moderate or immoderate Islam. Islam is Islam and that’s it.”

You mean Islamophobes? Yes, that is what it has become – those aware are now labelled as some sort of prejudicial bigot simply for knowing the enemy.

Sun Tzu is rolling in his grave.

The only religion HELLbent on global domination. While others might not mind being top dog the vast majority of major religions have moved past using force and violence to enforce their beliefs on practitioners of other faiths or no faith in particular.

Progressives deplore religion, yet they want to embrace the only religion that wants to enslave and/or kill them.

In a progressive’s mind

You left out: “If I aid them, then maybe they won’t kill me.”

Moderate Muslims are culpable. Not because they participate or anything, but because they are continually apologetic about their “religion” (in quotes because Islam is actually a cult). Moderates refuse to acknowledge that the radicals are practicing Islam as Mohammed intended it to be practiced. You can see this in his examples (through the sira and hadiths) and as ordered by the koran (verse 33:21).

Ignorance can no longer be an excuse.

Radical Islam is the true Islam created by Muhammad. The “moderate Muslims” aren’t real Muslims they are apostates.

I just define them as “orthodox” muslims. The mosque of I-17 in Phoenix is producing them weekly.
Spellcheck is demanding that I dignify them by capitalizing the name of the murderous cult.