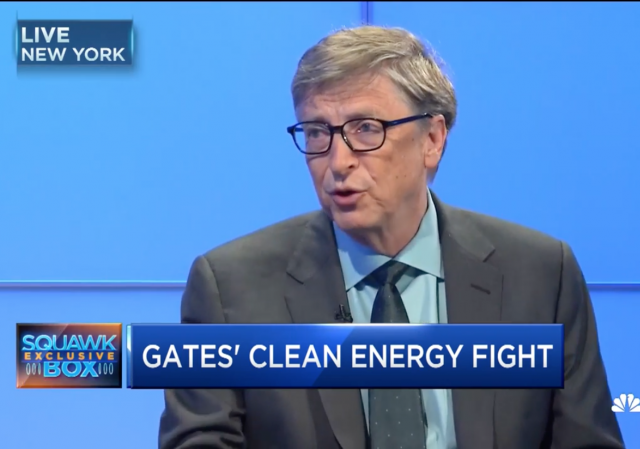 The majority of the interview focused on Gates’ latest clean energy initiatives — all privately funded through his private investment fund, stocked with fellow gazillionaire innovators.

“I think this administration likes a good deal,” said Gates, who explained he and others would feel comfortable approaching the new administration on a variety of issues like energy policy and general regulatory issues.

Gates had never met Trump despite their numerous mutual friends, but spoke with him on the phone recently. Gates described Trump as “sophisticated” and someone who has a good understanding of the business climate.

Trump was not elected because of specific policy stances, but because of his attitude towards fixing problems, Gates believes. “A lot of his message has been about…where he sees things not as good as he’d like.

Gates even went so far as to compare Trump to JFK:

“But in the same way President Kennedy talked about the space mission and got the country behind that,” Gates continued, “I think whether it’s education or stopping epidemics … [or] in this energy space, there can be a very upbeat message that [Trump’s] administration [is] going to organize things, get rid of regulatory barriers, and have American leadership through innovation.”

The market has certainly responded well to Trump’s soon-to-be official election, as have most industry-minded types.

What does Bill Gates know about innovation?
( Can you say Gary Kildall? )

He know to buy out any innovation that will compete with your own business.

There’s a lot more to ‘innovation’ than building a bare-bones product. Gates is a marketing genius, pure and simple. Hate Windows all you want, but you have to admire the way he schlonged IBM.

He clearly knows how to maximize innovation whether he architects it or buys it. He’s done both. If I remember correctly, Kildall was smart but barely a mediocre businessman.

The computer industry is 100% globally integrated now and depends heavily on Asian imports. Microsoft wouldn’t be the company it is today if the price of computers hadn’t fallen so much. We don’t know what Trump’s trade policy will be for Asia, but every indication from his campaign is that he’s not a free trader which could be a big problem for an industry that wants its hardware made in China and software made in India.

Of course even though Trump campaigned as a protectionist who knows how he’s really going to govern. Bottom line is someone will get disappointed, Trump voters or Bill Gates, and people like Bill Gates don’t get disappointed often.

And btw JFK was a free trader – he believed you couldn’t have global leadership without economic integration. You have to buy in order to sell. I think he was right mostly but made one bug mistake – the US should never trade with countries that are not politically or economically free, and yes, that includes selling wheat to Russia or buying oil from Saudi Arabia. So I would be very happy to see all of China’s electronics industry go to Taiwan or Korea or Japan during Trump’s presidency.

Gates’s notion of “innovation” is that the Americans at the top make the big bucks, while the Americans who should be bolting the stuff together sit around, unemployed.

That’s not what Trump means by MAGA. “Innovation” at the price of a functional economy is no way to do it.

Tariffs, taxes, and regulations are all under the control of the government; it’s government’s job to juggle these control mechanisms for a satisfactory—i.e., economically non-suicidal—result.

No, it’s not easy … and Bill Gates isn’t going to be the one who does it.

Whatever you ARE, you are an ANTI-conservative.

But you ARE an economics moron.