Ready for a Woodland Critter Christmas! 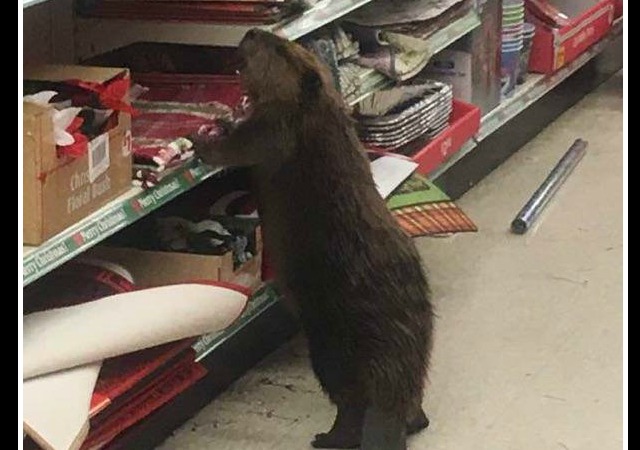 A beaver snuck into a local dollar store in Charlotte Hall, Maryland, apparently trying to find the best Christmas decorations:

According to the St. Mary’s County Sheriff Office, the beaver strolled right in through the front door and began tearing up a slew of discounted decor — but witnesses said the animal simply appeared to be in search for a Christmas tree.

“As an law enforcement officer, you just never know what you’re next call might be,” the sheriff’s office wrote on its Facebook page Wednesday.

Officers eventually “apprehended” the beaver and brought it to a wildlife rehabilitation center unharmed, cops said.

The photos of the creature rummaging through the Christmas goods have since gone viral — sparking a slew of jokes on Facebook.

“He’s going to be in trouble with the wife when he goes home without the Christmas tree,” wrote one user.

“This would be a great advertisement for that tree company,” another added. “Our trees look so real even the beavers go after them.”

Cpl. Yingling had a unique call for service when the suspect, pictured, was witnessed causing prop. Destruction at a store in Char. Hall. pic.twitter.com/6qKlu7tqA7

The beaver tweet may go viral! All joking aside, the beaver was safely rescued by animal control & was released to a wildlife rehabilitator. pic.twitter.com/0VyLXJPjxh 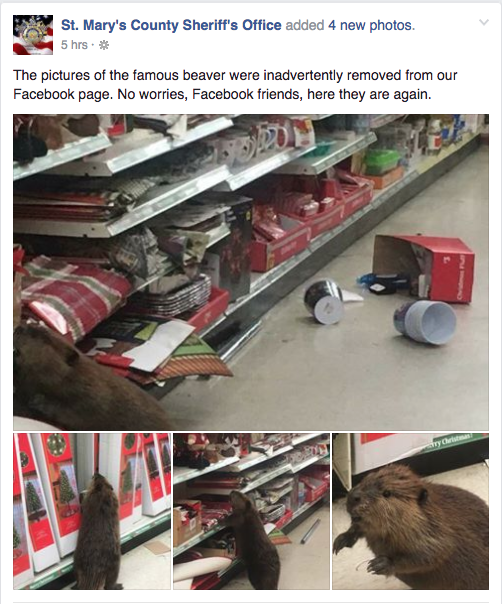 Even he knows not to shop the bottom shelf. Those are never deals, man, even though they’e supposed to look like they are. Good choice!

The Beaver was ‘safely rescued’ from the Dollar Store.

It turns out he meant to go the the Dollar Tree.

There is the possibility that the beaver is the reincarnation of Madalyn Murray O’Hair, although I thought she might return as a smaller rodent.